Ready to Receive: A Call to Adopt

Our family has a new addition!  Meet Chessie. 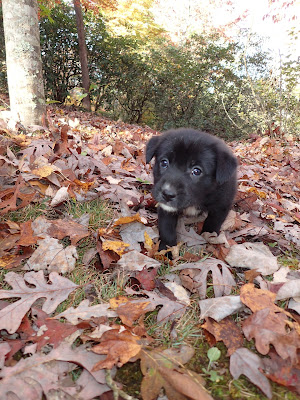 It seems appropriate that we adopted Chessie during National Adoption Month, and so I wrote a story about it.

The puppy looked at me eagerly from behind the wires of her cage.  Anxious eyes and a wagging bobbed tail expressed anticipation that she could not keep contained, as her entire little body shook with excitement and apprehension. I slid open the door to her pen and reached for her.  I knew that it was all over now.  I knew that the moment I held her, I would be hooked, and that she would be coming home with me.

I did not really want another dog.  My husband and I had already owned what we knew would be the best dog we would ever have.  A pure-bred mutt, she’d been the most obedient, gentle, loyal, and intelligent pet anyone could possibly imagine.  When we’d found her, left abandoned as a puppy on the side of a forest road, she too had shaken with apprehension mixed with excitement. My husband and I were newlyweds when we found her, and she became our first “child”.  Little did we know that she would be our only child for the next decade to come.  We named her “Sage”, in hopes that once she outgrew her puppy years, during which she acted like she didn’t have much of a brain, she would live up to her name and become a wise and faithful companion.  By the time she passed away, silently in her sleep on our front porch sixteen years later, she’d become all that and more.  She’d become irreplaceable.

Soon after we lost Sage, my children began asking if we could get another dog.  Not yet, I’d said.  Maybe not ever, I thought.  How could we replace a dog that was irreplaceable?  No other dog could ever meet the standard that Sage had set.  Besides, we had three children now, including a toddler, and that was more than enough to take care of.  Getting another dog, especially a puppy, would just add to the load.  And so, for over a year, I’d pushed back when they’d asked.  God will send us a dog when he is ready, I would say, but I certainly wasn’t going to go looking for one.  And as I tried to explain my rationalizations, I felt an old familiar feeling, and my mind went back to a memory from many years ago.

Sage was five years old in this memory, and my husband and I were in our mid-thirties.  We’d been trying for five years to have a baby and had just lost our first pregnancy in miscarriage.  I sobbed and wrapped my arms around Sage, our only “baby”.  I thought about how hard this had all been, how unfair, how perhaps I wasn’t meant to be a mother.  I thought about how old I was getting, how long it had taken to get pregnant just once, how I’d likely never get to parent more than one child, should I ever get that lucky. I thought about how my biological child whom I’d just buried, was irreplaceable.

And I thought about adoption.  But not much.  Not seriously.  God will send us a baby when he is ready, I would say to myself, but I certainly wasn’t going to go looking for one.  How could any child replace a child of my own flesh and blood?  How could I understand any child that did not share my or my husband’s biological background, with all the personality quirks and habits that our genetics express.  It all just seemed too risky, to take on a child with no real knowledge of his or her ancestry, genetics, and with having no control over the environment to which they’d previously been exposed.  Much like taking in a puppy, I wasn’t ready for that load of unknowns and unpredictability. What I was ready for was a child like the one I’d created in my mind, one that I considered irreplaceable.

As time passed, I prayed for the hole in my heart to heal, but instead, it grew bigger and bigger. I begged God to take the pain away and felt abandoned by him as my prayers for a child remained unanswered. Another year passed, and by the time it ended, I was emotionally and spiritually spent.  I had no more energy left with which to fight God. As experienced by so many of the saints, I felt trapped within my own “dark night of the soul”.  No longer convinced that my desires were those of God’s, I slowly began to surrender my plans and slowly open myself up to his.  One night, wiping tears from my face after yet another month of disappointment, I spoke the words that I had been trying to push out of my head for over a year.  “I want to adopt”, I said to my husband.  It was a moment of complete surrender for me and once I actually said the words, I realized it was the calling that I had been resisting all along.  My husband agreed quickly.  His heart ready and now, so was mine.

The healing began almost immediately.  Hopelessness turned into hope.  For the first time in years, I felt like God was hearing me again and helping me along my journey. Was this what he’d wanted all along? We excitedly began the long, arduous process of contacting adoption agencies, weighing our options, calculating the financial costs, starting a home study.  Fingerprinting, background checks, training sessions, profile books, interviews, and writing lots of checks dominated all our free time for the next few months.  None of it was fun nor easy but we embraced it all nonetheless, knowing that each step brought us closer to filling the hole in our hearts.  And then the waiting began.  Waiting to be chosen by a birthmother.  Waiting for someone to say that we were good enough to be their child’s parents.  Waiting for someone to believe that we were irreplaceable.

I thought about all those feelings as I scooped the little black and white puppy in my hands.  As she looked up at me with coal black eyes, she relaxed in my arms, just as my children had done the first time I’d held them.  Her coloring and markings reminded me of Sage, who also had been a black and white lab-mix.  But this was not Sage and I was finally ready to accept that.  I was ready to receive what God had been preparing for me.

Placing the puppy in her crate, I loaded her into the passenger side of my car and took her home to her new family.  To my family.  To three happy little boys, two of whom had come to us through adoption, and who were, without a doubt, irreplaceable.