From Halloween to Hallowtide: A Look Back

I know that with Thanksgiving approaching, Hallowtide is now just a fading image in our rearview mirrors, but before all the jack-o-lanterns turn completely into humus, I wanted to share a little about how our Hallowtide traditions have changed over the past decade.  Suffice to say that how we celebrate today is a long ways from how we started.

I still remember, with a bit (okay, a lot) of nostalgic longing, the first Hallowtide that I celebrated with my children.  After years of infertility, being able to finally celebrate with my own child was a big deal to me. That was in 2010, and I didn't even know then that Hallowtide was a thing; it was just Halloween to me, so how we celebrated was very secular, i.e., candy and costumes.  And even though we didn't go anywhere on Halloween, I still remember the joy I found in gathering up miscellaneous items around the house and making my son's first-ever costume and snapping a photo of him. My husband took delight in adding the sign to complete the outfit.

It was great fun putting together a costume for my baby in 2010, but little did I know then that a year later, I'd have TWO little ones to dress up.  This was a bit more challenging, but with a little creativity and a lot of duct tape (used only on the costume, I promise!), I came up with costumes inspired by two free plastic helmets that they got at the local fire truck parade the month before.  It was very cute and not a bit liturgical.

What I thought was challenging in 2011 became almost impossible in 2012.  This was the year I became a stay-at-home mother, and my two boys were now very mobile, very strong-willed, very exhausting toddlers. I was in full-on survival mode, hence I skipped the costumes completely and just went for the Halloween t-shirt. I think I threw some chocolate candy in a bowl for them, based upon their faces in this photo.  That year is kind of a blur, and the last thing on my mind was trying to teach my kids about saints, or feast days, or anything other than basic commands like "sit" and "stop" and "don't touch".
By the time Halloween of 2013 rolled around, I was starting to find my groove as a stay-at-home mother, as evidenced by the fact that not only were my boys back in costumes, but I also somehow managed to bake and decorate two kinds of sugar cookies for the holiday.  I'm not sure what came over me. Of course, there wasn't a saint among them, and my boys remained holy terrors. 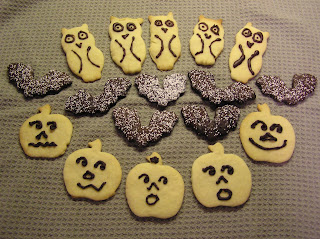 Two years into being a stay-at-home mother, I realized that it was a very rewarding gig, but I really didn't know what I was doing. My children were feral, and my attempts at trying to instill any sense of virtue in them were falling flat. So, I did what any desperate mother would do; I searched for an online community that might offer some kind of moral support and helpful advice. That was back when blogging was still popular so, I hopped on the bandwagon. I began reading Catholic blogs (and started this one) and that changed EVERYTHING. Within a few months, I had found a network of mothers trying to raise their children in the Catholic faith. Reading those blogs, I was intrigued by their attempts to bring the faith into every facet of their family life, including how they were celebrating holidays and liturgical seasons.  I found myself wondering if I should do the same.
At first, I was hesitant.  Although dressing kids up like saints seemed like a fun and catechetical thing to do, I worried about depriving my children of the secular version of Halloween, so I tried to give them both.

Halloween 2015 wasn't much different than 2014.  I was still doing two sets of costumes, still trying to take the kids trick-or-treating, and still trying to keep a foot in both the secular world and liturgical world.  It was a lot of work, but I thought it was necessary in order to keep my kids both Catholic and "normal".  Only later did I come to realize that being both a devout Catholic and normal in the eyes of society may be mutually exclusive!

And then Dominic joined our family in 2016, and I was back in survival mode with a 2-month old and two still-feral 5 and 6 year old boys.  Needless to say, something had to go, and that was trick-or-treating.   My husband and I were done loading kids into car seats, driving around in the cold rain after dark, and waiting in traffic jams and candy lines for sweet treats just so our kids could have the wonderful experience of greedily hoarding candy and scarfing down too much sugar, which took feral to a whole other level. Instead, I replaced it all with buckets of candy that I bought (and moderated) and called it all good.  It was one of the best parenting decisions we ever made.  It would be another year, however, before it finally dawned on me that if I didn't dress them up in secular costumes, they would still turn out okay.


For Halloween 2017, we continued with the tradition of carving pumpkins and eating candy (purchased by Mom), but the confidence I gained from ditching trick-or-treating the year before gave me the courage to finally do away with secular costumes completely. Instead, I encouraged the boys to put their thoughts and efforts into which saint they would like to represent for All Hallows' (Saints) Day. I thought I might be in for a fight, but once I assured Joah that I would never throw away his cat costume (and I haven't), and that he could pick a saint who loved animals as much as he does, he was all for it.  It also helped that I promised them that I would make chocolate chip "pumpkin pancakes" for supper, and while I didn't realize it at the time, a new Halloween supper tradition began.


We mostly repeated the process in 2018, but the boys kept upping their game with the saint costumes. With the time I saved in not making secular costumes, I was able to put more time into helping them with their saint costumes.  John really wanted to be "a saint with a beard", so I made a beard for Moses, and sewed a tunic for St. Francis of Assisi.

By the time 2019 rolled around, liturgical living had become for us a way of life and feast days, and saint stories, and solemnity celebrations were being incorporated into our entire year.  And although we still carved pumpkins and ate candy on Halloween, the focus of this holiday for my family had turned completely around from where it had been five years previous.  It was in 2019 that I first started referring to "Hallowtide," and our entire family was enjoying the new way that we were celebrating so much, that we wanted to share it with others.  So, that year, our entire family dressed as saints.  We all wore our costumes to Mass on All Saints' Day, and after Mass, we invited everyone to our home for an All Saints' Day party.  It was great fun, and my kids and our friends still talk about it today.


And then, in 2020, the world changed, and the idea of hosting a party in our home was out-of-the question.  It was this year, more than any other, that I was so thankful for the liturgical living traditions that we'd already established in our family.  It was also in 2020 that I realized that we had not yet fully incorporated the last piece, perhaps most important part, of the Hallowtide puzzle into our lives. Pandemic deaths seemed to be all around us now, making us more fully aware of the significance of All Souls' Day.  And so, it was in 2020 that we added cemetery visits on All Souls' Day to our Hallowtide traditions.  On that day, we visited five cemeteries. I asked the kids to choose a headstone in each one, make a chalk rubbing of the stone, and record the name of the person who it belonged to.  We said a decade of the rosary at each of the five cemeteries, then came home and added the names we'd recorded to our our Poor Souls candle, which we lit each evening when we said our family rosary (another tradition we started in 2020).  It was a lovely and meaningful end to our Hallowtide, and one that we repeated again this year.


Which brings us to now, and the recent end of another Hallowtide.  How much my children have grown in these years!  How much I have grown! I am much different than the mother I was ten years ago, when I blindly followed the mainstream, doing things without knowing the reason for doing them.  I will forever be grateful for the blogs of 2014 (especially Catholic All Year ) that led me down this path, and for the many mothers out there who are also doing the same in their families.  It is primarily through their inspiration and example that I am learning how to live the faith with my children in my own home.
There once was a time when I worried that we were depriving our children of Halloween. Now, I believe that they have something even better. They have Hallowtide.