My Family's Connection to St. John the Baptist 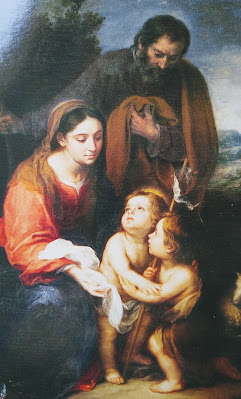 Our family has a lot to be thankful for this week.   We’ll be celebrating three birthdays (my parents’ and my husband, Tom’s) and “name day” for our son, John.   In thinking about that, I realized that I never really shared the story behind the connection our family has to St. John the Baptist, so I thought now would be a good time, since the Solemnity of the Nativity of St. John the Baptist is this Thursday, June 24.

It all started long before I was even remotely interested in liturgical living, and before I really knew any of the stories of the saints.  Tom and I were 3 years into our marriage, and he was preparing to join the Catholic Church.  As his confirmation date approached, he was contemplating whom he should choose as a patron saint.  Not being well versed in Catholicism myself, I suggested perhaps he simply choose St. Thomas since they share the same name, but Tom wasn’t a fan of that idea.  So, I suggested perhaps he choose St. John the Baptist since Tom’s birthday falls on the Solemnity of the Nativity of St. John the Baptist.   That appealed to Tom more, and he facetiously commented that he could relate to St. John the Baptist because he frequently “lost his head”, a somewhat snarky reference to our marital relationship.  So, St. John the Baptist became Tom’s patron saint, and as the years passed, Tom and I came to realize that, although chosen slightly in jest, this powerful saint would one day prove that the joke was on us.

Fast forward six years.  I was finally pregnant again after losing our first baby in miscarriage four years earlier.  We’d recently found out that we were expecting a boy, and Tom and I began discerning names for our son.  Another Tom?  Nope. Tom was adamant that we retire that family name.  Leo? Max? Justin? Joseph? Paul? James? None of the names I suggested seemed to work for Tom.  Then, I remembered Tom’s patron saint and asked, “What about John?”   Tom thought it over.  He liked the reference to his patron saint.  I liked the connection it had to Tom’s birthday and conversion to Catholicism.  I also wanted a name that reflected an infertility story from the Bible, and the story of Zechariah and Elizabeth seemed more than fitting. So, we settled on the name.  John it would be.   Little did we know that the name we had chosen would take on even more significance in the coming weeks.

Two months later, I awoke shortly after midnight and realized that my water had broken during the night. My heart sank. I was only 28 weeks along in my pregnancy with John.  After so many years of infertility and the loss of our first baby, I expected the worst. The day before, I had felt so strong and healthy and happy.  My parents had just arrived in town, and we were preparing to celebrate Tom’s birthday the next day.  Only now, instead of waking up to a day of celebration, Tom and I were waking up to our worst nightmare.  We were sure we were losing our John.

We rushed to the hospital in the wee hours of the morning on that June 24th, 2010.  We prayed a rosary on the 40-minute drive, and I tried to keep calm.  The following 24-hours were full of trepidation as we waited to see what my body would do next.  I was admitted to Labor & Delivery and hooked up to monitors and pumped with steroids and we waited. And we prayed.  We particularly prayed to St. John the Baptist because it was his feast day, hoping that he would intercede for us, and ask God for a miracle on our behalf, and to please protect our own little John.  And as we waited and prayed, Tom read to me the passages from the Bible that told the story of Zechariah and Elizabeth and the birth of John.  In those long hours, I felt great comfort come over me when meditating on the life and story of St. John the Baptist.  I felt confident that he was interceding for us.

A day later, we got our miracle. Instead of giving birth prematurely, as had been expected, my amniotic fluid began to build back up to normal levels.  Another week later, I was sent home, still pregnant, and on July 23, John was born.  He was healthy and bright-eyed and ready to take on the world.  His first word was “light”, and I am convinced God made him to bring light into dark corners of the world, much as John the Baptist did.

And for a long time, I thought that was the end of the story.

Time went by, and our family grew, and we held St. John the Baptist in high regard in our home. Every year since that June 24, 2010, our family made a point to celebrate not only Tom’s birthday, but also the feast of this great saint who was now the patron of both Tom and our little John and to whom we owed a great debt of gratitude.  However, I never suspected that St. John the Baptist wasn’t quite finished yet.

This time, it was August 2016, and we found ourselves in Houston, Texas, a thousand miles away from home.  We were again waiting for a baby, and again, things were not going as planned.  Our baby’s birthmother had just delivered a healthy baby boy, whom we planned to adopt, but she was in serious trouble.  Her vitals tanked soon after giving birth, she was unconscious and not responding, and the future of both her and her newborn baby were in limbo.  Without her written consent, we would not be able to adopt her child, and if she died (a real possibility at the time), with no other family around, he would become a ward of the state of Texas.  But more importantly, she was the mother of our future son, and we already considered her a part of our family and wanted her in our life and in our son’s life.  We prayed desperately for a miracle, asking God to save her and bring her back to us.

That long night turned into another long day, and she remained unresponsive.  Her baby was in the nursery, and I was not allowed to see or hold him without her consent. And because we had no proof of a relationship with her, we were not allowed to see her, either.  I was devastated, knowing the little baby we hoped to make our own was lying in the hospital nursery instead of a mother’s arms and his mother had nobody by her side as she fought for her life. Tom and I called our priest, our friends, our family asking for prayers for her and for our adoption situation.  And then I remembered that this wasn't the first time I'd been in a hospital, waiting to see if I was going to lose my baby, and I remembered that  there was one person who had helped us through it.  St. John the Baptist.  So, we turned to him again, and begged him for his intercession.  Please, St. John, do it again. Please, save this baby and his mother.

Hours passed.  Night came again, but I could not sleep. Then I heard a ping on my phone. It was a message sent by our birthmother. I was puzzled.  Someone must be using her phone, I thought.  So I messaged back, and she replied back, and said it was her and would I come see her?   I couldn’t believe it.  She was awake and responding!   Even more, she wanted to see me, and know that I had her baby in safe keeping.  My heart burst with joy and gratitude, and a few days later, she allowed us to adopt her baby boy.

And so, once again, we were given a miracle, but why do I attribute this miracle to the intercession of St. John the Baptist? It was a few days after we brought our sweet little Dominic home from the hospital that I realized that his birthmother had made her miraculous return to consciousness in the evening hours of August 29, the Memorial of the Passion of St. John the Baptist.  I was stunned.  How could I not have seen that coming?  Suddenly, everything made perfect sense.

I have heard it said that the saints are often calling to us, wanting to intercede for us, to help us in our most difficult trials.  I never quite understood that for a very long time.  There was a time when I struggled to remember the names of even a few saints, and I never really took asking for their intercession very seriously.  My journey through infertility changed a lot of that.  It changed because, for a time, I (mistakenly) believed that God wasn’t hearing my prayers. So, in desperation, I turned to the saints and asked them to pray for me.  Maybe God will hear them, I thought.

In hindsight, I think God allowed me to feel disconnected to Him in prayer so that I would turn towards the saints.  Perhaps he wanted me to realize that it wasn’t just me and Him, but rather, me, Him and a whole bunch of best friends in heaven whom I could call upon anytime for help.  The communion of saints, as the Church refers to it. I think God knows we need that kind of community both on earth and in heaven.

Since that time almost 20 years ago, when Tom and I first half-jokingly made St. John the Baptist a part of our family’s story, a lot has changed.  I have changed. My image of saints as distant figures in church history has now been replaced by a very real awareness of them standing beside me, calling out to me in little ways, hoping that I am listening.  Their names, their feast days, their stories, all pop in and out of the moments of my daily life, usually at times when I am wrestling with a particular challenge or anxiety that threatens my spiritual well-being.  But of all the saints who have come to my aid, it is through the intercession of St. John the Baptist that I have experienced the greatest miracles.  Without his help, I often wonder if I would have my two sons.  He is a most powerful saint, in so many ways.  A saint so great that the Catholic Church recognizes him as deserving of two feast days, and I am both honored and humbled that my family, thanks to his intercession, is connected to both.

St. John the Baptist, pray for us!

Note: If you would like to read more about my infertility story, John’s birth story or Dominic’s birth story, you can find them posted here, here, and here.