-1-
It was a good Mother's day around here last Sunday aside from the fact that our church really botched it up.   We had a visiting priest (something very common in a mission parish like ours...nobody seems to want to "claim" you) and the homily was all about "love your mothers", "call your mother", "mothers are modern saints", "we need mothers", etc. etc.

As usual, I was sitting in the last row of pews, trying to keep Joah in a semi-calm state, although in this case, having a 3-year old squirming in front of the congregation may have been a much needed distraction for some.  One of the perks to having an unruly pre-schooler and standing in the back is that it gives me a view of the entire parish.  During this homily that dripped with cliche's and sentimentality, I observed one woman fighting back tears, another woman shuffling back and forth through her missalette obviously trying not to listen, and the three ladies in front of me, none of whom were married, staring intently at the floor.   Several of the men didn't look too interested, either.  As if the homily hadn't been enough, at the end of Mass, the priest asked all the ladies who were "not mothers" to sit down while the "mothers" were asked to remain standing.   At this point, I saw the lady who had barely kept it together during the homily start weeping and the three in front of me sat down, again looking at the floor.   I didn't know the lady who was weeping, but I did know that the three ladies in front of me who sat down are here working as volunteers with this wonderful organization and spend their days helping teach and mentor the impoverished children in our community.   To know they voluntarily devoted every day to this cause and yet not be recognized as "mothers" was more than I could take.  So,  I bent over, Joah in my arms, and whispered to the three in front of me "please stand...you are mothers too".   They smiled gratefully and hesitantly stood back up.   When the flowers were brought my way, instead of taking my one, I took five.  And I bet you know what I did with them.

My heart bled for those women because I was once one of them and even though I may be an "obvious mother" now, I feel closer to those women than most women who have children.   Before I had a child of my own, I mentored other small children in scouts.  Before I held a baby in my arms for all to see, I buried one that few ever knew about.  But most of all, I would be lost without the elderly woman who has spiritually adopted me and become my spiritual mother..a woman who never carried a child in her womb.  It is to her, not my biological mother, to whom I turn when I need prayers or want to share some joy or sorrow that I've experienced. So if anyone reading this has helped a child, prayed for a child, buried a child, or become another's spiritual mother, thank you.  You and women like you deserve dozens of roses.


-2-
On the home front, though, I got everything I wanted for Mother's Day, namely, I didn't have to cook or do dishes, and I had some quality time alone.  Sounds terrible, I know, to want to spend part of Mother's Day alone and away from the kiddos, but I felt no guilt.  After all, they get me the other 364 days of the year.   Tom understood and after feeding me lots of BBQ chicken (my request) he graciously loaded up the boys and said "we'll be back at bedtime" and off they went in search of trains, hardware stores, playgrounds and French fries.   I took advantage of the quality time to listen to some old LPs (something difficult to do when you have pre-schoolers enchanted by the turntable) and unpacked some more boxes since I had been itching to get some books on our still empty bookshelves.  Needless to say, the boys had a delightful time "rearranging" all the books when they got home!  But I'd rather have a bookcase filled with mismatched and leaning books than a room full of diaper boxes filled with books so it was still all good in my book.


-3-
In other news, if you read the update on our house that I posted a few weeks ago, you know that the first contract on our house fell through, no fault of ours.   Well, this week, we got another offer and the house is under contract again.   This feels so much like the up, down, up, down rollercoaster of infertility.   Selling the house will be an answered prayer but knowing it means we go back to square one if we want to adopt still gives me a lump in my throat when I think about it.   I don't like accepting God's will when the odds are I won't get the answer I want.   But what else is new...

In an attempt to get more involved in our new community plus keep the boys occupied, I signed them up for "Wee Ball" and they played their first game this week.  I never played sports as a kid and I know nothing about Little League, but I have learned that "Wee Ball" comes before "Tee Ball" and then Little League comes after that.  At least, I think that's how it goes?  Kinda like Daisy's before Brownies in Girl Scouts, maybe?   Anyhow, Wee Ball is for 3 and 4 year olds and watching them was hilarious!   The phrase "herding cats" comes to mind.

After the first "inning" it became apparent that Tom and I probably should have gone over a few things with the boys first...like which end of the bat to hold, what a "base" is, heck, what a "baseball" is!   But near the end of the last inning, they started to catch on.   John made a run for the ball and got dog-piled and started to cry but shook it off.   Joah finally agreed to hold the skinny end of the bat and made it to second base.   But mostly, they just enjoyed the fact that the ball field was one huge sandbox!


-5-
Now that we are mostly settled into our house, we have turned our focus outward and are starting to tackle taming this jungle that is called the Appalachian forest.   Tom has declared war on the poison ivy that is creeping closer and closer to the front door and I have started our new garden spot.   I kept telling myself I wouldn't garden this year because I didn't want the added stress of trying to get a garden in on top of all the other stress that came with moving.  But I wasn't really fooling anybody, including myself.   I have a bit of a gardening obsession, which I come by naturally, since I grew up in the garden helping my father with his.   So, we have a few things out, albeit late, but considering we live in a temperate rainforest now that gets an average of 50 inches of rain per year as opposed to the 40 inches of rain per year we had in Missouri, I don't think getting a late start on setting out our 'maters, peppers, broccoli, and herbs will set us back much.     The hungry deer, however, are another story... 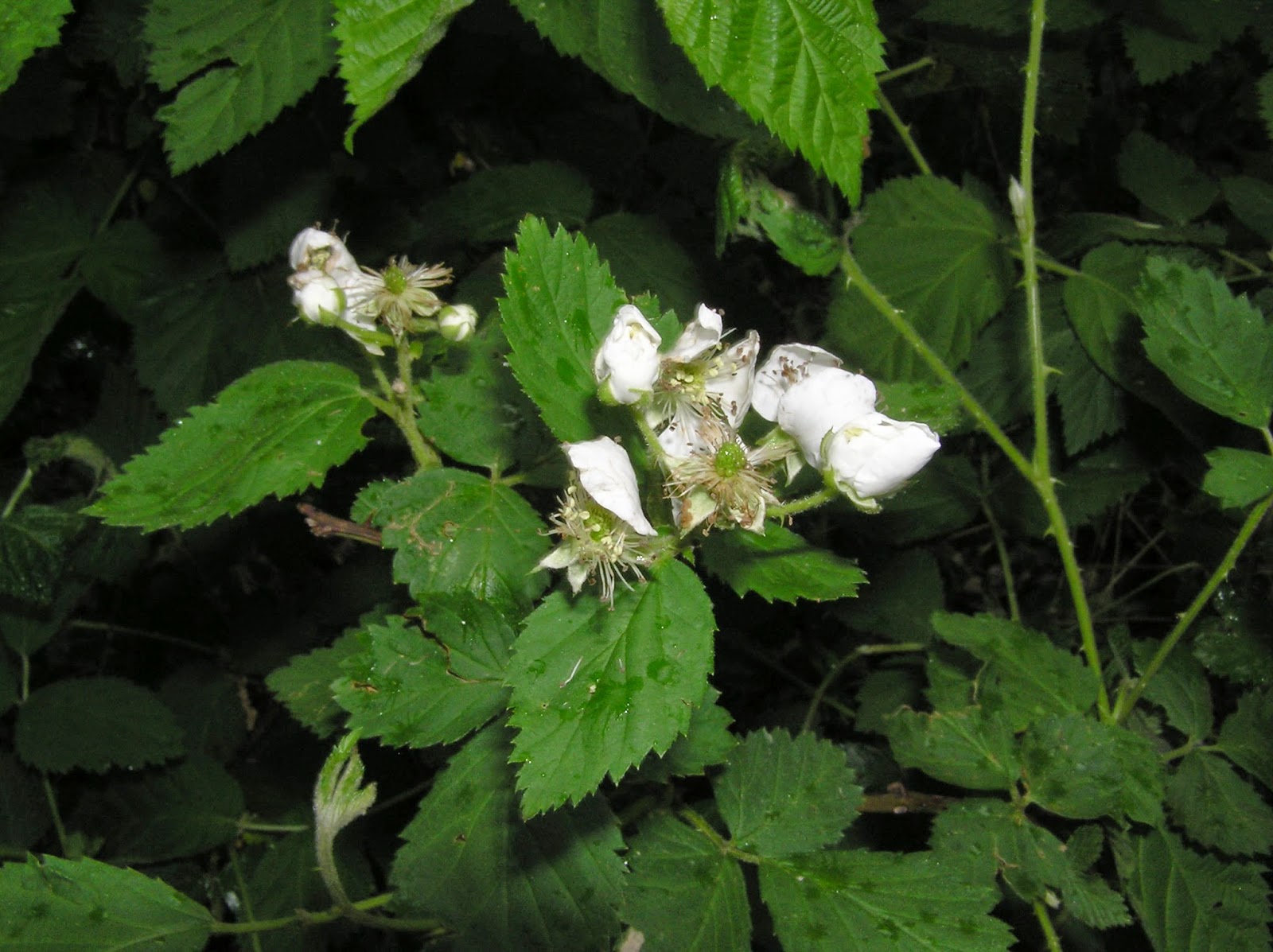 This past week was hot and humid here, a harbinger of the next few months, but this weekend, we are enjoying unseasonably cool and wet weather, which is not surprising considering the blackberries are blooming now.   Hence, it's Blackberry Winter in these parts.
After this, it gets warm and stays warm. And speaking of blackberries, it looks like we'll have a bumper crop this year.   Blackberry pickin' is a big deal in the mountains, especially considering folk here can sell them for $10 a gallon or more, which in turn, generates some much needed revenue to be used in the purchase of firecrackers for the 4th of July.  Who knew the ripening of blackberries could be so timely!


-7-
And sticking with the nature theme, I'll close with a story about visitor we had last week (no, not a bear yet).  Tom and I have been enjoying sleeping with the windows open and one night, just as we drifted into dreamland, we awoke to hysterical screeching and agonizing screaming that can only be described as a young woman under violent attack.   The urge to call 9-1-1 was hard to resist.   We listened to it get louder and louder and move from one end of our property to the other.   But rather than jumping out of bed and dashing for the floodlights, Tom and I just smiled and said "how cool".   We had just been visited by a red fox and if you've never heard one, go here now because I promise you, doing so just may save you from having a near heart attack some time if you ever go camping in the eastern woods of North America.  Enjoy!

Have a great weekend and thanks to Jen for hosting.
Posted by Lynda at 3:21 PM