They Turn To Gold Before They Die: Seeing Death Through Autumn’s Lens

Below is my latest post for Peanut Butter & Grace.
I hope you have a very blessed Thanksgiving!
Please remember to say a prayer for all those
experiencing loss or misfortune during this time of year.

“Mom, why are all the leaves turning gold?”

It was the end of October and my five-year old son and I were walking down our driveway, gathering an array of red, orange, and mostly yellow leaves. My son gently placed each leaf in a basket. We would later press the leaves between newspapers until they were dry, and then tape the leaves to our windows, in an attempt to bring autumn indoors.  {Read more...}
Posted by Lynda at 2:55 PM 1 comment: Links to this post 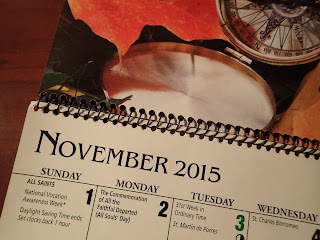 It's been three years now since we decided to add another child to our family through domestic infant adoption. We are still waiting for that child.

This month, we will face another Thanksgiving Day, three years after the Thanksgiving Day when we announced to our family that we would be adopting again.  How excited they were!  Now, I can't remember the last time any of them have said anything to us about our adoption journey.  It's just me and my husband and two precious little boys waiting now;  it feels like everyone else has forgotten and moved on.

Three years ago, I was still what people like to call "of child-bearing age". Having a child at my age then was uncommon, but certainly not unheard of. Adoption agencies still accepted couples of our age.  Three years later now, many adoption agencies won't.  We are considered too old and are beyond the age when most people have children.  Having a baby now, even an adopted one, for many people, would just be considered strange.

Three years ago, I wanted to have a child who would be close in age to his or her brothers. I imagined them going to high school and college together.  Playing on sports teams together, sharing the same hobbies together. Now, they will be five years apart, maybe more, and those dreams are gone.

A year ago this month, I was frantically trying to gather the necessary documents to complete another home study. I felt the clock was ticking and I couldn't get the paperwork done fast enough.  After two years of waiting, I had convinced myself that the child we were meant to adopt would be coming to us just as soon as we could get the paperwork in order.  After all, we'd already been waiting to adopt again for two years, right?  God wouldn't make us wait much longer, right?

But just to be sure, in case God wasn't quite paying attention to our prayers, we decided to pay an adoption consulting firm to help us out.  And not just any adoption consulting firm, but one that had a reputation of placing babies within just a few months, sometimes weeks, of being home-study approved. They had great reviews, and other adoptive couples raved about how quickly they were matched.  We became excited and we sent in our check with the reassurance that we would likely be matched soon. Our wait would end before our third year was up.  We were sure of it.

But soon after, we were living the cliche'.  What seemed too good to be true really was, and there is always a catch. Although our consultant sent birthmother situations to us almost weekly, not once did we offer to show our profile. Baby after baby went to other waiting couples because we didn't want to let go of what we had come to believe adoption should be.  We lost one chance after another at having the baby we dreamed of because we stood on principle and did not want to (quite literally) buy into the system that had been created.

Meanwhile, during this past year, our agency placed five babies.  Four of those babies were placed by birthmothers who wouldn't consider an adoptive family that had other children.  Only one birthmother even considered us, and she chose another family.  At the moment, our agency has approximately ten couples waiting for a baby.  Our odds are not good.

So here we are, three years and another home study update later.  Another October and November spent gathering documents, scheduling fingerprinting, requesting background checks, asking for references, completing physicals. We are doing the paperwork again, sending in our fees again, and waiting again. How much longer, only God knows.  The desire for another adopted child in our family is as strong as ever, even though the dream has changed.

It's hard to be excited about completing an adoption home study when it's the fourth time you've done so and you know that each year, your chances of being chosen get lower.  There will be no fanfare when we complete our home study update this month.  We will simply put it in a manila envelope and send it off, with another prayer.   God still sees us.  In that, I believe.

Were we living in another time, a time when babies available for domestic adoption were not a commodity in a supply-and-demand system, things would be different.  But these are the times we live in; this is the world we've created for ourselves.  A world where most of the babies who could be adopted instead go to heaven, and to be blessed with even one on earth is a miracle.

Posted by Lynda at 3:34 PM 4 comments: Links to this post

Email ThisBlogThis!Share to TwitterShare to FacebookShare to Pinterest
Labels: adoption

Linking up with Kelly over at her blog and playing a little catch up with this Quick Takes...again.  Thought I'd just share some of the randomness of our past few weeks.   No drama, just life. 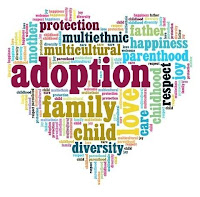 November is National Adoption Month!  Last year, I wrote a post about promoting adoption and you can find it here.  I am encouraged to see that more and more positive stories are being shared about adoption.  Just this past week, our state elected a new governor and he is the father of nine, including four adopted children. His story alone has reached thousands of people in our state. Let's hope more families that have been blessed by adoption will continue to show the beauty behind this loving decision.


--2--
Speaking of which, we are still waiting to be matched with a birthmother. Waiting, waiting, waiting.  It seems to be what I do best. We have nearly completed the paperwork to update our home study.  Again.  For the fourth time. It's very depressing, and seeing another year go by has been incredibly heartbreaking.  But, quitting has never been my specialty, so onward we go. Maybe this will be our year. Or maybe not.  I'm trying to be okay with either outcome, and I find some consolation in knowing that our loss each year has been another waiting family's joy.  In some ways, I hope that the waiting will someday be a testament to our adopted child of just how much we loved him or her before they even existed. That would certainly make all of this heartache worth it.


--3--
We had a beautiful autumn here, one of the prettiest that I can remember.  I also seem to recall saying that same thing last year!  A friend and I were walking today and reflecting on how unique it is to live in the middle of thousands of acres of wilderness.  Our little town and community is just a postage stamp in a sea of green, although this past month, it has been a sea of gold, as the oaks and hickories, poplars and maples turned to shades of yellow. 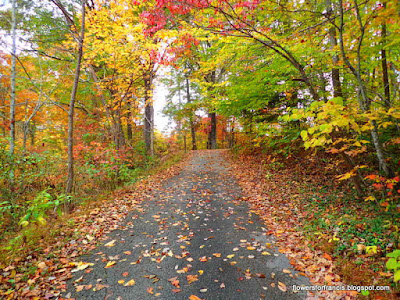 --4--
It was this sea of gold that my son noticed a few days ago, when he asked me "Mom, why aren't the trees green anymore?" I thought about it for a second and replied, "because the leaves are all dying."   It struck me at that moment, how, during this month that the church encourages us to remember and pray for the dead, God joins in and paints our landscape with death.  And yet, He makes it so breathtakingly beautiful in the process.  Surely, there is a lesson there for us. 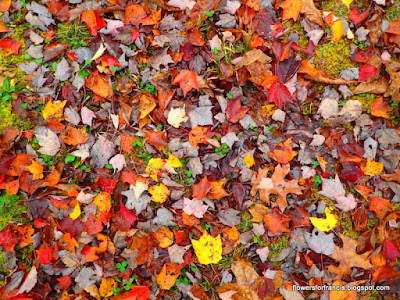 --5--
We are back into the "Candy Season" now, which lasts pretty much until Lent, it seems, and John couldn't be happier.  He and his brother decided to be a pirate and his cat for Halloween, and they came back from trick-or-treating with a pirate's bounty! 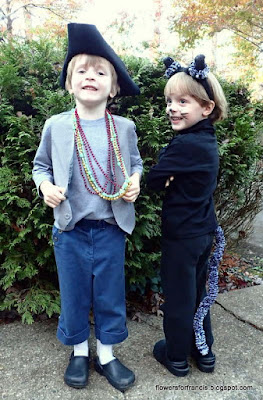 --6--
For All Saint's Day, the boys were St. Joseph and St. John Bosco.   St. John Bosco was originally going to be St. Damien of Molokai, but when it came time to paint the leprosy on Joah's face, he would have nothing of it (imagine that!). Suggesting to him that I paint "boo boos" all over his face and hands was probably not my smartest parenting move.  John chose St. Joseph and was particularly tender with his Baby Jesus.  He wants a new baby brother or sister so badly, and it pulled my heartstrings seeing him be so affectionate with his little doll baby. 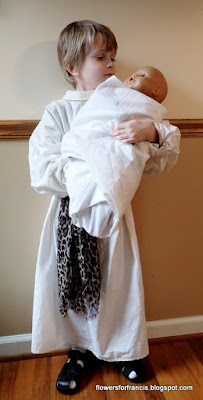 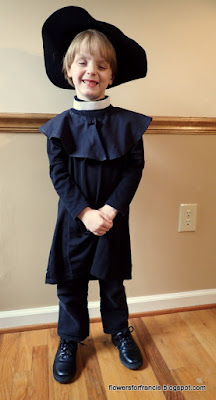 --7--
Lastly, we are remembering our own little family of saints this month.  Our three babies plus my grandparents are all buried on our family property, so for us, a visit to a cemetery each day this week in order to gain a plenary or partial indulgence has been pretty simple.  My children have grown up with these graves in their daily life, and I hope that in some way, it helps them see death as something not to be ignored, feared, or trivialized, but rather, a connection to the ones we love on the other side.  They need look no further than our own front yard to be reminded of their eternal destination.


Have a great weekend and thank you, Kelly, for hosting another Quick Takes!


Posted by Lynda at 9:01 PM No comments: Links to this post

Venus, Mars, and So Many Stars: What God’s Creation Teaches My Children


Most mornings, just before sunrise, my two young boys have made a habit of crawling into bed with me after they hear their daddy leave for work.  One of each side of me, they call it their “cuddle time” and I admit, it is my favorite part of our day.  One chilly morning last September was no different.  However, that morning, instead of flopping over onto his belly as usual and falling back to sleep, my five-year old sat straight up, looked out the bedroom window, and asked, “Why is that star so bright?” His younger brother, never one to be left out, immediately responded by also sitting bolt upright in the bed, and I began to realize that my good night’s sleep was over.  Slowly opening my eyes, I squinted out our east-facing window and sure enough, there was something very bright shining through the maple leaves, high above the horizon.   I groggily sat up and clumsily reached for my glasses.  It was certainly something celestial, and it was certainly something we’d never before noticed outside our bedroom window. {Read more...}

Posted by Lynda at 2:44 PM 2 comments: Links to this post