He Saw Only Light 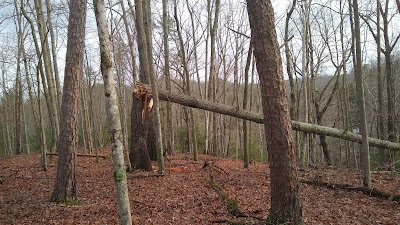 The memes that floated around the internet a week ago announcing the pending uncertainty that came with having a time change, a full moon and a Friday the 13th all in the same week, now seem to have been hauntingly prophetic. For all that transpired this week, pandemic pandemonia, an unprecedented plunge of the stock market, and for me personally, an EF-1 tornado that struck our property Thursday night, how convenient it would be if we could only blame it all on the moon or some other superstitious aligning of mystical occurrences beyond our control.

“God saved us”, my son said Friday morning when we surveyed the damage surrounding our home. Timber snapped and uprooted only a hundred yards from our house made me think of the twenty-inch diameter red maple standing just outside Dominic’s bedroom.  It could have been that tree, I thought, and it would have landed squarely on top of his crib while he slept.  But it didn’t, and for reasons either totally random or completely unrandom, depending upon your faith perspective, our roof and the red maple outside his window were spared, and so was he.  I like to think that his guardian angel held the tree up while the mantle of the Blessed Mother shielded our home from the 100 mph winds that went just to our north.  After all, Dominic was baptized on the feast of the guardian angels, and his room is adorned with angels on every wall, and I certainly was praying many Hail Marys as I waited for the storm to pass. In that context, it makes sense that, as my son said, God saved us, or at least as much sense as blaming it on the full moon and Friday the 13th.

I did my usual Saturday morning grocery run today, and walked down aisles stripped of hamburger meat, mac n cheese, soda, cleaning products and of course, toilet paper.  My two oldest, both 9 now, pushed their own cart this time, filling it with food to put in our local blessing box.  They are using the money they make by selling eggs from their chickens to pay for the groceries.  I was so proud of these two boys, walking like little men, thinking about what kind of food people would like most, and trying to do the math in their little notebook so as to not go over budget.  While I had been thinking of people’s greed and need to hoard, my two boys were thinking about people’s need and what they could give.  Just a few years ago, I never would have predicted this kind of behavior from my boys, nor from society.

We’re keeping our Lenten calendar up-to-date as best we can, with one of the kids marking off each day as it comes.  Today is day 16 of Lent, yet it feels like it has been much longer, thanks to the events of this past week. I have struggled with staying focused on the liturgical season when surrounded by such intense drama.  Even if I abstain from media outlets, the anxiety builds when world events hit so close to home.  Last Sunday morning, my husband and I had to explain spiritual communion to our sons, when we told them we would no longer be able to receive the Eucharist on the tongue.  Joah began sobbing at the thought of not being able to receive the Blessed Sacrament, as if he’d been told that his beloved dog had gone missing.  How difficult it felt to ride out the storm when our view of Jesus walking on the water was being so obscured by pragmatic directives.

Years ago, when I worked as a wildland firefighter, there would be times when I served on a fire crew for weeks at a time.  Working in often remote locations, subject to smoke and grit and dust and physical fatigue, combined with an element of risk that was always there on the fire line, members of the fire crew would gradually begin to show their true colors.  It never started that way, of course.  Coming together as a crew, we’d present our best selves at first, well-rested, fed, showered, motivated.  The first week would be filled with camaraderie, the second, would be similar.  But somewhere around day 16, things would begin to turn, and in-fighting, grumbling, anxiety and competition would begin to emerge. I recall one instance when a particular crew member decided to self-isolate and refused to eat, sleep, or communicate beyond necessity with the rest of us.  It was her coping mechanism as she waited for our 21-day fire detail to come to an end and she could go back home to her safe space.  And come to an end it did, and she along with the rest of us, returned back to our homes with matching paychecks that indicated matching experiences, but it had been far from that.

"Perspective is everything", the wise financial advisers are telling us now as we wait to see if the next Great Recession begins.  Perspective is everything, every time.  I need to remember that on this day 16 of Lent, as the effort of two weeks of presenting my best self begins to leave me feeling spiritually exhausted and desiring to self-isolate.

Last night, we ended the day by lighting Joah’s baptismal candle and renewing our baptismal promises with him, as he celebrated the anniversary of his baptism.  I remember that day 9 years ago so well, how he screamed the entire time, how the priest, annoyed by my baby’s incessant crying, quipped that we should “take our cry-baby home”.  I remember the covered statues in the church that day, because it was Lent, and how people in the parish questioned us for having a baptism during the Lenten season.  It just didn’t seem appropriate, they thought.  They had lost their perspective.

Last night, that child who screamed through his baptism, and who sobbed last Sunday because he couldn’t receive the Eucharist, and who picked out groceries for the hungry this morning with pure joy in his heart, that child beamed as he watched the flame flicker on his baptismal candle.  As dark as his world is sometimes, at that moment, he saw only light. 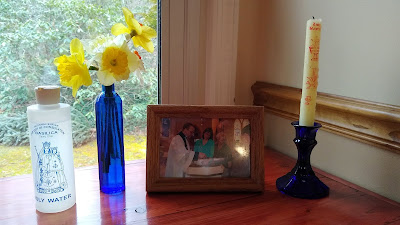