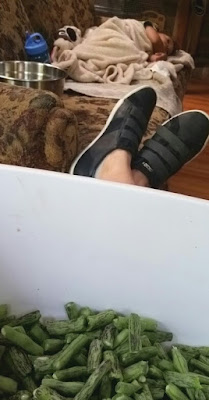 The thunder rumbled in the distance and the sky looked ominous as heavy, dark clouds rolled in from the west.  The early morning sun tried to push against the clouds, creating a purple haze that blanketed the trees.  I walked slowly, enjoying it all.  Unlike my son, who has an unhealthy phobia when it comes to storms, I have always found approaching thunderstorms to be invigorating and energizing, and on this early morning this past week, that was exactly what I needed.

I was walking to our mailbox to mail a card, a distance of about a thousand feet, and I relished every step.  It was the furthest from the house I’d been all week, and the furthest I’d go on that day. Because I knew that, I was determined to make the most of my fifteen minutes of freedom.


As I walked, the wind picked up and I dodged green walnuts as they fell from the trees above me.  The song of the wood thrushes accelerated as they too, became excited by the approaching storm. Soon, the other birds followed the thrushes’ lead and joined in.  They’re all starting their second nests now, trying to squeeze in as much reproduction as possible during their four-month breeding season. In about six more weeks, shorter days and northerly winds will turn their minds towards migration. But for now, raising a family is their only focus.


I wasn’t supposed to be home this week.  Mid-July through mid-August was the time that I had expected to be abdicating my domestic duties and instead, having adventures in the forest.  My plan had been to be working under contract conducting bat surveys while my husband held down the fort.  With no meals to cook, laundry to wash, clingy and overly-emotional children to deal with, and most of all, no longer being sequestered in my home, this time working was going to be the closest thing to an escape that I’d have all year.  A time to be who I once was, and not who I am now.

But, alas, in late June, I was informed by my employer that the company did not get the contracts it’d been hoping for and so, there would be no work available for me this summer.  My heart sank at the thought of an entire summer spent doing the same things I do all year. I gave into self-pity, thinking back on the days when I'd had a job that I loved and all the freedom that came with it.  With a government vehicle at my disposal, once upon a time, I could take off and head anywhere into the forest that I wanted most days of the week, doing biological field surveys and monitoring, and enjoying the change of seasons and what they brought.  Amphibian and bird surveys in the spring, bat surveys in the summer, botanical surveys, cave surveys, controlled burning, stream work, wetland delineations, habitat improvement projects…I loved it all.

But I loved my children more, and after 20 years in a job I loved, I walked away.  I walked away because I couldn’t stand the thought of doing a job I loved while other people cared for my kids…the kids that I’d prayed so fervently for and had waited so long for.  I couldn’t stand the thought of dropping them off with a sitter when they were running a fever just because I had a meeting that day that I couldn’t get out of. But most of all, I walked away because I could, because I knew that I had a choice, and I wanted to make the best choice for my family, even if it wasn't the easiest choice.  Having tried the working parent role for two years, I was beginning to realize that even though I had the best of intentions, my family was still getting the leftovers of my time and energy while my career got the best part of me.  Financially, I knew we'd have to tighten our belts, meaning we'd have to re-locate and make lifestyle changes and put a lot of trust in God's providence. But the hardest part was knowing I'd be losing a freedom that I'd come to love so much. It was not an easy choice but once it was made, the peace that came after was almost immediate.

That was seven years ago now, and with the exception of this past week, I rarely look back. But, when the offer came a year ago to go back to work during the summers, the carrot was more than I could resist, so I worked two weeks last summer and hoped for more this year. It felt good, and healthy for me mentally, to be back in my old line of work, and after a few days of it, I found that my home life was becoming less and less consuming in my thoughts. How easy, I realized, it would be to go back to work and forget that I am a mother for at least forty hours per week.

Perhaps a little too easy.

I flipped the flag up on the mailbox and turned back towards my house.  The thunder vibrated the earth now, and the wood thrushes had stopped singing.  My skin began to tingle as I stepped through our grassy field, and I became wary of rogue lightning seeking the tallest object in the open space. As I crossed back into the treeline, I looked through the windows of my home and saw my family.  I saw my sick baby laying on the sofa as my older children and husband prepared to leave for day camp.  They’d be gone all morning and I’d be left behind with the baby, who’d been hit with a violent stomach bug three days before and had just turned the corner that night.  I prayed that today, he’d finally be able to keep food down and that the fever would break, and that perhaps, he’d let me get a little further from his side because I had green beans to can and a cake to make and laundry piling up.

I smelled the rain in the air and a few seconds later, felt the first drops on my forehead. I picked up my pace, my heart beating a little quicker, as the outflow of the storm blew my hair away from my face.  Refreshed and ready to face my day, I stepped up onto the front porch just as the sky came crashing down.