Whatever That May Be 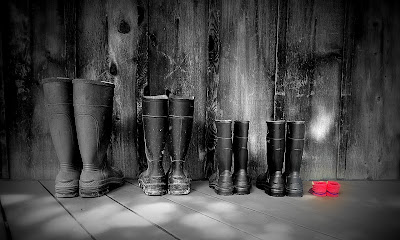 It was not long after our youngest son was born that we knew we wanted to try to have another child, which for us, meant trying to adopt again. Suffering through another miscarriage one year later only made us that more certain. I suppose some would say that we should have been satisfied with what we had, and simply quit trying to add more children to our family. After all, we were in our early forties and had already spent ten years trying to have children. After so many years of trying and failing, finding ourselves with two sons in the span of seven months felt a lot like winning the lottery. Hoping for just "one more" not only seemed completely unlikely, but almost greedy.

Still, the desire to add another child to our family sat heavy on my heart. No matter how I tried to rationalize it away (we're too old, it costs too much, so many other couples are waiting, our children already have a sibling, we already have more than we can barely handle, etc. etc.), the desire would not go away. All I can say is that there was a pulling that kept tugging at my heart, and as much as I tried to bury it, ignore it, rationalize, or pray it away, it always came back. So, each year for the past four years, we completed our adoption home study and waited. I waited for either the child to come or the tugging to go away.

This year of waiting, however, has felt much different than the previous three. Last December, when we submitted our home study update again, I knew this year would be the last. Not because I was certain we would be chosen to adopt this year, but because the tugging was gradually beginning to diminish. Although in my heart of hearts, I still wanted to parent another child, after three years of waiting to be chosen for an adoption situation (and another miscarriage), the knowledge that it may not happen had really begun to sink in. The number of times we'd been rejected by birthmothers was something we lost track of somewhere around ten or twelve. Rejection was beginning to feel like a normal part of our life now, and we came to expect it each time we presented our family profile to a birthmother looking to choose a family. Although every "she chose another family" message still left a sting, I'd cried my last tears over it at least a year ago. I had no tears left.

In addition, our sons were growing up and we were beginning to enjoy this new chapter of our family life. All the baby stuff has been packed away for a couple of years now, and in its place are overalls, ball caps, hiking boots, and baseball gloves. Our oldest turns six next week, and his brother is not far behind. Looking ahead, I saw my time with my children being measured not by feeding intervals and diaper changes but instead, by teaching them things like how to fish, ride a bike, swim in the deep-end, and read books that don't have pictures.

In truth, submitting our paperwork in January and agreeing with my husband that this would be our final update, our final year of trying, was liberating. Peace began to settle in my heart where the empty place of wanting another child had been. Just knowing that we didn't have to keep riding the rollercoaster of expectation followed by disappointment was consoling. It's been a fifteen year ride and finally, finally, I am ready to get off.

So when June rolled around, and I knew we only had six more months left of waiting to be chosen for an adoption, two thoughts crossed my mind. The first thought was that if, by some miracle, we did get chosen for an adoption this year, then our child is already in this world now. Somewhere. The other thought was that, if for some reason, we did not get chosen, then the agony of the waiting game was already half over now, and the pain would not last much longer. Needless to say, it was the latter thought that seemed much more realistic.

This is not to say that we have given up. Far from that. Every night still, we gather our boys for nightly prayer and every night, we pray, "Please help us and all couples struggling to have children and waiting to adopt." It is not only our prayer, it has become our mantra. We continued to use social media to try to spread the word of our desire to adopt, although in this past year, our facebook page saw very little traffic. We would bring it up in conversation with our family and our friends, and a handful of them are encouraging, but in most cases, we simply get no comment. I'm sure that to most, our desire to adopt again after so much time has passed appears as our own little fantasy world.

And such was the response two weeks ago, when we began telling others that yes, it is true, we really are going to adopt again. We are matched with a birthmother and if all goes as planned, we will be holding the child that we have been waiting for before the summer ends. At this point, we have no good reason not to be optimistic. And nobody is more surprised than we are.

So, while this wonderful news has been met with judgment by some and denial by others, I can see only mercy. Mercy shown upon me and my family by our loving God who has walked this adoption and infertility journey with us, and who has placed these things on my heart, and who I know will lead us to His desired end, whatever that may be.