Saving the Strawberries (My Take on the Church Scandal)

We're all reading the news about the latest scandal in the church. Like many, I'm very disturbed about it all. However, I remain optimistic that better days are ahead for our church. I need only to look at my children and the many faithful Catholic bloggers and young adults that I know to believe that. If you are interested in doing something in reparation for the sins within our church, check out Kendra Tierney's blog at Catholic All Year.  I will be joining her and many others in small penitential acts and prayer that will hopefully bear beautiful fruit.  Mary, Queen of Heaven, pray for us. 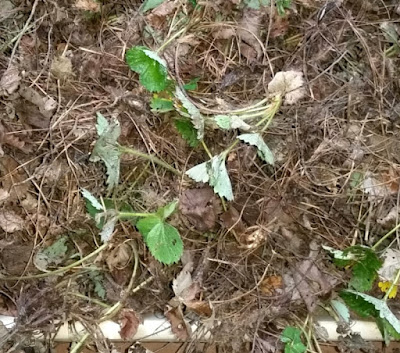 I stared at the grass growing tall in the raised bed in the corner of my garden and tried to find the motivation to start over.  Three years ago, this same raised bed had produced plump, juicy, red strawberries that my sons would squabble over as they picked their way through the leaves to find the biggest one. But that was three years ago, and now, as I stood staring at it, this bed of strawberries looked only like a patch of weeds, and I had no one to blame but myself.

It’d happened so slowly and so effortlessly. The first summer, I’d allowed the weeds to move into the edges of the bed, and told myself that the strawberries would be fine, that there were only a few weeds and still plenty of strawberry plants mixed among them. The second summer, I’d allowed a few more weeds to move into the spaces between the strawberry plants, and as a result, my harvest began to decline. Now, well into the third summer, I had no strawberry plants left to be seen, and my last harvest had reaped only a handful of fruit.  With feelings of guilt and regret, I now stared at the strawberry bed, and saw it as a lost cause. Was it worth saving? Could I ever bring it back to what it once was?

I took a deep breath and pushed my spading fork into the soil of the bed, lifting the compacted soil with all my might, as the weeds struggled to hold it together despite my effort. As I lifted the great clod of dirt, I turned it upside down, then gave it a hefty thump with the back of the fork. The dirt clod broke apart and the weeds separated.  I reached down, pulled the weeds by their stems, and shook off the remaining dirt, then tossed them into a pile, where they would wither and die in the sun.

The heat of that August morning was already bearing down on me, and as I pried each hardened clump of weeds up by their roots, I began to rapidly lose enthusiasm.  Better to just give up on growing strawberries, I told myself.  I could just buy them from the local strawberry farm nearby and let someone else do this work for me. Or, I could just cover the raised bed with black plastic and kill everything at once, and then start over again next spring.  Surely there is nothing worth saving still alive in this raised bed, I thought. My mind raced with rationalizations in an attempt to avoid the hot and dirty task at hand.  And as my mind wandered, in the corner of my eye, I caught sight of a strawberry plant, brown and dry, nearly hidden under the dirt where a weed clod had been.  I gingerly pulled the strawberry plant out, shook the dirt off it, and scraped its rhizome root with my fingernail.  It was struggling, but it was alive.

With renewed vigor, I plunged my spading fork back into the sod and pulled up again, turned over another clump of weeds, and found yet another dry and brown strawberry plant hidden beneath.  I separated the strawberry from the weeds and repeated the process over and over.  The sweat ran down my brow and my arms began to ache, but I did not care.  My focus now was on one thing.  I would save the remaining strawberries.

As I finished turning over the last clod of dirt, my curious son ran up to me and observed as I gently placed the old, dry strawberry plants in a tray of water.  “What are you going to do with these?”, he asked. I explained to him that those were our strawberry plants.  “These?”, he exclaimed.  “But these strawberry plants are dead,” he said, as he turned one over in his hands.  I stopped working and showed him how to scrape the rhizome with his fingernail, exposing the white flesh underneath the brown skin. “See?” I said, “It’s alive.”   He still looked puzzled.  “But not very much alive,” he said.  I thought for a moment, then smiled and said, “Yes, but it is alive and that’s all that really matters.  Sometimes, it only takes a spark of life to start things growing again.”   Finished with turning over the dirt in the strawberry bed, my son and I walked back to the house, carrying the salvaged plants with us, my son chattering about how he couldn’t wait for us to grow strawberries again.

The same week that I tackled my long neglected strawberry bed, the news broke about the widespread and deep reaching scandal in the Catholic church in Pennsylvania.  I read the news stories and, like many others, was angered and disgusted by the level and degree of conceit, betrayal and cowardice that has been practiced by so many leaders of our church for most of my lifetime.  I found myself feeling thankful that my children are still young, and that I do not have to explain to them just yet the intricacies and sordid details that are making headlines today.  For now, my children are very proud to be Catholic and love their faith, and I want more than anything for that to never change. However, scandals like these are just the kind of thing that could jeopardize that.

And even though they are young now, and ignorant of such things, I know that in time, they will be confronted with the task of defending their faith from those who will choose to use these scandals to attack.  Just as the bad actors of the Crusades are still used as a means to attack the Catholic church 900 years later, these kinds of scandals will never be forgotten, and will provide fodder for those wishing to destroy the church and her faithful for generations to come.  It will not be easy for my children to defend a church marred by such ugliness, and I worry that they will have their own personal crisis of faith, just as I did many years ago.

Unfortunately, it seems to be a common trend these days, almost a right-of-passage, for those of us who are part of the post-Vatican II generation to struggle with our faith and our church once we reach adulthood. Unlike our parents or grandparents, we have had to grow up in a church filled with conflicting messages and dying traditions. As I came of age, I learned that the priest who baptized me left the priesthood to marry, the priest who gave me my First Holy Communion did the same, the parish priest who I admired for a decade during my formative adolescent years turned out to not be the man we thought he was and was caught in the 2002 scandals, and the charismatic priest who mentored me and so many other students during our college years left the priesthood a year after I graduated. By the time I’d reached the age of 23, I looked around at the church I’d grown up in and the priests I’d always known and saw no shepherd that I wanted to follow. And sadly, my story is not so uncommon among my generation. So, to read about scandals that happened during this same time period, while disheartening, is not surprising to me. The weeds have been growing for a long time.

But amongst the weeds, there are still strawberry plants.  There are the priests and bishops who love the church and show it by speaking the truth and reflecting it in the way they say mass, approach the sacraments, and encourage the faithful. They do not muddy the waters nor sit on the fence.  It was a priest like that who led me back from my own personal crisis of faith, simply by teaching the truths of the Catholic church and the meaning behind them, and demonstrating with his actions his great love for the priesthood.

I walked away from my garden that week carrying a tray full of strawberry plants that had been overtaken by weeds and deprived of the sunshine and rainfall and nutrients that they had needed to thrive. In short, they were slowly dying due to my neglect. Their potential to produce beautiful, sweet fruit had been diminished by my apathy and delay.  And looking at them, I realized that while strawberries may not have mattered so much to me, I’d robbed my children of one of their little joys in life i.e., picking and eating strawberries fresh from the garden while the juice dribbled down their chin.

In the end, I decided not to replant those old strawberries that I’d saved from the bed, though they still had life within them. Instead, I will plant them on the edge of the garden, where they may still bear fruit, but I will not depend on them.  For the most part, they have run their course.  Rather, after uprooting the weeds and removing as many of their roots as possible, I decided to replenish the soil of the bed and start with new, young plants.  It will be another year before they bear fruit, but with a renewed commitment to tending them, I am hopeful that my children will soon be looking again at a harvest of sweet berries rather than a patch of weeds.

It is a similar hope that I have for my children as they grow in faith. That, when confronted with a garden that appears to be overtaken by weeds, rather than giving up and walking away, they will search amongst those weeds for the strawberries and anything else worth saving. Perhaps they will remember that even if what once thrived now appears lifeless, that with a little care, it only takes a spark to get it growing again. I pray the same will happen during their lifetime within our church.