“Mom, can we have dandelions for dinner?”

I’m guessing this isn’t a phrase heard very often in most American homes, but when the cold, cloudy days of our Appalachian winters slowly begin to give way to sunny, blue skies and warm winds, my children and I start anxiously watching for that first herald of spring known to many but appreciated by few…the golden flowers of the dandelion.

I suppose the appearance of dandelions in the yard causes most Americans to groan. Other harbingers of spring such as seeing the first American robin, or perhaps the first daffodil in bloom, or maybe hearing snow geese as they fly overhead to their breeding grounds, are more likely to stir feelings of anticipation for the long summer days that we know lie ahead.  But a dandelion?  Regarded as a weed and despised by lawn care enthusiasts, the lowly dandelion has become for most of us merely a symbol of everything unwanted and unkempt, and is a plant considered worthy of no mercy nor appreciation.

But for children, a dandelion is a thing of beauty and in many ways, it is a plant made especially for them. Romping through the overgrown grass in early spring, my children love to pick dandelion flowers and turn them into delicate bouquets that they then take to our little statue of the Blessed Mother (and sometimes to their earthly mother). If the blooming of the dandelions happens to coincide with Easter Sunday, they know that a flower or two will most likely adorn our Easter cake and cupcakes, along with a few violets and henbit.  When the dandelion flowers go to seed, they, like most children, make a wish and blow the seeds into the wind, then run ahead of them and try to catch them on the breeze. And who doesn’t remember making dandelion jewelry as a child, wrapping the drooping stems of each flower around another flower and turning them into friendship bracelets or a tiara fit for a princess?

But of all the many uses my children can find for a dandelion, their favorite by far is turning them into a much-loved snack that replaces potato chips and French fries for a few weeks of the year.  When those first yellow blossoms appear, shining gold across the landscape, my children and I grab a basket and head out on a dandelion harvesting adventure.  We pick as many as we can find then bring them home, give them a good rinse, dip them in a cornmeal breading seasoned with salt and pepper, and fry them up in a bit of oil.  My children love to help with this and when we serve the fried dandelions for dinner, there is always a squabble regarding who got the most.

The old saying is that a weed is just a plant growing in the wrong place.  I suppose that is what has become of the humble dandelion.  Brought over from Europe by our earliest ancestors, the dandelion was once a valuable herb for both its medicinal and nutritional properties. Considered healthier than most vegetables, it is high in many vitamins and the entire plant is edible.  It has been used for thousands of years in nearly every culture on earth and even has roots (no pun intended!) in Catholic tradition.  For example, this bitter herb was traditionally used as a symbol of the Passion and is sometimes shown with other flowers in historical paintings of the Madonna and Child, or of the Crucifixion.

But perhaps nobody understood and appreciated the dandelion more than the great Catholic apologist, G.K. Chesterton, for whom the entire philosophy of life could best be defended by means of a dandelion. Known to defend every living thing on earth as a gift of our Creator, it was in the last pages of his Autobiography in which he wrote, “through what incarnations or prenatal purgatories I must have passed, to earn the reward of looking at a dandelion."

I do not know if Chesterton ever actually ate dandelions for dinner.  I like to think that he enjoyed them a time or two himself.  Having attempted to share my fondness for dandelions with friends, I have learned that it takes a certain amount of humility to eat a dandelion, and I think Chesterton would have appreciated that.

Nevertheless, I enjoy making dandelions for dinner for a lot of reasons. The fun of gathering and cooking them with my kids, the knowledge that I am feeding them something that is highly nutritious, and the fact that I can get as many as we need at no cost, are all what I consider benefits to eating this seasonal treat. But there is also one more reason why I love serving dandelions for dinner. I hope that by having dandelions for dinner, my children are learning what Chesterton tried to explain so eloquently.  That is, that even weeds have value, and that they too fit into God’s great design for Creation. As my children grow, I want them to try to see things more as God sees and not as man sees.  Today, it starts with how they see a plant that others consider unwanted.  A few years from now, it may be how they see a person whom others consider unwanted.  My hope is that someday they will realize that, as Chesterton wrote, “The only way to enjoy even a weed is to feel unworthy even of a weed." 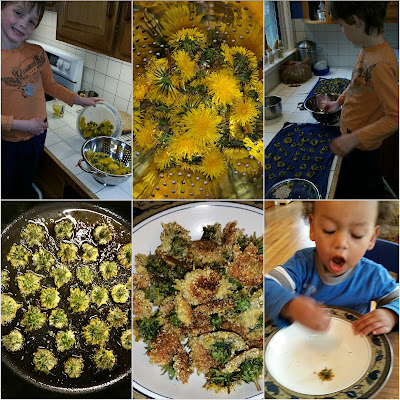