-1-
Seems like a lot of bloggers are in a bit of a funk these days, present company not excluded.  The week kind of started that way for us when Tom woke up on Saturday with a sore throat and fever.   He made a quick rebound but not before he missed a much-anticipated airshow that he'd hoped to attend with the boys. Then there was all the stress surrounding this decision, and now, it is already Friday again.  I really believe all this funkiness going around the blogosphere should at least in part be blamed on the full moon we had this past week.  It was gorgeous but also, powerful.  There's a reason the word "lunacy" is derived from the Latin word "luna" and means what it does.   At least, that's my excuse, and I'm sticking to it!


-2-
So, since this was one of those weeks in which I felt particularly susceptible to lunacy, I spent a considerable amount of time outside.   God gave us the natural world as an antidote to what often ails us mentally and I take full advantage of it often.   This past weekend, I helped with a Bat Blitz and put my biologist cap back on for a couple of nights to help conduct bat surveys.  Unfortunately, we caught very few bats, because, again, full moon.  The moon was so bright that the bats could see the mistnets we put up.  Poor planning on our part, yes, but still, we had fun.  One thing we did catch, however, was a flying squirrel.  They are the cutest little things but not much fun to remove from a mistnet if you value all your fingers.   I allowed my fellow biologist to do those honors since he A) had a pair of heavy leather gloves and B) was getting paid, unlike myself.   Actually, the only flying squirrels I have ever handled were the ones I used to sedate and remove from woodpecker cavities. But that is another story for another day.   Just trust me when I say the little critters have a LOT of attitude!

-3-
Actually, if I want to see bats, all I need to do is step out my front door and look up.   We have a Big Brown Bat (yes, that's its real name;  Eptesicus fuscus if you prefer the Latin version) roosting over our porch.   The boys love it and I would too if it didn't leave its calling card right in front of our welcome mat.  Still, it's pretty cool to have a pet bat.   He's been here since July and will probably hang around (pun intended) until mid October or so, at which point, he'll meet up with his friends and look for a warmer abode, which most likely, will be our neighbor's barn.   Then, come spring, he'll probably return to our porch.  I've known folks who have had bats return for years to the same location, and considering bats can live for 20 or 30 years, I guess I might as well get used to him.  Hopefully he will make himself useful by eating a few of the insects that congregate around our porch light at night and dive bomb me every time I try to open the front door.


-4-
So that was pretty much our weekend.  On Monday, we took some time to pick a few marigolds (Mary's gold) and place them at our statue of the blessed mother.  We sang happy birthday to her and said a Hail Mary before the 30-second attention span of our boys wore off.  Our poor statue of the blessed mother has had a rough life, as you can see in the photo.  She's been knocked over by deer, hit by falling limbs, covered with snow and ice, and moved 500 miles but she still stands there steady and strong, watching over us. 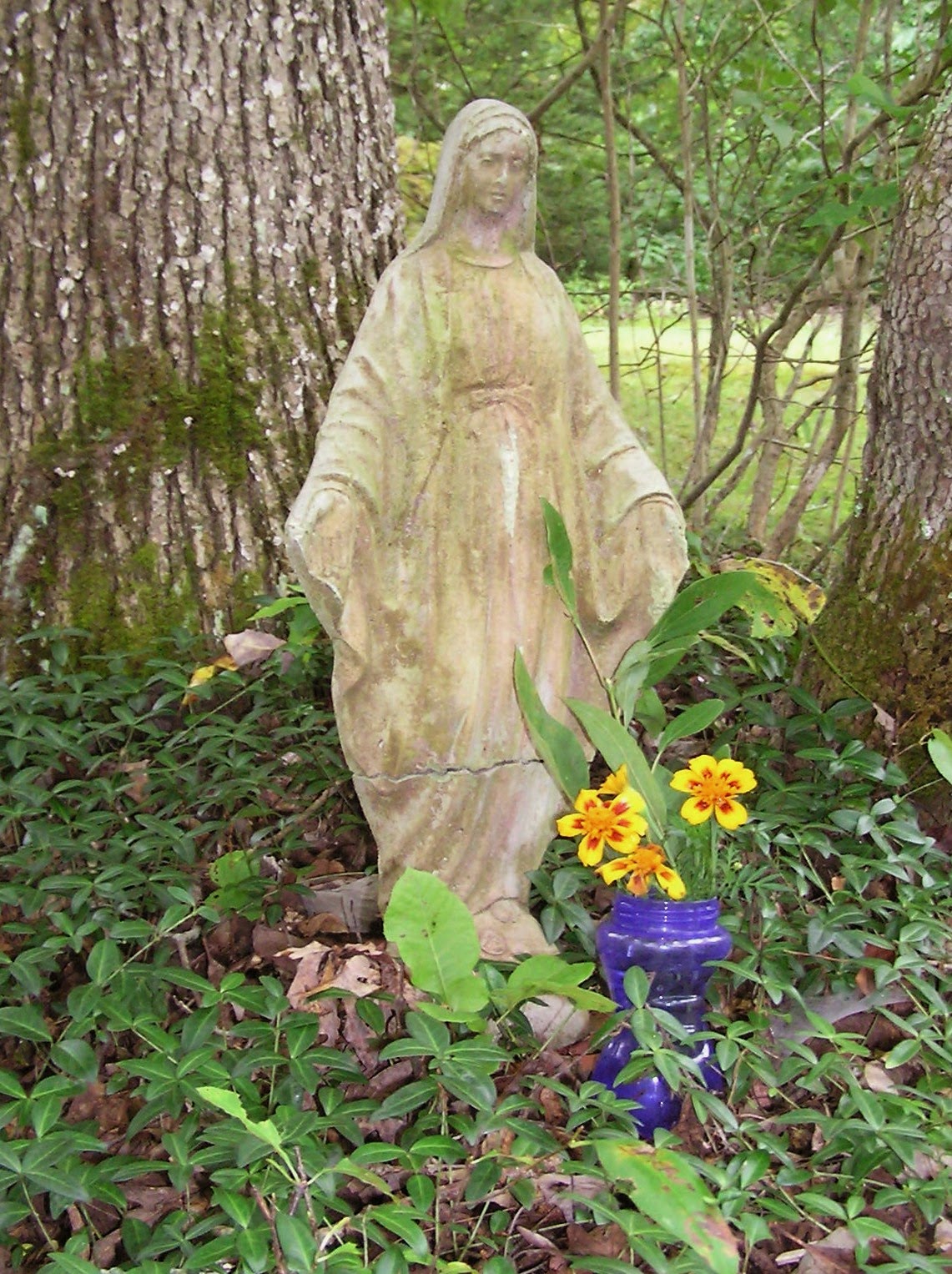 -5-
We've been getting a lot of rain here this past month, and I am again reminded of what it feels like to live in a temperate rainforest.  The foggy mornings and afternoon showers have created a damp forest filled with mushrooms of every shape, size and color.  We found these in our front yard this past week. I wish I knew what they are called and am adding "learn mushrooms" to my bucket list because I just am amazed by their diversity. 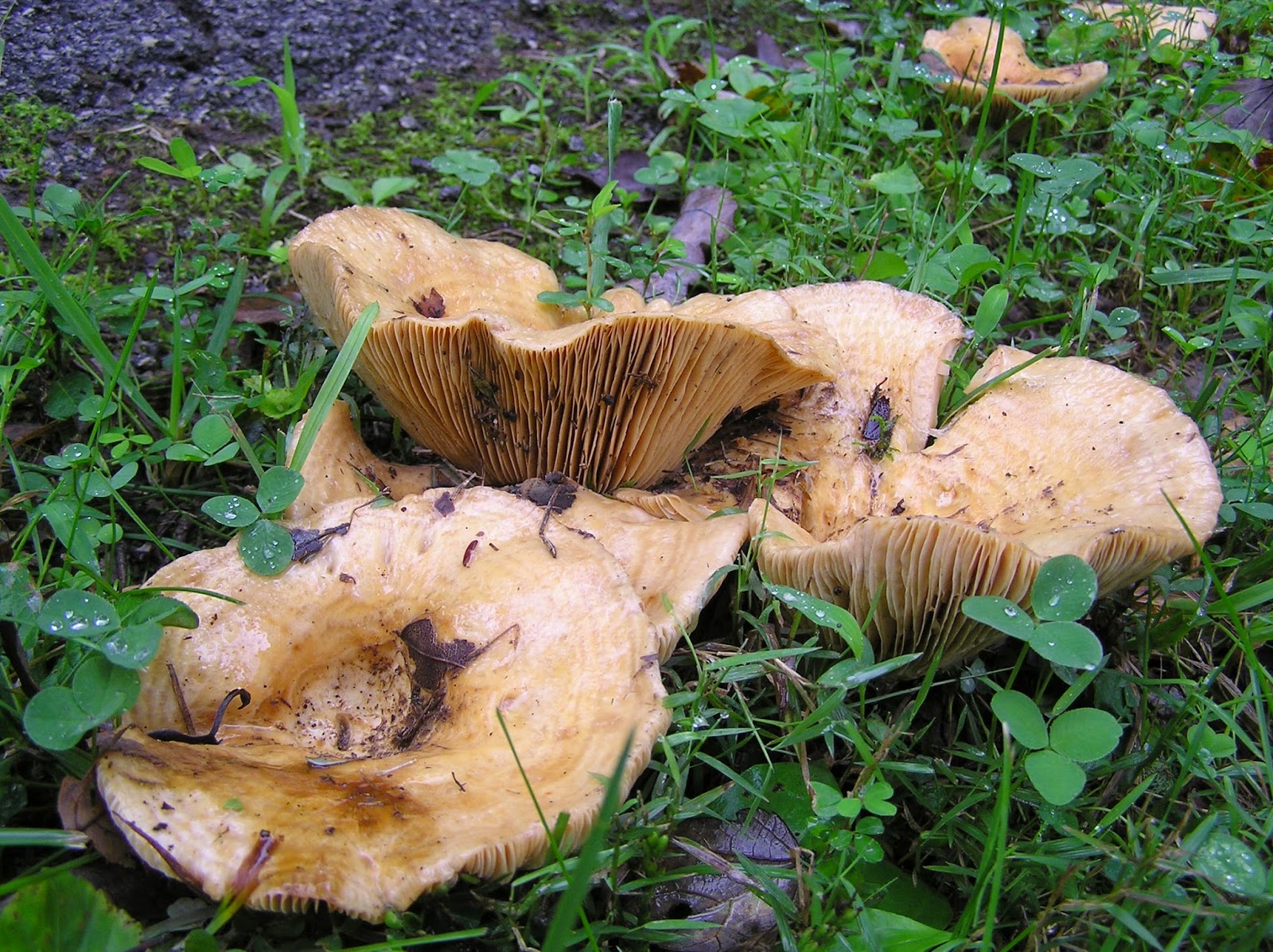 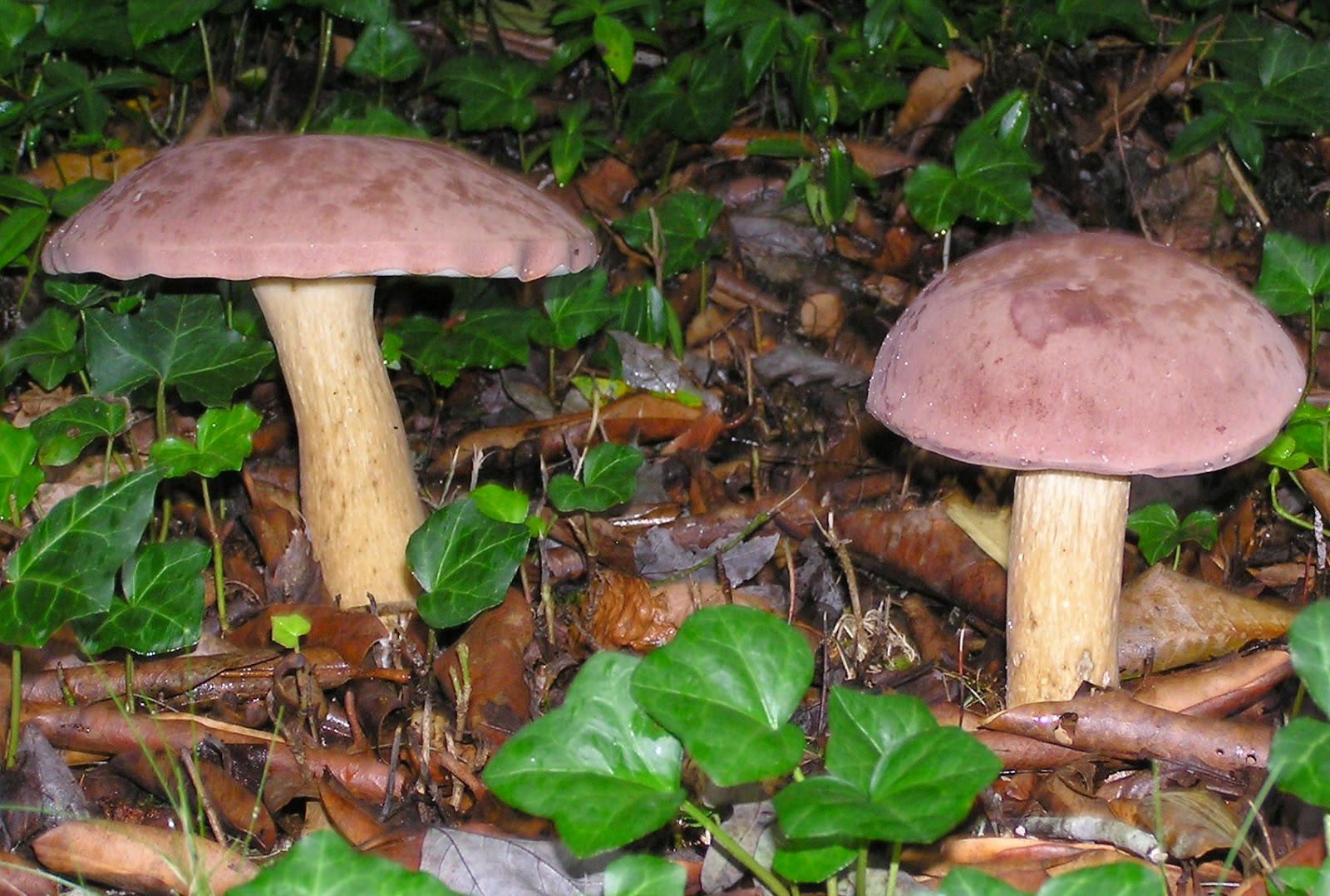 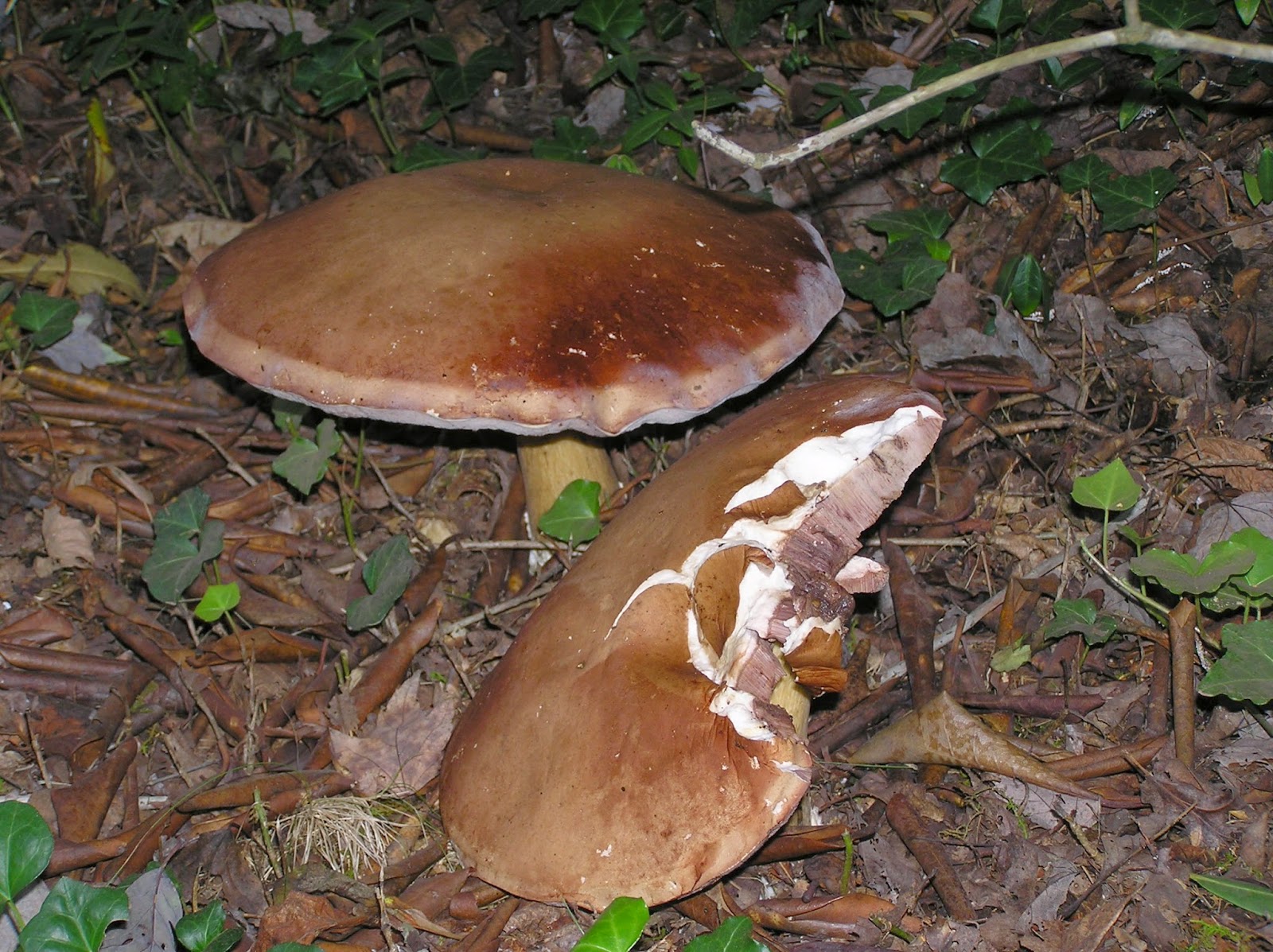 And where there are toadstools, there must be toads, right?  We found two, one of the yellow and one of the brown variety.


-6-
Now is also when all of the late summer wildflowers are blooming in our meadow and putting on quite a show. 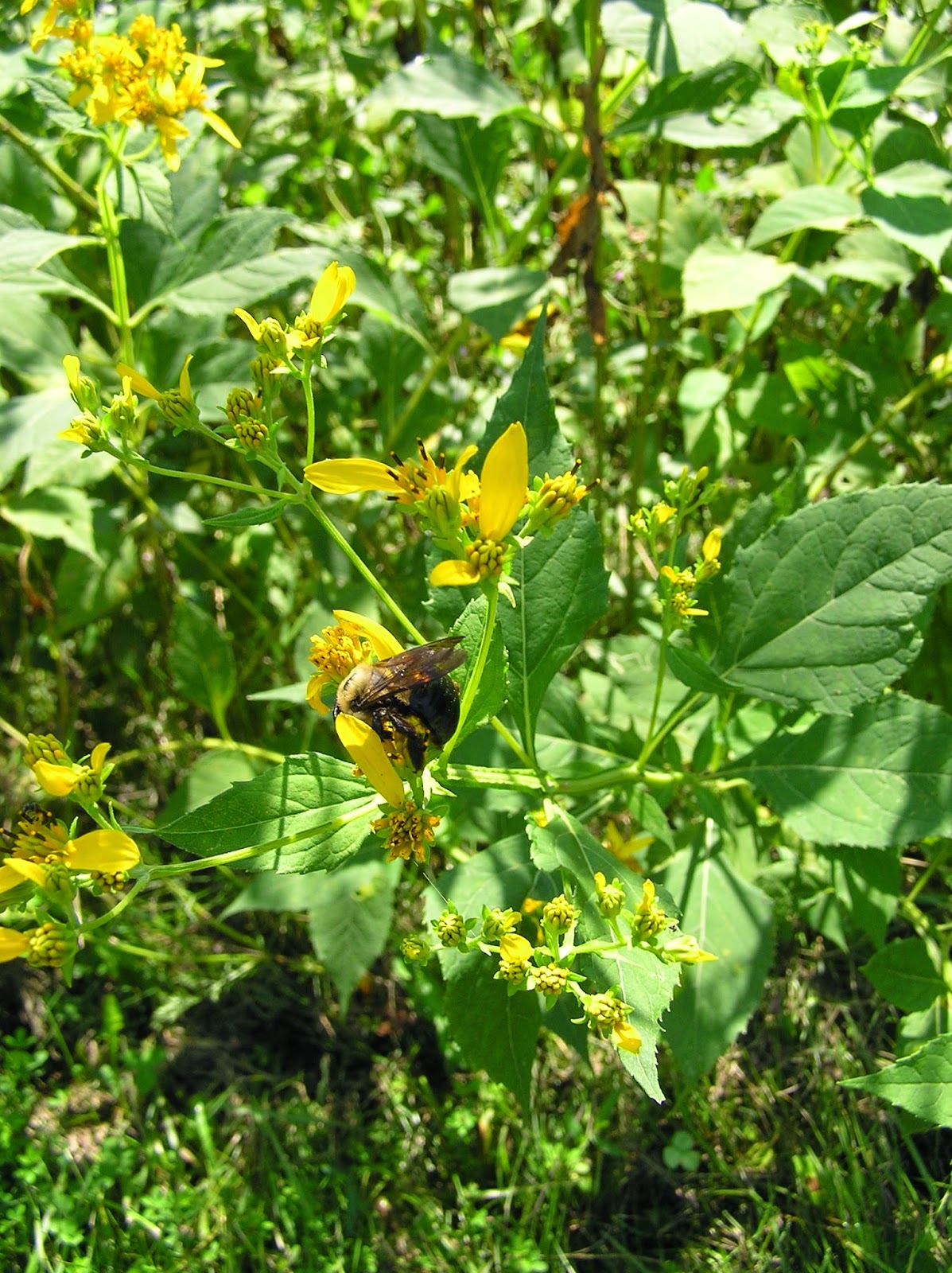 There are about a million kinds of asters so, unlike "learn mushrooms", "learn asters" will never make it onto my bucket list.  However, I do appreciate their delicate structure and beauty.

The walnut trees are dropping their leaves, making them one of the first species of trees in the south to do so, and adding to the yellow hues along our lane.  I have particularly enjoyed running in the mornings amid their falling gold leaves, although the occasional gray squirrel chucking a walnut at me as I pass under him does keep me from getting too lost in the moment! 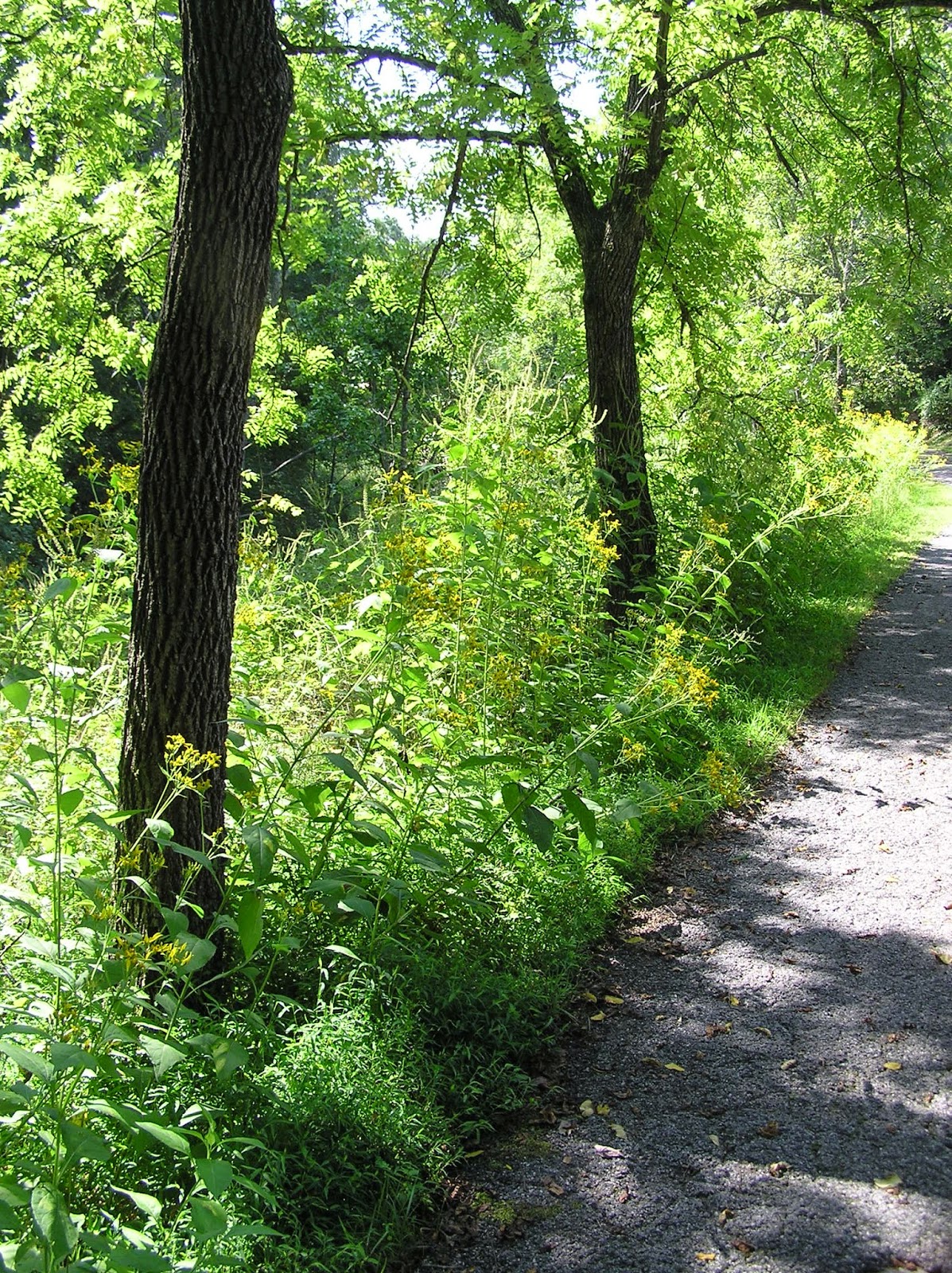 And who could overlook the bright fuscia of the fruit of the big leaf magnolia tree and the strawberry bush!  In the mountains, strawberry bush also goes by the name "hearts a-bustin' with love".  Well named, don't you think?

-7-
With all signs now pointing toward autumn, the cool weather we are expecting this weekend will only add to the anticipation.   If any of you go by the woolly worm forecast, and are not quite ready for another winter like last year, you'll be happy to know that the woolly worm that the boys and I found this past week indicated that we are in for a mild winter.   You heard it here first folks!  The woolly worm is as good a predictor as anything I know, although I haven't yet checked the persimmon seeds to see if they are forecasting the same. 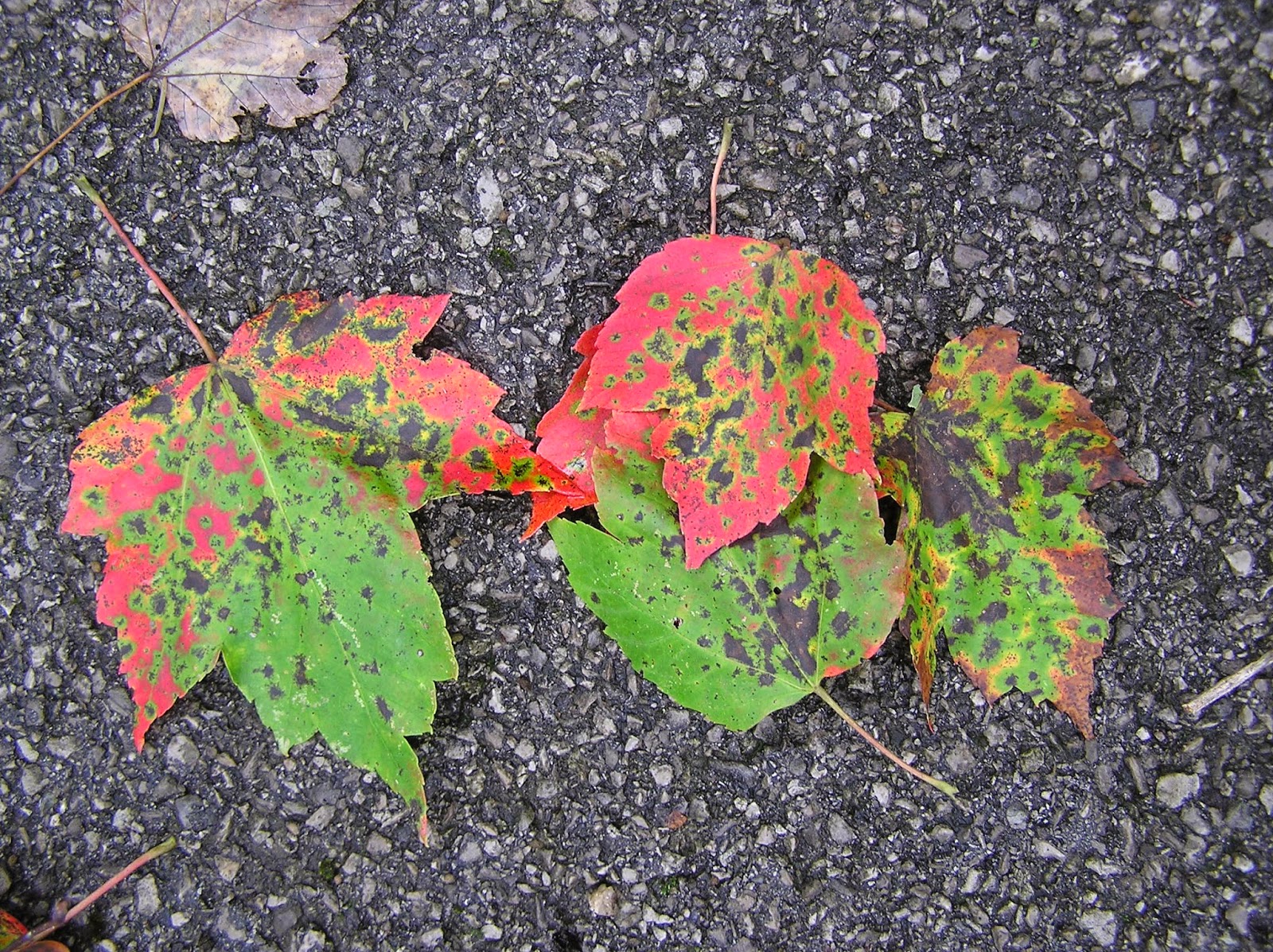 All of this is just to say that, if like me, you've been in a bit of a funk lately, I hope you take some time to get outside soon and enjoy the creation that God gave us during what is a season of beautiful transition. Just a small corner of His world is bigger and more complex than all of ours and taking the time to notice it is one of the best cures for lunacy I know.


Have a great weekend and thanks to Jen for hosting this Quick Takes!

Email ThisBlogThis!Share to TwitterShare to FacebookShare to Pinterest
Labels: nature