The Hard Freeze Ahead

I cut down all the zinnias yesterday.   Before that, I gathered their seeds and they are stored away in the garden shed where, hopefully, they will not become a winter feast for hungry mice. I’ve never had mice eat my stored zinnia seeds, but then again, maybe I’ve never had desperate mice in my garden shed. Given a winter long enough and cold enough, I suspect mice would eat any kind of seed that they could find rather than choose starvation.

The zinnias were ready to be cut down, although a few were still putting forth their last ditch effort at blooming. For the late-migrating monarch and buckeye butterflies, these random flowers with their lingering bits of nectar are a merciful bonus provided to them by an almost completely diminished summer. This weekend, the temperatures will drop to near-freezing, and our first heavy frost will singe the petals of these last remaining flowers.  The butterflies will be put on warning and will, most likely, respond by moving further south. Those that refuse to heed this warning will be allowed to survive for a few weeks longer, until the first hard freeze kills all the remaining belligerent blossoms. There will be no mercy for the butterflies then.

With that first frost this weekend will also come the opening day of our first deer (gun) season, and the zinnias had to go because they were growing in my line of sight.  Before Monday arrives, the deer trail that comes out of the woods and that winds its way along my zinnias will, with any luck, serve up meat for our family. The timing of the colder weather, should we harvest a deer, could not be better.  The time lost to the butterflies will be appreciated by many hunters this weekend.

As I sit quietly this weekend, watching the deer trail and waiting, the time will pass slowly, and my mind will wander.  As they have all week, I suspect my thoughts will turn again and again towards two dear friends, both of whom are fighting illnesses complicated by pneumonia, and both of whom have situations that look grave.  I visited one of them yesterday, a dear ninety-six year-old woman, and when I walked into her hospital room, I found her awake and alert and clutching her rosary.  I stroked her head and she kept saying that she wanted to go home.  She was unable to eat; each bit of food and even liquids threatened her life by causing her to aspirate.  She begged for a glass of water but we could not give it to her.  Her doctor explained to her that she needed a feeding tube, and she started to weep.  She turned to her friend who was standing across from me and asked, “What should I do?” and her friend’s response was, “I don’t know.  I don’t think so.”

The other friend, who lies in a hospital ICU located hundreds of miles from my home, was diagnosed with cancer twelve years ago and has been living, as he will tell you, on borrowed time ever since.  In those twelve years, he has had good days and bad days and days when it looked like his time may be up. But each time it looked like his time was up, he rebounded, and his summertime continued.  However, a week ago, he took a turn for the worse, and his situation continues to be precarious.  He is a fallen-away Catholic with a saint of a wife. Friends and family have rallied around her at this time, but only some of them understand what is truly at stake.  But she knows. She knows that the first frost is behind him, and the hard freeze is next, and that even for zinnias and butterflies, hungry mice and unsuspecting deer, all mercy, at some point, comes to an end. 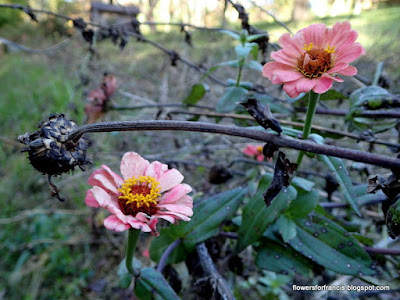