Gardening and the Gift of Work 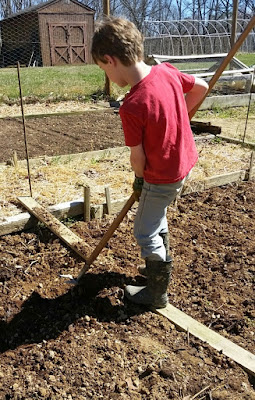 Our garden is in, or at least most of it.  We still have sweet potatoes to plant, but those go in last, once all chance of chilly weather has passed.  But other than that, everything has been planted, and that is no small feat.

Not many people raise gardens these days, I’ve noticed.  Sure, a few people set out a tomato plant or two, and some may even have a raised bed with some lettuce and onions, which is great.  Few things are more rewarding than growing your own food, even if it is just in a small bed or pot.  But to really garden, to grow food across a large area of land, to produce enough to eat fresh plus put into storage for the coming months or years, is a pretty big undertaking, and certainly less common now than it used to be.  I have a lot of theories about why that is the case.  Fresh foods now are more readily available in groceries and at farmers’ markets, people eat out more, most people don’t have time to process their own food, many yards aren't suited to gardens, and many more are in subdivisions where gardens aren't allowed.  All are very valid reasons not to grow a garden. But for me, being able to raise a garden and provide the freshest, healthiest foods for my family has always been important.  When my husband and I bought our first house, the deal clincher was that the house had a great garden spot that came with it.  Kitchens and bathrooms can be remodeled, I thought, but a relatively level ridgetop spot with full sun and clay-loam soil cannot so easily be created.


This past week, we planted corn.  My father, who turns 80 this summer, and I, share a large garden spot, and so when it was time to plant corn, he joined me and my son, Joah.  The sun was hot, and I worried a bit about him over-exerting himself, but he knew and I knew that it was time to plant, and that if we were to get it into the ground before the rain came the next day, we had to do it then.  I lined up the string for the corn rows, and my son grabbed the furrow hoe.  He insisted on making all the furrows himself, and I apprehensively agreed while my father watched.  The first row was a bit too wavy, and a part of me wanted to straighten it out for him, but before I could say anything, my father spoke up, “Great job, Joah.  Now, let’s make another one,” and before I knew it, the two of them were planting corn together.  “Now, Joah,” my father said, “planting corn is a spiritual exercise as much as it is a physical one.”  I smiled.  I’d heard this story every year as a child when I planted corn with my father in his garden.  He’d always insisted that if you weren’t right with the Lord, any corn you planted would not come up.  Manys the time when I was a small girl that my father would ask me to drop the corn seed into the ground rather than doing it himself, and now that I am grown, I fully understand why.  On this day, he and I were letting Joah do the same, for as we all know, children are closer to God than we adults, and my father and I didn't want to take any unnecessary chances.  Joah dropped each seed into the furrow patiently and deliberately, then followed up by using his furrow hoe to cover each row with soil.  My father said proudly, “Out of my ten grandchildren, I’m glad I have at least one who likes to garden.”


I thought about that for a minute.  Of all the people in our extended family, it is only Joah who seems to take an interest in gardening.  My other son, my nieces and nephews, and even most of the other adults in the family, all head in the opposite direction when they see me heading for the garden, especially on a hot, humid day such as the one we were having on this particular day.  But not Joah.  Whether it is hoeing corn or digging potatoes, stacking firewood, or spreading mulch, Joah is ready to pitch in. The bigger the job, the more he is up for the challenge, and there is one very simple reason for that.  Joah is not afraid to sweat. This is not to imply that the rest of the family does not occasionally work hard.  They do, and they have the achievements to show for it.  But I also believe that most of us are not like Joah. Most of us make a point of avoiding hard work unless it is absolutely necessary whereas Joah just seems to take pleasure in working hard. At a young age, he has discovered that their is true joy in being a worker.

When my father was Joah's age, all the families in this community raised gardens.  They had to in order to survive. As a result, their lives revolved around the seasons and the harvest and they found pleasure in providing for themselves. Today, this same community has some of the highest unemployment rates in the nation and is plagued by an epidemic of obesity, depression and drug use. They left gardening and hard work in general way behind at least a generation ago, and sold off the homeplaces with the prime garden spots in order to pay for an easier life. While in my father's generation, people took great pride in caring and providing for themselves, and making a "hard earned buck", today, the attitude seems to be that if you work hard, you are a fool.  Of course, the latter mindset is a fallacy, and no wonder those who believe it are often plagued by physical health issues and mental stress. If only they realized that the ability to work is a gift from God.


This past week, the day that we put the last of the seed into the garden, was also the Feast of St. Joseph the Worker.  It’s a lesser known feast day for St. Joseph, as the big one occurs on March 19, which many Catholics, including my family, celebrate with cream puffs and sweet treats.  However, this year, on May 1, I thought it appropriate that my family was celebrating the Feast of St. Joseph the Worker by doing nothing more than tiresome, hot, sweaty, unnecessary manual labor.  We worked, we sweated, and we did it for no reward beyond the knowledge that we were blessed to be able to do it, and we were led by a little boy and an old man who both know that hard work is the secret to a rewarding life.