A Tale of Two Statues

Nobody said anything, but I could tell that most of them didn’t really like the idea.

I could tell by the silence and the lack of enthusiasm.

It had been suggested at a church meeting by one of our church’s elderly parishioners that we place a statue of the Blessed Mother in the newly acquired parking lot across from the church.  There was already a raised bed built of natural stone in the corner of the lot, and she thought it would be the perfect spot to establish a small grotto.  A few smirked, most said nothing, and the suggestion was ignored.

Months went by and weeds overtook the stone bed in the corner.  Eventually, another member of the parish suggested that a “blessing box” be placed in the corner of the lot, directly on top of the stone bed, a suggestion that was met with enthusiastic support.  Within just a few days, the blessing box was in place, standing atop the would-be grotto.  The church parishioners took turns filling it with non-perishable food items for the local citizens in-need, who came to it within hours, usually leaving it empty again.

More time went by.  But then one Sunday, another parishioner made an announcement.  She and her husband had been given a lovely, vintage marble shrine of the Blessed Mother by their former parish, which no longer had a place for it, and she and her husband wanted to place it in the lot across from the church.  There was apprehension.  There was hesitancy.  But after this parishioner agreed to not only donate the shrine, but to also do all the labor and pay for all the expense of establishing it in the vacant lot across from the church, the church leaders agreed to allow it, and so she and her husband went to work.

There were doubts.  Some, including myself, wondered how long a public statue of Our Blessed Mother would last.  We live in a wonderful small town, but Protestantism is strong here, and there are certainly a lot of misconceptions about Catholics and idolatry.  I feared that any statue of Our Lady would be vandalized, or be used by non-Catholics in the community as justification for their mistaken belief that Catholics “worship Mary”, as they so often like to say.  Still, I thought about how we, as Catholics, are called to evangelize not just by doing good works (such as the blessing box), but also, and perhaps more so, by publicly expressing our faith.  And so, on a hot Saturday in July, my family joined the husband and wife, and we helped pull weeds and put up new fence and cleaned up the old lot to make ready for the little Marian shrine.

On August 15 of last year, the Solemnity of the Assumption of the Most Blessed Virgin Mary, our priest blessed it. It was a lovely little shrine.  Following our priest, my children and others from the parish proceeded to the shrine from the church, singing Ave Maria and carrying silken lilies. That same day, my husband and I renewed our children’s consecration to the Blessed Mother in front of it.  Later, other members of my parish mentioned to me privately that they enjoyed stopping and saying a “Hail Mary” in front of it each time they took food to the blessing box.  It was beautiful, and I smiled at myself as I thought about how Our Lady has a way of coming to us no matter how many obstacles we put in her way. 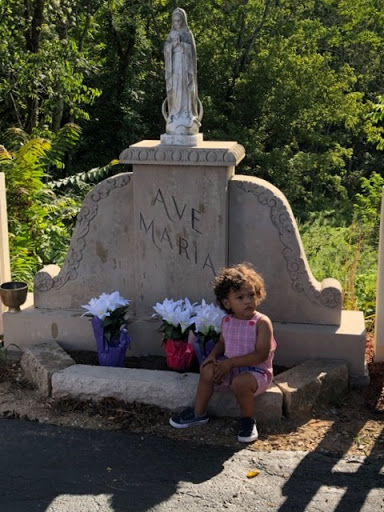 But then she was gone.

It had happened in the middle of the night, about a month later, and was caught on security cameras.  Three young adults approached the statue at around 3:00 a.m., toppled it off its pedestal, and carried it off into the night.   As soon as my family heard the news, my kids began to cry.  Who would do such a thing, they asked?  How could they?  More concerning was what would happen to her?  Would she be used in some occult practice somewhere?  Or sold in a pawn shop?  Or simply smashed into little pieces and reduced to sediment in an act of demonic contempt?

Feeling somewhat distraught, I reminded my children and myself that the statue had been blessed and consecrated and that it really belonged now to God, not us, and that if we trusted in him, something good would come out of the situation.  Then, we said a rosary, offering it for those who had stolen the statue and praying for its safe return.

It took a few weeks, but eventually, local law enforcement was able to use the video from the surveillance camera and track down the thieves.  And then, late one night, just as it had been stolen, the statue was returned, unharmed, by a sheriff’s deputy.

She was back, but by now, the monetary value of the statue had been made public, and there was a real concern that placing it back in the shrine would elicit another theft.  So, it was decided that instead of returning the high-value vintage statue to the shrine, another, less valuable statue would be put in its place.  The elderly parishioner, the one who had first suggested building the shrine two years earlier, eagerly offered to donate her family’s own Blessed Mother statue to replace the original, and so it was done, and almost a year later, it is still standing there, representing all that is good. 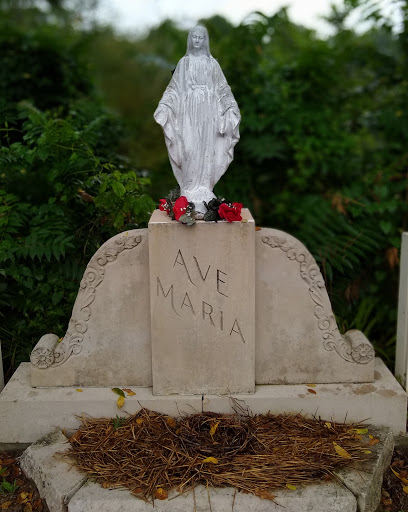 We had hoped that today, one year from the day that the first statue was blessed, that our priest would bless this second statue that took its place.  We had planned to bring our family to mass, then we would process to the shrine and place roses at her feet and re-new the consecration of our children to our Blessed Virgin Mary, as we do every year on this day. However, it is not to be, as a member of our parish tested positive for COVID-19 this past week, and now our church is closed and locked for two weeks, and we are again left on our own to say our own prayers and ask for our own blessings.   So, instead, I visited the little shrine alone this morning, placed flowers around her feet, said a “Hail Mary”, and then walked over to the blessing box next to it and made my weekly donation of tuna fish, mac n cheese and sardines.

And if you are a long-time reader of this blog, you will know that my family, too, has an outdoor statue of our Most Blessed Mother.  When we lost our first child, Francis, I wanted a statue of Our Lady to stand guard over his grave, and so my husband and I made a special trip to a local statuary to find just the right one.  We placed our statue next to Francis’ grave, which over time, became two more graves as we lost more children in miscarriage.  I cannot express the consolation that seeing that statue over my children has brought to me through the past 15 years, and she has always been there waiting each time that I took “flowers to Francis”. 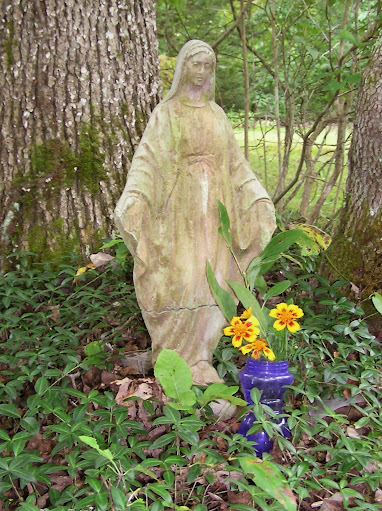 However, today, there is another statue in her place.  As it happens, when the couple who had donated the vintage statue of Our Lady decided not to place it back in the church lot’s shrine, they were left with the question of where should they keep it.  I encouraged them to take it home and set it up in their own yard, as a place of meditation and prayer, but they resisted this idea.  The wife said she was waiting for “just the right spot” because the statue meant so much to her, and she said that keeping it for themselves did not seem quite right.  And so, the statue stayed tucked away in storage for many more months.

One day recently, while visiting with her, I shared with the wife the story of our infertility struggle and mentioned the loss of three of our children.  I made the comment that we had buried our unborn babies, and she asked me where.  When I told her they are on our property, next to our Blessed Mother statue, she was astonished.  “That’s it!” she exclaimed.  “That’s where she belongs, next to your babies!” and she insisted that we place her beautiful vintage statue of Our Lady at their graves.  A few days later, she and her husband brought the lovely statue to our home, and we placed it over guard of Francis, Karol and Isaac-Anne. 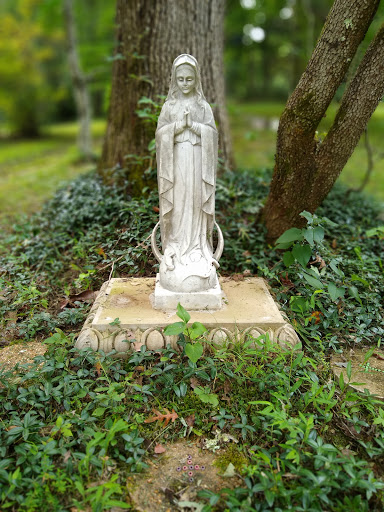 And there she stands today, on this Solemnity of the Assumption of the Most Blessed Virgin Mary, one year from the day that she was blessed in the church parking lot, having since passed through the hands of both evil and good, and then being put into storage but finally ending up just where, as my friend said, she belonged all along.  As always, our Blessed Mother is never outdone, and God responded to our plea for her safe return in a way we never imagined. He is so good and so full of surprises.

Today, as my family stood in front of her and renewed our children’s consecration to her once again, I thought about the words of St. Paul, who wrote that "all things work for good for those who love God”(Romans 8:28). Might I add, for those who love His mother, too.