-1-
The Surgery.   As you may recall, Joah was scheduled for a tonsillectomy on March 18.   That seems like a year ago now!   First, let me thank any and all of you who said a prayer on the little guy's (and my) behalf. The good news is that from check-in until check-out, the whole saga was over in about 3 hours.  The surgeon said everything went well and the sleep apnea issues should now be completely resolved.  We were told that Joah may also need to have tubes put in his ears during the surgery too, but the surgeon said the ears looked good so we were able to avoid that part.   Joah was such a trooper walking into the hospital, insisting on pushing his suitcase the entire way.


-2-
The Recovery.  Okay.  So before the surgery, in typical helicopter-mom fashion, I asked the doctor about a million questions and then a few days after that, I called his nurse (the doctor was kind enough to give me her number,  or maybe he was tired of talking to me?)   and asked her about a zillion more.   I wanted to be as prepared as possible for what was ahead.  I have to give the nurse credit, she was honest.  Completely honest.   In her words:  "after the surgery, be prepared for at least a week or two of hell".  Did I believe her? Not really.  She's just painting the worst case scenario, I told myself.   That'll never happen to me, I thought. Joah's a tough kid and little kids always bounce back fast, right?   Wrong.

Granted, it could've been much worst.   We didn't have any post-op bleeding to deal with.  We didn't have any high fevers or vomiting.   So hurrah for that! But my oh my.   The pain he was in.  It was heart wrenching to watch.  He screamed and screamed (which I know had to have made the pain worse but try explaining that to a 3 year-old).   He was not allowed to take any pain medicine stronger than over-the-counter doses of ibuprofen and acetaminophen.  And he would not swallow.   Period.   Which means he would not swallow the pain medicine.   Tom, who planned to go to work a few days after the surgery, had to stay home the entire week instead because I could not get pain medicine into Joah without one of us holding him down.   It was awful.  This put the phrase "tough love" into a whole new ball field.    The poor boy would fight with every ounce (and he has a lot of ounces!) against taking that teaspoon of medicine.    We tried bribery,we tried mixing the medicine with his drinks or soft food, we even tried taking some ourselves as good example to encourage him, but he was having none of it.   So, tough love it had to be.   Thankfully, after about 10 days, he seemed to be in less pain and we were able to back off the medicine.  After week two, he was back to eating his body weight in mac and cheese and, for the first time in two years, sleeping peacefully and silently. But we weren't quite over the trauma yet.   However, before I get to that part, let's talk about what else was going on....


-3-
The Packing.  Did I mention that during the post-surgery trauma, we were also trying to pack up the rest of our household so that we could move it 500 miles east?   Normally, I take a lot of pride in my ability to plan things to the n'th degree to avoid all foreseeable chaos.
Which is why I am still asking myself "what the Hades was I thinking" as I reflect upon these past three weeks of what the nurse aptly coined "hell".   Because not only were we dealing with a very needy, very emotional small child but in between traumatic medicine doses and cuddles, we were also dealing with a million things that had to be taken care of before we could close the U-Haul doors and say sayonara to the Show Me State for good.    And it is a darn good thing that I don't believe in signs from God, well, I don't believe in "bad" signs from God, because if I did, I'd probably be sitting in a padded room right now.   Here are just a few of the little things that happened, most of which I chose not to take as a "sign":


-4-
The Regression.  So by now, you are probably getting the picture that it's been a stressful few weeks.   Which leads me back to Joah.   Which actually leads me back to myself.   You see, before the surgery, Joah was just starting to show signs that he was moving out of the "terrible twos" and into the much less terrible threes.   I know some of you don't believe in the "terrible twos" so I could just say that half of my family has control issues.   That half being Joah and myself.   Someday, I hope to outgrow mine.   Before the surgery, Joah seemed to be outgrowing his. However,  post-surgery, we learned that there is something called "child regression" in which young children who have been through a traumatic event often begin acting younger than their age again.  Such seems to be the case with Joah.

I think we are moving out of it, although the poor little kid is still waking up at night looking for Mommy and has been having frequent tantrums.   No doubt the surgery combined with the sudden change in his home venue has totally rocked his little world.
I don't blame him for acting out.   I can totally relate because....

He's not the only one who has regressed these past few weeks. When Lent started, I was determined to tackle my "anger" issues...best described as losing my temper in 3 seconds flat when I was feeling overly stressed and physically exhausted.   I was making a conscious effort to take deep breaths, walk away, count to ten, say a Hail Mary, anything that would defuse any anger I could feel building up in me.   And it was working great.   And then these past three weeks happened, and after night after night of less than 8 hours sleep (caring for Joah) plus having my parents in the house for two weeks (they were gracious enough to come help but having two extra people in a small house during all this didn't exactly reduce stress) plus all the non-signs I already described took their toll and regress I did.   It wasn't pretty.   I am ashamed.   I apologized.   Thankfully, I have an understanding family.


-5-
The Trip.   So, last Friday was it.   I watched our home of 12 years fade away in my rear-view mirror and headed east with my two little boys in the backseat (Tom left the day before to get a head start) and a tear in my eye.    I am happy to be moving back to Kentucky but I can't deny that the time spent in Missouri was not only the most important chapter in my life, but also the hardest, and with that recognition came bittersweet emotions.

I was a bit concerned about making a 9 hour drive with two small children alone but God was with me the entire way.   Thanks to His grace and our vehicle's DVD player, we made the trip with only two potty stops and no tantrums.    The boys did great and are so excited to be in our new home.   They have lots of space for riding their trikes and there is no traffic to worry about.   In the distance, we hear frequent trains as they pass through and blow their whistles and each time he hears one, Joah will stop what he is doing and exclaim "you hear that?  that's a northbound one"  or "you hear that?  that's a southbound one".   Most of the time, he is right about the the direction the train is heading.   Pretty amazing to this mama.

I am enjoying the fact that Tom telecommutes now, and he has been consistently working from about 6 a.m. until 2 p.m. and then he is free to help me do unpacking, watch the boys, whatever.   No more 2 hours every day spent driving to and from work.   It's great and has been a long long time comin'.

-6-
The Unpacking.    Tom promises me that the unpacking will go faster than the packing did.   So far, he is right.   After spending the past five days bore-sighted on getting our kitchen organized and creating at least one space that was "box free", I am now looking at our new home and feeling much more at peace.
All remaining boxes have been sequestered to spare rooms where they will not be calling my name every moment.   I have also been enjoying using this move as a means towards simplifying our life by having less "stuff".    Moving has a way of reminding you of just how much "stuff" you can accumulate in a short period of time and how much "stuff" you really don't need. It has been spiritually liberating for Tom and me to downsize our material possessions.   Plus, the house looks a lot better for it! 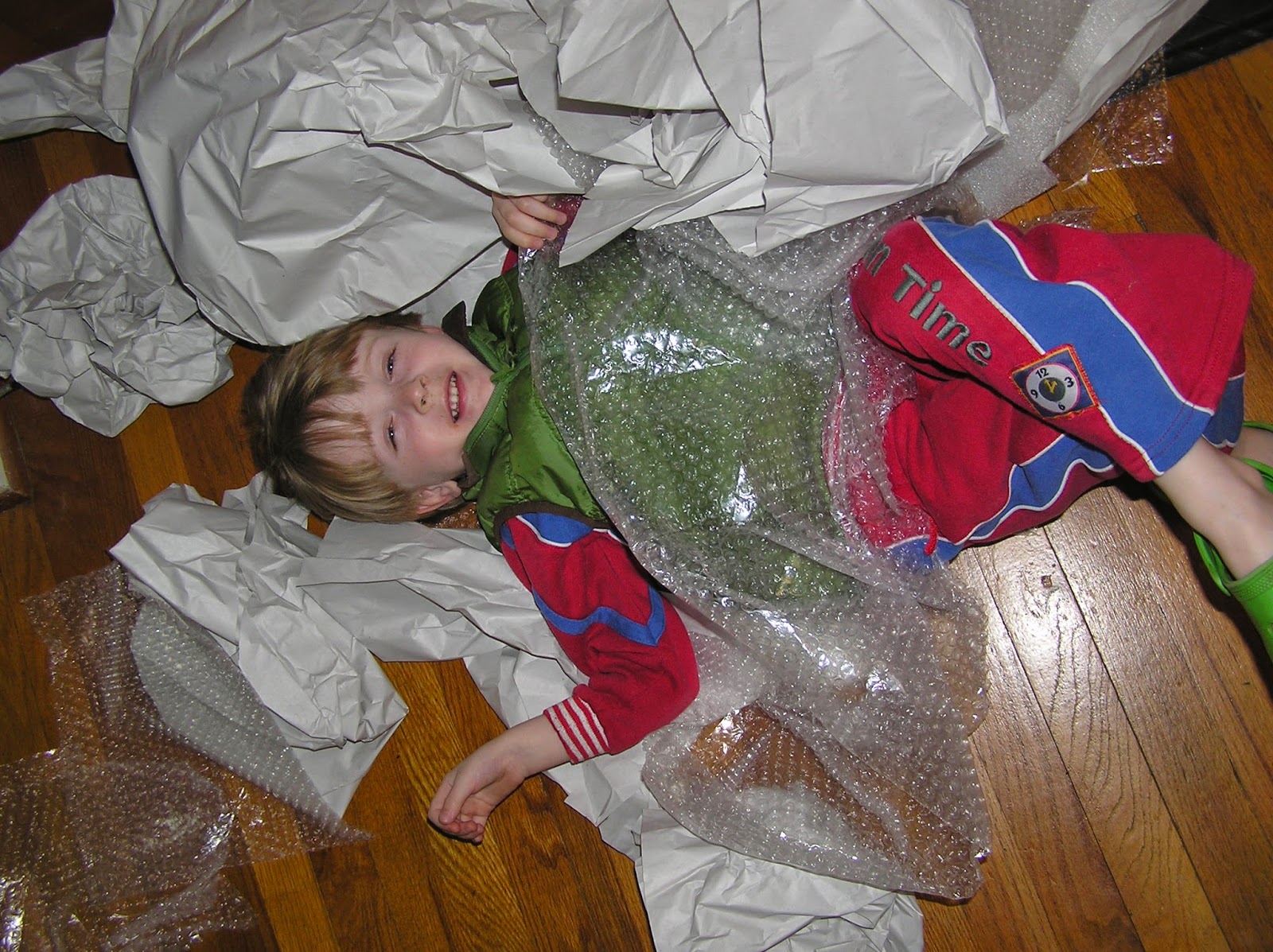 The New Normal.   So that's about it.    Tom and I both agree that these past three weeks have been the most chaotic of our married life.   The first three weeks before and after John was born were pretty darn crazy (maybe someday that will be a blog post in itself) but I think these three weeks beat that.   Maybe it is because we are older.   Maybe it is because we weren't entirely sure we made the right decision about making this move. Maybe it was because so many things just seemed to be going wrong at once.    I don't know.  What I do know is that we are all survivors.   And that God got us through it together, as a team.    And my parents still love me even after getting caught by my crossfire.   And my boys are happy.   And spring is here.    The next chapter has begun.