7 Quick Takes- A Birthday, A Feast Day, Overrun by the Wild and Running Wild

-1-
Thought maybe a little update was in store considering we've had two milestones to celebrate these past few weeks.   Of course, the biggest was celebrating the 4th year of this little guy!  I decided to have a little birthday party for him and he had a grand time.   He got the cake he requested "brown, with lots of icing" and way too many gifts from the way too generous grandparents (our kids are their only grandkids; 'nuf said).  But what he loved more than anything was just having other little kids around to play with.  Both he and his brother were all smiles and full of laughter as they ran wild with the other kids searching for Easter eggs (yes, we hunt Easter eggs year-round here;  we like to keep the "paschal people" theme going!) and playing on the slip-n-slide.    The party lasted well past bedtime, as they insisted on catching fireflies after dark in their pajamas and were already cranked up on cake and ice-cream.   As I told a friend the next morning at Mass when she commented that I looked a wee bit tired, "you ain't really partied until you've partied with four-year olds". 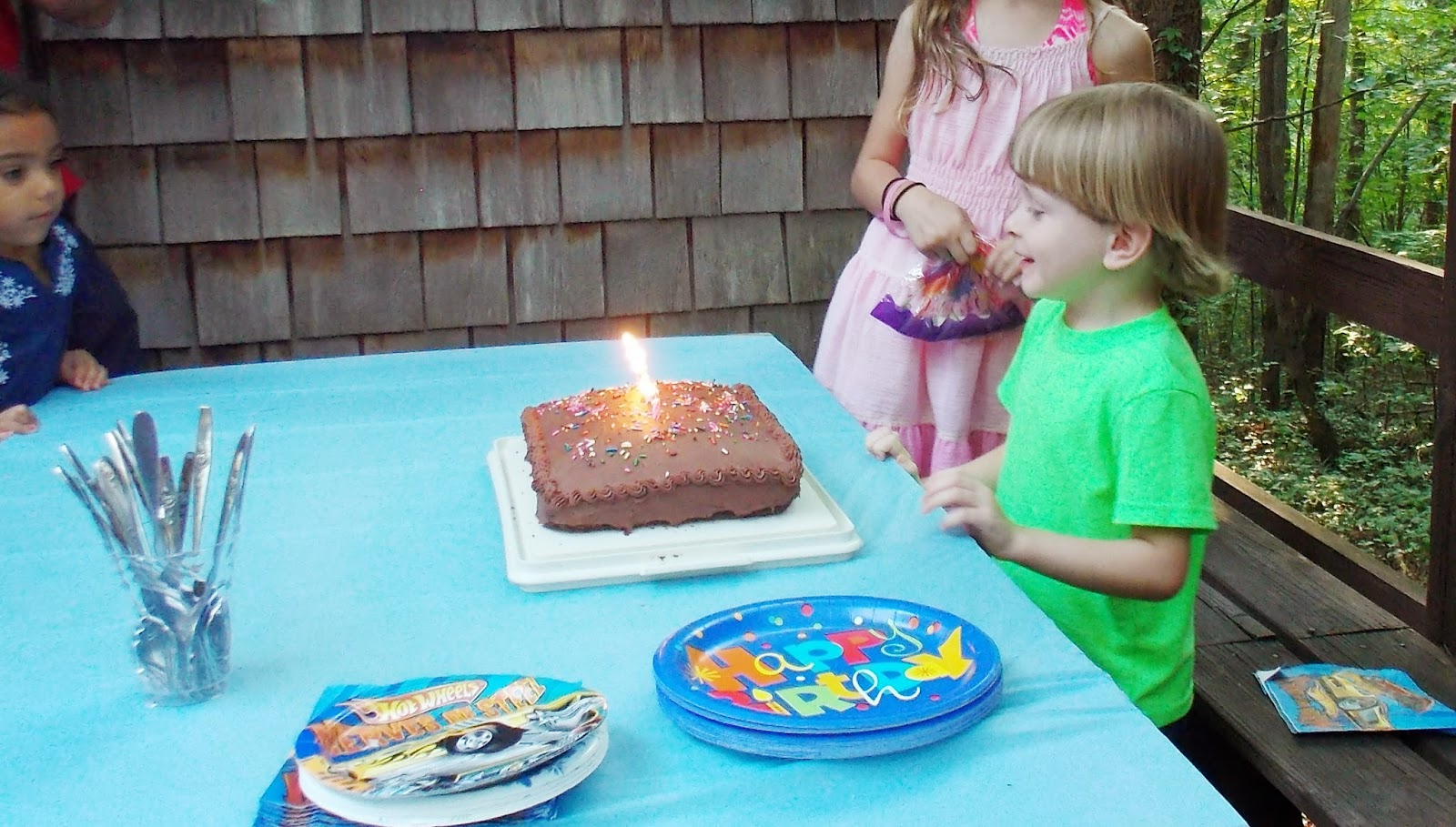 -2-
In addition to having John's birthday party on that day, July 26 was also our son Joah's feast day because it was the feast of Sts. Joachim and Anne, two very special saints to us and so many others who struggle with infertility.   One of our little ones in heaven is named for St. Anne and Joah is named after St. Joachim.   We named him Joah, however, to save him from a lifetime of having to say "no, it's Joe-ah-kim" (and actually, I'm not even sure most Catholics agree on how it is pronounced).   As a matter of fact, when we lived in Missouri, we lived near Joachim Creek.  Everyone called it "Joe-ack-him" which always sounded to me like "Joe, whack him!" and I could just picture my son whacking some little kid on the head (which he does frequently enough anyhow!).  Some others called it "Joe-kim" which sounded to me like "Choke him!"  Nope, that wouldn't work either.  So, we just stuck with Joah.  And later we found out that "Joah" means "brother of God"  which made it really feel right because Joah is such a gift from God to us and without him, our John would not have had a brother, and most likely, Joah would not have had one either.   So his existence particularly brought the gift of "brotherhood" to our family. Did I mention, too, that every day for 10 years, on my way to work, I drove past this little church, and when I did, I always asked St. Joachim to pray for us and help us have a child?   So, thank you, St. Joachim.


-3-
Not much new to report on the adoption front.   We have an orientation meeting with Catholic Charities in two weeks to start the process all over again. I'm not feeling encouraged at all but so much of this is out of my control.    I hope God understands the timing of all this because I sure don't.   I do feel more inclined to consider fostering, though, especially as our boys get a bit older.   I think the one thing that encourages me more than ever right now is just knowing that there are still options available when it comes to having more children in the house.   Whether or not they are actually "mine" is starting to feel less important.


-4-
Speaking of children in the house, this coming week, we are saying goodbye to the boys' cousins.   They've been visiting all summer and are like brothers and sister to our kids now.   The boys keep asking me if we can go visit them, and they haven't even left yet!   The sound of a houseful of kids all summer was music to our ears and it is going to be painfully quiet around here come September.   Well, at least as quiet as two preschool boys can make it, which now that I think about it, isn't quiet at all.

-5-
Moving to a new place this past spring meant starting over with a new garden spot, which meant I was totally unprepared for the voracious appetite of the deer on our property.  Despite cages around every tomato and squash plant, the varmints managed to gnaw their way right through most of our summer harvest. Oh well. In some ways, I am thankful because I didn't have much time for canning anyhow, and we still haven't consumed all the tomatoes, beans, and corn from gardens past.   I am going to try again with a fall garden, this time with deer-proofed raised beds, and am considering surrounding them with eight feet of concertina wire.  Nothing says "home" like a garden that resembles the perimeter of a maximum security federal penitentiary, right?   With any luck, we'll be eating fresh spinach at Christmas.   Not to mention, come November, I intend on getting my summer garden back from the deer in the form of venison. What goes around comes around, you rascally deer!

-6-
I suppose while I'm giving updates, I'll give a report on my new found habit of running.   Short report.  I hate it.  But I'm still doing it.   I'm wondering how many miles a person has to run before it starts becoming enjoyable (not to mention, easier)?   My friend, the one who inspired me to adopt this insane form of exercise, just hit her 1000th (yes, that's three zeros!) mile of running and says she loves it and that I just need to give it some time.   I'm guessing that means I'm still probably about 992 miles away from it becoming fun.   My niece decided to become my running partner for a while, but that only lasted about a week.   Then it was just me and the dog, which lasted about three weeks, and now even she disappears when I step out in my running shoes.   And based upon my lifetime of experience, I tend to believe that most 10-year olds and dogs are smarter than most adult humans.    Good thing I never claimed to be smart.


-7-
And then there's the other big decision looming over my head these days. Preschool.  Do I or don't I?   Now, for all you homeschoolers out there, hear me out.   I'm totally 100% supportive of homeschooling. I'm not sure I consider myself a homeschooler, unless it might be by default, simply because our boys haven't attended any formal school to-date (well, there was a 6 day trial run, but that failed miserably).  I think that, so far, I would consider my "technique" closer to "unschooling".  However, now we have been given the opportunity to send our boys to a small Christian school that offers two-days a week of preschool classes (aka, babysitting).   First impressions are very favorable, and I've heard nothing but good stuff about it from other parents.  So, we are considering it.  I have a few more weeks to decide.   I have no doubt the boys would love it, plus it's free (funded by a local philanthropist), classes are small, and the boys would be in separate groups, so that part all sounds good. But I wonder how disruptive it will be to our daily routine that we already have? We have a pretty good groove going over in these parts nowadays and I kinda hate to rock the boat.   So, stay tuned.   So much drama, I know.

That's about it for now.  Hope you have a great weekend and thank you to Jen for hosting another Quick Takes!   And speaking of Jen, how cool that she hosted this?    And even cooler, that it inspired others to talk about this?   Thank you, ladies!
Posted by Lynda at 3:13 PM