Linking up with Kelly over at This Ain't the Lyceum.


--1--
Hoping to get this post up yesterday, but late again.  No excuses, other than I have had a major case of spring fever and took advantage of the January thaw that we had this week to be outside instead of on my laptop during the afternoon hours when the boys nap (yep, my boys still take simultaneous naps even at the ripe old age of four, and yep, it is still the most heavenly two-hours of my day). No worries, though, because as the boys slept, Tom stayed inside and did bread-earning work on his laptop while I was outside setting the woods on fire. I just can't resist a good spring-like burn day.  So, he brings home the bacon while I do yard work with a drip torch. Sounds a like a great partnership to me!

--2--
The January thaw also meant that everyone and anyone who burns wood as a primary heat source (that would include us) was out in the forest this week gathering whatever dead and down material they could find and tossing it into the back of their pickup truck.   We were no exception and so, for a couple of days, my dad gave me a refresher on how to use the chainsaw and we brought home two loads of yellow poplar, ready to be split and stacked for next year.  Tom and I have a pretty good deal (reference great partnership mentioned above).  I cut it and he splits and stacks it.   I think I got the better end of that deal, too!   Can't wait until we have a couple of strapping young men (aka, our sons) to help Tom with the less fun part, but it'll be a warm day in January before Mama gives up her chainsaw!

--3--
So, for Christmas, I got one of those techno devices that you wear on your waistband and it counts how many steps you take in a day.  I didn't really care how many steps I took, but I did want something that would help me keep track of how far I was running during my workout.   Up until I got this fancy little gadget, I just timed my runs (thirty minutes including time to warm up and roust the dog) but I now know that my runs average two to three miles.  Funny, felt more like fifteen!  Anyhow, I also found out on the first day that I wore the thing that I exceeded the recommended goal of taking 10,000 steps in a day.  No wonder I am so tired at night!   People often ask me how I stay thin and my response is that I chase two wild little boys around all day, and now I have the science to prove it!  My next great experiment is to put this gadget on one of the boys and see if it can count up to 125,000 steps in a day, because I'm pretty sure that would be on the low end of their daily exertion level (I did the math, and figure I take one step for each of their ten).

--4--
So the big news around here, in case you missed it, is that we are actively pursuing potential adoption matches again.  It's been interesting this go-around. Even though we have adopted before, this is the first time we've used an adoption consultant, and rather than hearing about potential birthmother matches once every few months, we're hearing about them about once a week.  That's the good news, and does give us encouragement.  The bad news is that most of the situations we are presented with are not cases we are entirely comfortable with. So, we will probably be waiting a while for the right situation.  With each, however, Tom and I discuss and discern and pray.  Please pray with us, if you would, that God will lead us to make the best decision for us and our future adopted child and birthparents.

--5--
And speaking of prayer, I keep meaning to update folks on a couple of blog posts I did a while back. First, there was this post, in which I asked for prayers for our priest.  Thank you all of you who offered a prayer or two on his behalf.   He has been home for a while now, and is slowly recovering. Emphasis on the "slowly" part.  We had hoped he'd be back to his priestly duties by now but it appears that it may be March or later before he returns.  He is still dealing with a lot of pain and has to learn to walk again, so please keep him in your prayers.  In the meantime, we've had a wonderful priest subbing for him on weekends whom we've really come to love.  He drives six-hours round-trip every weekend just to meet our needs, so may God truly bless him as well.

-6--
Also, I wrote this post a few months ago and just a few weeks after publishing it, the dear woman who was the mother of the young man who died almost lost her husband as well.  By a miracle, he is still alive, but not doing very well.  Please keep her in your prayers.   This is one of those cases where I keep asking myself, Lord, how much grief do you think one person can handle?   Of course, there is no answer to that question that any of us will ever receive on this side of heaven.

--7--
And on a lighter note, our little John had a bit of a milestone last Sunday when he served at Mass for the first time!   It wasn't planned, but the young man who normally serves was not at Mass so a church friend took John up and helped him along and he did great!  Proud Mama here!  The kid has no inhibitions about anything, and said he wants to do it again.  Considering we have fewer than ten kids in our entire parish (we're a small mission parish), no doubt he'll get plenty more chances.  Do they make albs in size 4T?   :o)

--BONUS--
And congrats if you made it this far, because this is a bonus edition of Quick Takes!   I just couldn't wrap this up without sharing a few photos from today's morning walk.   Being in the southern part of Appalachia, we don't get too much snow here, but when we awoke this morning, we were greeted with the most beautiful snowfall.  It was just the kind of snow I like...it stuck to everything except the roads!   So, we filled our bellies with sourdough pancakes and leftover pork loin then donned our rubber boots and headed to some nearby overlooks to enjoy this fleeting visit from Old Man Winter. The snow was all gone by noon, but not before I captured it for posterity's sake.  And yours.   Enjoy! 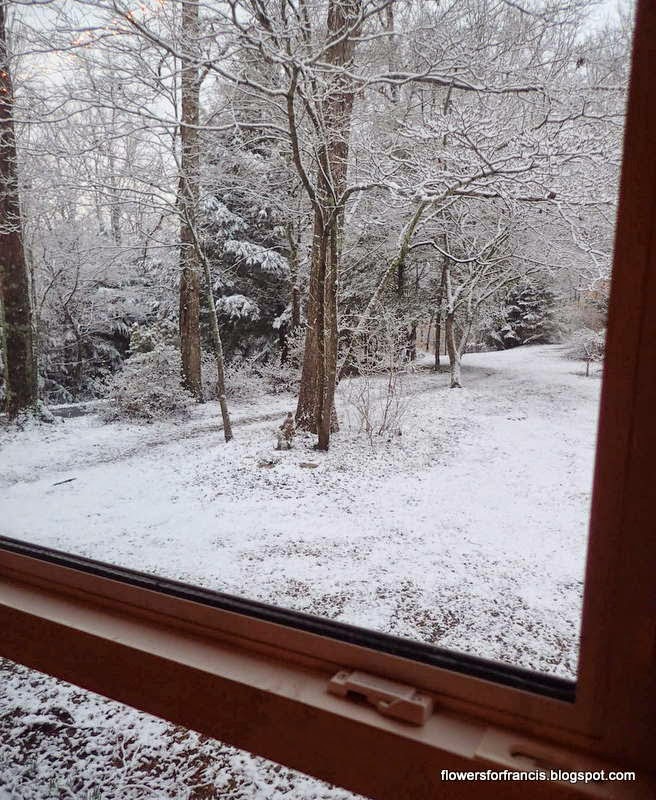 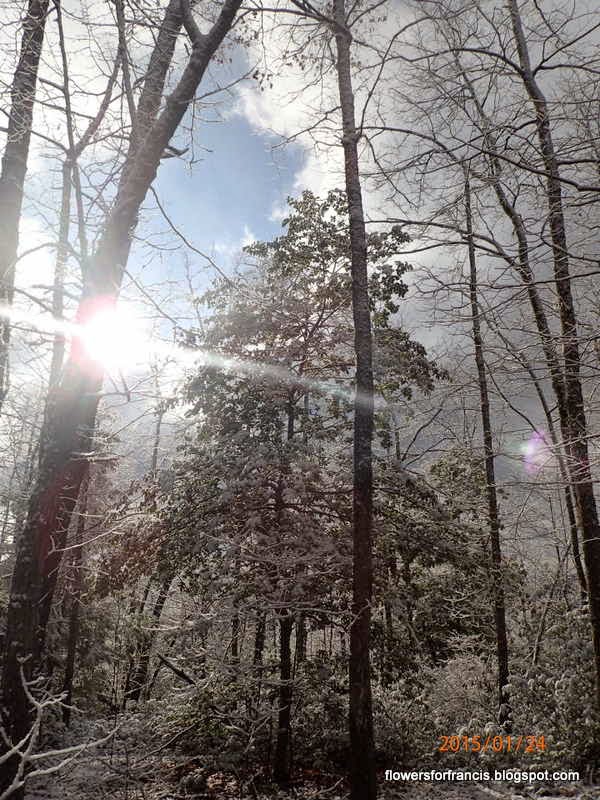 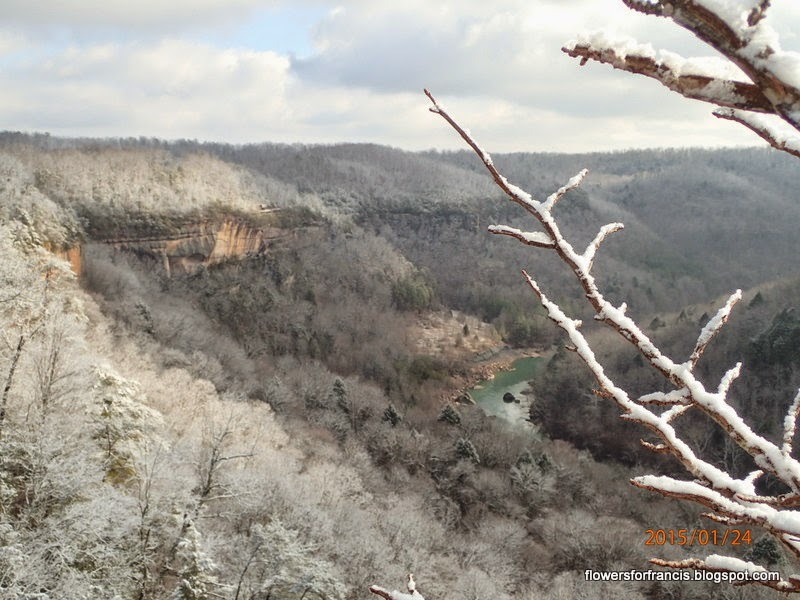 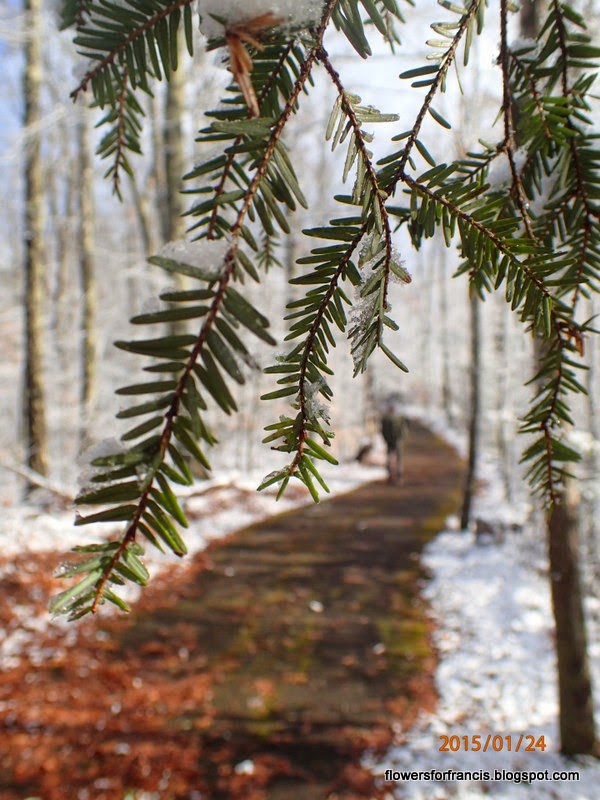 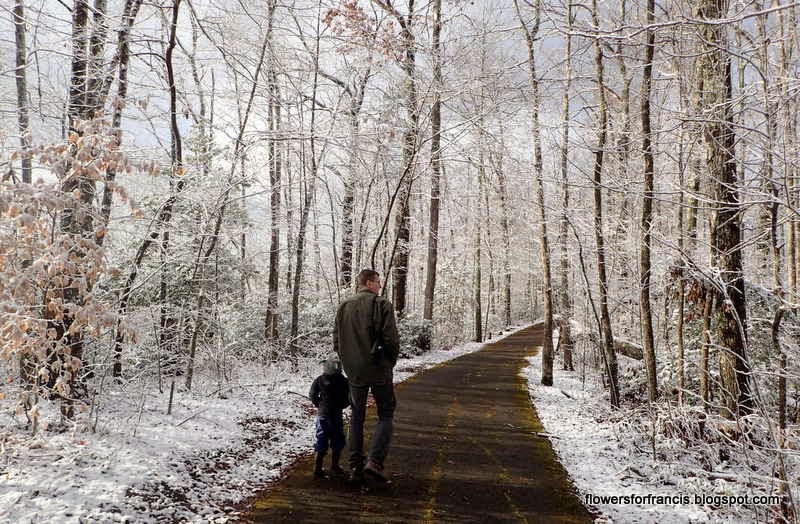