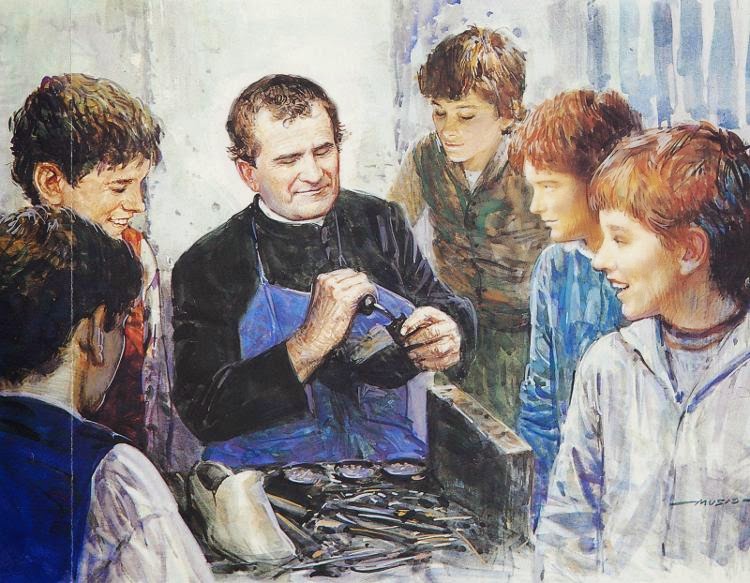 At the end of December, like many of you, I visited this website, said a quick prayer, and asked God to give me a saint who would help me through the coming year. A saint whose intercession I would need.   I hadn't done this before but others seemed to swear by it so I figured, what the heck, I'll give it a try.   So I did it and I got St. Leopold the III, a saint unfamiliar to me but one I was anxious to learn about.  And then I read that he was the patron saint of large families, stepfamilies, and {gasp!} against the death of children.

Large family?  So not funny.   Infertile gal here.   Stepfamilies?  Well, for that to happen in my family, someone would have to die.  Again, not funny.   And death of children?   Very very not funny.

I was tempted to hit the "back" button and go with my second choice, but figured I'd tempted fate enough.   It certainly was a sobering reminder that we never know what the year might bring.   If St. Leopold the III has chosen me, I suppose in time, I'll know why.  Yet, if it's all the same to you St. Leopold, thanks but no thanks. We're all good.

However, this "choose a saint" business also got me to thinking about what saint I would have chosen for this year if it has been left up to me to make the choice rather than letting a computerized mindless random name generator make the choice for me.   I've thought about this a lot, and the name that keeps coming to me has been St. John Bosco.

It's interesting how I have been drawn to certain saints during various periods of my life. As a child, I loved the story of Fatima and the fact that our Blessed Mother appeared to the children Lucia, Francisco and Jacinta.  As a teen, I chose St. Kateri for my Confirmation saint because of our shared Native American heritage.  In my college days, I loved reading the writings of Blessed Mother Teresa and learning about modern day martyrs such as Archbishop Oscar Romero and other saints who died for a just cause.   In my career, I frequently asked St. Francis of Assisi to guide me, and as a married woman facing the tedious daily task of caring for a home and being sensitive to the needs of the other person living with me, St. Therese was always there for me. And then there were all the saints upon whom I relied during the years I prayed for a child...St. Gerard, St. Gianna, St. John the Baptist, St. Elizabeth, St. John Paul II, Sts. Anne and Joachim, the list goes on and on...

And here I am now, many saints later, facing new challenges that come from parenting two little boys.  Now that the baby years are over (for now), my husband and I have found ourselves entering unfamiliar territory.  I come from a family of girls. My husband did not have siblings.  The homes we grew up in were mostly quiet and peaceful.  There was no wrestling on the floor during commercial breaks, no hitting and kicking to "see if it hurts", no lifting or throwing of large heavy objects (e. g. firewood, bricks, rocks, sofa cushions, etc), no desire to jump in the mud to see who can get dirtiest, and (dare I say it) no peeing or spitting contests (in which they go for distance...good aim is optional), just to name a few.  Life in the trenches with two little boys with limitless energy and a penchant for destruction has had us more than once calling upon the heavens for a little intercessory help down here below.

I don't know a lot about St. John Bosco but I do know that he had a soft spot in his heart for the boys that nobody else wanted around.  He spent his life reaching out to boys who were considered wild, loud, mean, ornery, and who everyone else considered delinquents and lost causes.   And more than once, he turned them around.  He taught them to pray, took them to Mass, he praised them when he saw them exercising even the smallest degree of virtue, and he refused to use harsh discipline, choosing instead to offer love first instead of instilling fear.   He introduced them to music, and took frequent walks with them to calm their restless souls. Over the decades, thousands of the boys he mentored became priests and educators and his legacy remains today in the Salesian Society, which he founded.

I need a saint like that now, as I try my hand at turning wild restless little souls into saints.   I need to be reminded that on the hardest days, it is always love that I should still offer first.  I need to know that no matter how difficult or challenging a little boy may be, he is already wonderful in God's eyes.  If John Bosco can do it with thousands, I'm confident that he can help me find the grace I need to do it with two.

I do not know what this coming year will bring to me and my family.   Maybe St. Leopold knows.   But I do know what each day has brought thus far, which is why, right now, St. John Bosco, I choose you.  Let's tackle these challenges together during the coming year. Please pray for me, St. John Bosco.  And for all the boys in our world who simply need love first.
And Happy Feast Day!