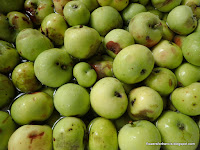 It's a strange thing to live on a piece of land that you knew as a child and where the people you knew as a child once walked but now they are gone. It's even stranger to watch your own children walk on that same land and see them making memories that will carry them into a time when they too, will reflect on the people who walked with them through their childhood but are gone.

The old apple trees are thinning their branches of the heavy load of fruit right now and every few minutes, one can hear the thump as the trees shed themselves of their over-abundance. Why some apples succumb to this early shedding that we call the June drop when other apples on the trees do not is still somewhat of a mystery. What is known is that even in the world of fruit trees, only the strongest survive, and that none of the apples would grow and mature if not for this early summer sacrifice.

Our boys relish in climbing the old trees, and a milestone was reached a few months ago when they both mastered jumping down from them as well. Mommy was no longer needed to assist with the precarious leap that freed them from the apple tree's boughs.  In that moment, I realized that they'd grown up before me just a little bit more.

This past week, we filled up our five-gallon buckets with the June apples. They may have been discarded by the tree itself, but they would fill our bellies none-the-less. As we picked the apples up off the ground, my father, now in his mid-seventies, told the story about when he was a small boy and how he ate so many raw June apples one day that his mother thought he'd developed appendicitis. The doctor had been called and his father was not pleased, to say the least, to find that he'd just spent five hard-earned dollars on a doctor's call for a boy who had eaten too many green apples! This story prepared me for the stomach ache that our son John would develop that same evening, as history sought to replay itself for yet another generation.

And generations they have been...all witnessed by those old apple trees.  I remember seeing my grandfather as a old man, picking up the ripe and fallen apples in the cool morning of late summer. In the heat of the day, he'd spend hours sitting in the shade of those trees, slicing the apples with his worn pocket knife. The June apples had been cooked two months earlier and turned into apple sauce, but the late summer apples were always dried. Spread out on wooden boards covered with newspapers, the apples would cure in the sunlight and I would snatch a few for a snack while I stood over them, reading old news.

I thought of all these things this week as I stirred yet another pot of June apples cooking slowly on the stovetop. I thought about how nobody dries apples anymore and I wonder if that means nobody makes stack cakes anymore either...or at least, the old-fashioned kind of stack cake that I grew up knowing.  I thought about my grandfather and how he showed me how to pick up the apples without getting stung by the yellow-jacket that was almost always waiting on the side of the apple that you couldn't see.  I thought about my grandmother and how she would always overly sweeten the apples just a bit because she had a terrible sweet tooth, and how she would always bake a fresh batch of biscuits to go with them, and how much I miss those biscuits, which will never be duplicated. As a young girl, I shared many an afternoon meal with my grandparents, feasting on those hot biscuits and cooked June apples and chasing it all down with a tall, cold glass of "sweet milk".

It doesn't take much to leave a legacy. Decades ago, my great-grandmother planted daffodils along the path to her front porch. Today, she and the house are gone. Nothing tangible of her or her life remains other than a headstone. Yet, every March, a barren hillside surrounded by forest becomes a carpet of yellow jonquils as those daffodils bloom and spread. I loved romping through them as a girl and now my boys do the same.  I never knew her, but I never see a daffodil without thinking about her.

Our old apple trees are slowly dying.  Their heartwood is rotting and the tips of their branches are dying back.  There will be no apple crop next year given that we have a bounty this year, but will there be one the year after that?  After this summer, the old apple trees will be granted a year of rest, but will they be able to produce another crop come June of 2017?  Perhaps. What is more certain is that they will not witness a fourth generation of children sitting under their branches, eating too many green apples. New apple trees can be planted in their places someday, and new memories will hopefully be formed under those branches long after I am gone, but there will never be other apple trees quite like these. These trees with these shadows and these memories. 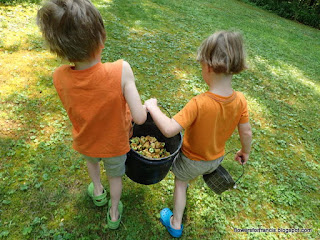