7 Quick Takes - Trial Runs, Feasts, and Getting Outside

--1--
The boys are both napping and if my pecking on the keyboard or the rumbling of the approaching thunderstorm as I pound out this post doesn't wake them, I just might be able to get this Quick Take written in record time.  Have I mentioned lately how wonderful it is to have four-year-olds who still nap?  Truly wonderful. Of course, we went through plenty of nap time strikes over the past few years, but I was not about to give up my two-hour daily sanity break easily! So, we powered through them and it has been totally worth it.  Now, both boys look forward to naps.  It is a great thing and I'm gonna enjoy every remaining day of it that I can get.


--2--
This love of naps and my desire to let the boys have the rest they need also influenced another big decision we made lately. We have decided to try homeschooling for the summer.  If all goes well, we will continue it into the coming school year.  So far, it's had its ups and downs, but mostly ups. I found a simple (read: easy) Catholic curriculum that I am following for kindergarten and John is really enjoying it. Joah is still in the pre-K years, but also doing well and is absorbing what he hears John learning.  So far, we are only spending about 30 to 45 minutes a day doing "lessons" in which we actually sit at the kitchen table and do "school", but folks who have homeschooled and know a lot more about this stuff than I do tell me that no more than that is really needed at the ages of four and five.  Of course, we do plenty of other stuff like reading and living a big part of our lives outside, and the boys are always engaged in something (albeit, sometimes something destructive!), so I guess that all counts.  Anyhow, we'll see how things are going come August, but for now, Tom and I are thinking homeschooling just might be a good fit for our family. 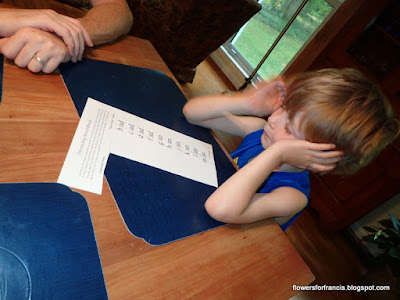 --3--
We also have finally wrapped up T-Ball season. This was the second year our boys played and I like to think that they are improving, although it is already looking pretty clear that baseball scholarships will not be in their future. Unlike last year, when the boys had no idea which end of a bat to hold and saw the ball field as one giant sandbox, this year, they actually made a few hits and sorta knew which direction to run to get to first base.  There were a few times when we had to repeat the mantra "there's no crying in baseball" to them because another kid grabbed the ball or outran them in the outfield, but overall, things went better than expected, thanks to some very low standards that Tom and I set at the beginning of the season. There was minimal sand-throwing and whining and Joah even managed to keep his hat on during all the games (I can't say the same for John).  Next year, perhaps we'll conquer keeping gloves on as well and not climbing the fence in the dugout.

--4--
Along with the homeschooling, I've been trying to make it a point to celebrate at least one liturgical feast day a month.  It's been fun incorporating the liturgical year into our day-to-day lives and I really enjoy reading blogs like Kendra's to learn how to do it.  Last week, we enjoyed "meat Friday" and celebrated the feast of the Most Sacred Heart of Jesus by making a pork loin to go along with our June apples, biscuits and blackberry cobbler.

I also made it a point to finish up this statue before the feast day. 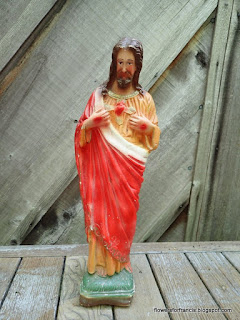 He was found at a local flea market and I paid five dollars for Him.  I thought He looked a little "cheesy" with the bright paint colors that someone had used, and so I decided to try to antique Him a bit.   Here is what it looked like after the antiquing. 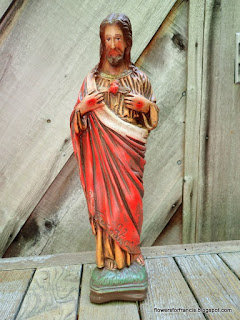 Hopefully, a little less cheesy and a little more classy?  Anyhow, I put him on display for the feast day and He watched over our living room for about a week until one of the boys dropped a stuffed animal on top of His head by accident and He came crashing to the floor and shattered into pieces. Nothing ceramic lasts too long in our house, unfortunately.  Time to go back to the flea market to see what other liturgical treasure might be found!


--5--
It's hard to believe that this coming week will mark one year since I started running.  I still try to run three times a week and it's still just me and the dog, but she is proving to be a worthy running partner most days.  I think it has been good for my soul as well as my body to run regularly.  Many are the mornings I've been stressed or anxious and a good run makes it all just melt away.  I really run more now for the mental release than the physical.  There is just something empowering about running in the rain, snow, or, as it is now, heat and humidity. Sometimes conquering little things like that gives me the confidence that I can conquer bigger things like the endless wait that goes with trying to adopt again, or the stress that comes from challenging relationships, or the marathon-like stamina that is often needed just to get through a day with two little ones.  To mark my one-year of running, I am considering entering my first 5K at the end of next month...something I never would've dreamed of a year ago.


--6--
We've got a busy weekend lined up here. Tom is celebrating his birthday this weekend and since this Sunday is also Father's Day, he has picked a menu for his special day that looks something like this:  ribs, brats, beans, pie.  I guess it's up to me to get something green on his plate to balance it out!  And can anyone explain to me why guys prefer pie over cake?  Seriously, I've never met a guy who didn't love pie.  After almost fourteen years of marriage, I've come to realize that there aren't many rifts between Tom and I that a chocolate pie can't fix.


--7--
Like many others, I've been sifting through the commentaries and analyses of Pope Francis' latest encyclical Laudato Si.  I haven't actually read the entire text yet but hope to do so soon.  I am encouraged, however, to see emphasis again being placed upon our role as stewards of God's creation and our connection to the natural world. Having spent two decades working in the field of conservation biology, I can say that much of what I've read regarding this latest encyclical rings true. Too many of us have lost a real connection to our natural world to the point that we frequently overlook the beauty of creation that surrounds us every day. I hope that this latest encyclical inspires all of us to take more time to just get outside, maybe learn more about the creatures in our own backyards, and most of all, share that with others. God has given us not just our families and friends but also a whole world of creatures to remind us that we are never alone. The natural world outside our doors is not something to be feared, conquered or just occasionally visited.  It is meant to be a part of us just as we are a part of it. 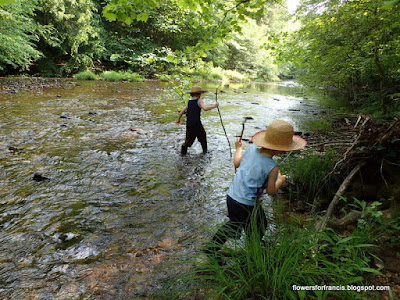 I hope you have a great weekend!   Thank you for stopping by and visiting my Quick Takes and thank you to Kelly for hosting mine and others!

Oh...and nope, I didn't finish this during the boys' naps thanks to a kid who can hear like a bat...maybe next time!
Posted by Lynda at 10:20 PM