After a month already passing (wow, that was fast!) since I did my last quick takes, I thought it was time for another round.  I apologize in advance, however, if this one is a bit of a downer.  Not that my problems are huge because they aren't, but it has been one of those weeks, if you know what I mean. Feel free to click away now if you are looking for something a little more uplifting.  I won't blame you a bit!


--1--
Blogging has been taking a bit of a hiatus here as we slowly move out of summer. Any spare time in the past month went mostly towards digging potatoes, canning tomatoes and green beans and planting our fall garden.  Then, just as things began to slow down, I got hit with a bad case of food poisoning last week.  We hardly ever eat out, but I caved last Sunday and took the easy way out.  Man, did I pay for that decision. Thankfully, nobody ate the same meal that I ordered, and everyone else in the family was fine.  I'm thankful, too, for a husband who was at home (and not on a business trip) and able to pick up the pieces while I was out of commission for a few days. If there was a silver lining to this nasty episode, it was that I had him for backup. I think that is the last time I will eat fast food for a very long time.  It's never worth it. 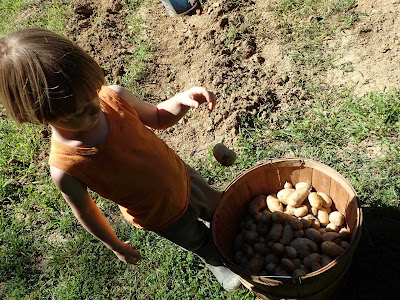 --2--
Part of our new end-of-summer routine has included Joah starting preschool two days a week now and continuing with homeschooling for John.  John just finished up his pre-reading workbook today and was so proud of his certificate!  It took him 12 weeks to complete the workbook and he has done so well.  He is ready to start reading his first beginner book now.  He is growing up so fast, and I'm so glad I still get to spend my days with him rather than watching him go away to school every morning.  That day will come soon enough. 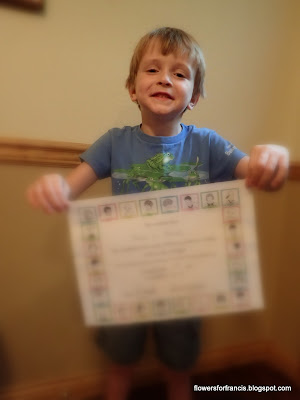 --3--
However, there is one part of homeschooling that I was completely unprepared for and that is the disapproval that so many people have towards homeschoolers. I've really had to grow another layer of skin this past month, and my tongue is getting numb from biting it. I had no idea so many people are against homeschooling! Most of the reactions have been elephant-in-the-room silence, but a few have been snide remarks and passive-aggressive comments.  It hurts considering this has been coming from close friends and family who I thought knew us well enough to trust our parenting decisions. Anyhow, I'm sure those of you reading this and who are experienced homeschoolers are not surprised, but for anyone who still may be considering it, just be ready for some backlash. Most of the time, I don't try to justify our decision.  I'm hoping that time will tell the tale and perhaps some of them will come around.  Thankfully, I've become quite accustomed to being the odd-duck and so this is not unfamiliar territory.


--4--
We got another potential adoption situation this past week, too.  And again, it slipped right through our fingers.  Not because we failed to respond.   We just failed to respond fast enough.   Five hours after we became aware of the situation and were asked if we wanted to present our profile to the birthmother, we were told by the agency that they were not taking any new profiles.  Five hours! That's how competitive the domestic adoption arena is, folks.  There were so many waiting families that responded to this one birthmother situation that within a few hours, no other families were being considered.  It is all done on a first come-first serve basis.  My husband and I didn't even have time to discuss the situation before our window closed.  This has happened to us more than once now.  And these are not perfect situations.  These are situations that have already been passed over by other waiting families and are presented to couples like my husband and I who are open to special needs, etc.  And even then, these babies are wanted by so many...desperately.   Of course, that's a good thing.   It's just hard to wait so long and miss even having a chance by a few hours.  Infant adoption should never have turned into such a competitive and expensive business in our country, but it has.


--5--
As time continues to pass by with no adoption possibilities playing out, I find myself often wondering if we should just throw in the towel.  Our home study will expire in three months, and this will be the third time it has done so.   During those three years, we've never even come close to being considered.  Part of that is our own fault, because we are not willing to adopt at any cost and do have certain ethical boundaries we do not want to cross.  Part of it is because we listed with agencies that do not promise birthmothers the moon, so to speak. And part of it is because of our age now, which certainly is not working to our advantage.  Our boys still ask often about when are they going to have a new baby sister or brother and now I tell them it may not happen, and that not everyone who wants a baby gets one. It breaks my heart each time. We have been so ready for so long.


--6--
On a lighter note, we celebrated the Blessed Mother's birthday this past week.  I made some cupcakes using this recipe, which I love because it is easy and the cupcakes are firm and not too crumbly, which is important when you have kids who insist on walking around while eating.  To keep it even simpler, I just dusted the cupcakes with powdered sugar and stuck a candle in each one.  The boys loved them! Joah called them sweet muffins. I also made frybread for supper for a special treat, as a nod to our Lady of Guadalupe.  A little honey on some frybread will bring out the happy in anyone, and I hope Our Lady smiled as she watched us. 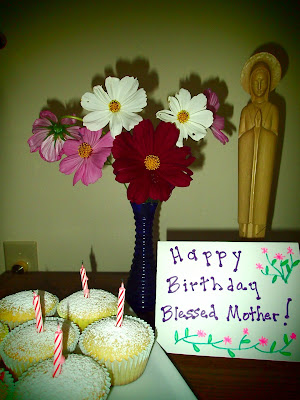 --7--
That's about it from here.  One high point of this past week was discovering that a couple of photographs I submitted to a local photography contest made it to the finals.  They announced the winners last weekend and even though I wasn't one of them (not that I should have been...some of the other photos submitted were much better!), it was exciting to at least be considered.  Below are my two photos that made it to the finals.  One was of John when we went hiking this past spring, and the other is a very rare species of snail found in the forest here.  I hope the photos inspire you to get outside this weekend and enjoy what I hope for most of us is some beautiful early autumn weather! 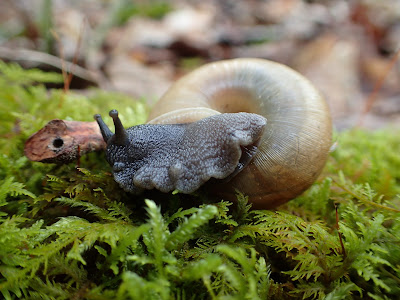 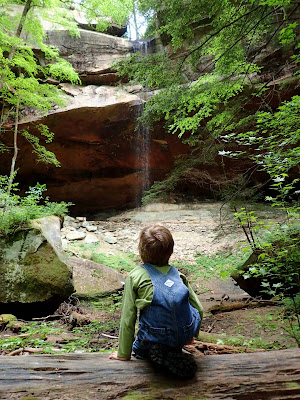 Have a wonderful weekend, and don't forget to visit Kelly at her blog for more Quick Takes!
Posted by Lynda at 7:56 AM