My Lesson From A Rattlesnake

A couple of weeks ago, my son almost stepped on this rattlesnake. 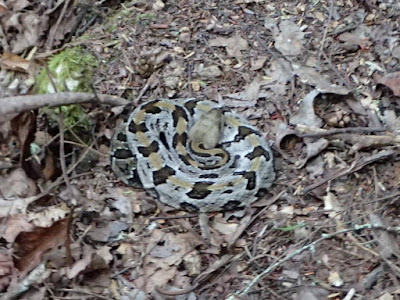 We were on a trail that I have hiked probably a hundred times.  And never during any of those times have I ever encountered a poisonous snake, let alone a rattlesnake.  Rattlesnakes here are rare, so rare that they have been considered for state listing status.   So, to have such a close call with one took me completely by surprise.  To see my son’s boot land within a couple of inches of it took my breath away.

Thankfully, like most snakes, this one relied on its camouflage to protect it and it did not flinch when my son walked so closely to it.   After emphasizing to my son the danger the snake presented, and the respect that such danger demanded, we gingerly walked away from it and continued on our hike.  It had been a close call.

Since that moment, I have replayed the scene of that snake and my son’s foot landing so closely to it over and over in my head.  I know that I should have been in the lead.  We had started with me in the lead, but I had caved to my son’s incessant begging to let him walk in front.  He had only been in front for a few feet before he nearly stepped on the rattlesnake.   Had he stepped on it and been bitten, I would’ve never forgiven myself.   I should have been in front.

Like so many relationships in life, the parent-child relationship is a constant balancing of give and take.  It’s a one shot deal, raising kids, and I struggle daily with the boundaries needed in order to hopefully get it right.  “We need more free-range children” was a headline I saw to a story published this past week, and while I tend to agree with the premise, there is little advice available regarding how to achieve that without crossing the line between responsible and what many consider irresponsible parenting.

My children have very few inhibitions.  They are adventurous, confident, brave children.  These are traits that I believe will serve them well one day, but I also worry that their strong-willed, fearless natures may also lead them astray. Once, I found them completely out of my sight, at the bottom of the hill, playing in the creek that they knew was there.  They had been told many times to never go to the creek alone, yet they couldn’t resist the lure of the small waterfall that they knew was there. When I found them, they were knee-deep in water, sliding joyfully down the rocks with no thought whatsoever of the fear and concern they’d caused in their dear mother.  Like most children, mine are constantly pushing the boundaries that their father and I put in place.

Of course, it’s not just children who like to push against boundaries.  It seems like lately, we as a society have been choosing to ignore or push against a lot of boundaries; boundaries that have been in place for millennia and that are part of the natural law, which of course, is also God’s law.  Most of the time, we get away with it with few consequences.  Like the rattlesnake in the leaves, the consequences remain well hidden, waiting only for us to get a little closer, and a little closer. In the meantime, we rejoice in the moment that we are splashing in the creek just above the waterfall, or skipping down the forest trail paying no heed to what lies ahead.

God is so merciful to us and our lives are riddled with dozens of second chances that He gives us every day.  Our guardian angels stand with us, always at the ready.  But even they can only do so much.  Like my son, if we are persistent enough, incessant enough, and determined to not let the wiser one lead, then I wonder if perhaps even our guardian angels and the Lord Himself might feel compelled to step aside.  Refusing to be obedient, we let our free will dominate and soon, we find ourselves walking with our guardians behind us, where they most likely cringe with every step we take.

My son had no idea of the danger he was in when he bounced down the trail.  He knew I was close by, within arms reach, and for him, that was close enough.   But he only thought it was close enough because he could not see what I could see.  He saw only the trail in front of him, beckoning him in the direction that he wanted to go, and he was in a hurry to go down it.  He did not see the danger lying on the trail’s edge, hidden, waiting.

It was a good lesson for the two of us.  When he heard me suddenly and unexpectedly shout “Stop!  Don’t move!”, he immediately responded to the authority and concern that he could hear in my voice.  As I focused his attention upon the rattlesnake that he had completely overlooked, he was genuinely surprised by his own carelessness.  Once he could see the danger for himself, and how closely he’d come to it, he finally understood why I had been telling him repeatedly that he should let me lead and at last, he obediently walked behind me down the rest of the trail.

And as we walked along, I understood again how important it is that some boundaries not be relaxed, and how I must continue to encourage my children to stay within them, even when it would be so much easier to just let them walk in front.  And I thought about how, as God’s children, we like to push against His boundaries, so sure of ourselves and our own wisdom. Like my son, we want to keep God within arms reach, but we really do not like letting Him lead.  We see the trail in front of us that goes in the direction we want to go, but we do not always see what lies beside it.  As a result, we are all children in so many ways, walking among rattlesnakes.
Posted by Lynda at 3:31 PM