He Will Not Win

It’s raining, a far cry from where we were this time last year, when our 41-day drought finally ended.  I had said my rosary daily during that dry period, desperately praying for only enough rain to keep our fall garden alive, while watching my broccoli plants, kale, collard greens, and arugala shrivel up and turn brown.   And in the end, our Blessed Mother heard me; our good Lord sent the rain and we were eating freshly picked broccoli for Christmas.  God always gives enough.

This week, on October 13, we will be celebrating 19 years of matrimony.  It has been a hard-earned 19 years.  I do not write much about marriage, mostly because I don’t feel like I’m very good at being married.  I also don’t write often about parenting because I don’t feel like I’m very good at that, either.  If, by their fruits, you will know them, then both my marriage and parenting skills leave a lot to be desired, because the fruits of both are sparse and sometimes pretty rotten.  So often, I think God has picked the wrong person to tend this vineyard that I call my family.

Of course, that is the devil talking.  My feelings, my judgement of myself, my perspective, mean very little in God’s eyes, especially when being obscured by self-doubt and self-pity.  How much time have I spent reflecting upon my own desire for a different kind of husband, different kinds of children?  Too much.  Much, too much.

It was a moment of revelation that showed me how close I was to losing it all.  My husband packed his suitcase and I could see in his eyes that it was no joke.  Adding to the stress, our autistic son had kicked another hole in the wall, broken the door of our heirloom hutch, and was threatening to hurt his father in yet another fit of unexplainable rage that was becoming almost a daily occurrence.  There were late night arguments, too much yelling, too much judging, too much blaming, and too much bullying.  A demonic atmosphere began to take hold in the home, and every moment of peace or attempt to pray was being disrupted.  The perfect storm was brewing and we were all spinning in its vortex.

That’s when I began the 54-day rosary novena.  I prayed it every day, desperately.  And things got worse.  I kept praying, and things got even worse.  I got worse.  The temptation to yell, rant, and fall into self-pity became stronger, and the opportunities to do so became more frequent. I struggled to resist the urge to give into my bad habits.  I encouraged my husband to go on a much-needed get-a-way that lasted 14 days. We both needed to re-set. Staying home with the kids, one of whom was very dysregulated, would be a sacrifice that I could offer up to Jesus with the intention that He heal my marriage. I was determined to stay in the spiritual battle and fight my true Enemy, who I was beginning to realize was not my family.  I added fasting to my battle plan and centered my thoughts on one word, humility, the supreme virtue from which all other virtues come.

With each day of reflection upon this virtue, I became more and more aware that my lack of humility was the means by which I was allowing the Enemy to tear apart my family and allowing me to fall into sinful behaviors.  The intense desire to be loved and feel validated was my idol, and I would stop at nothing to protect it.  “I only need reassurance,” I would plead with my husband, even after he’d try to express an apology that I felt just wasn’t “good enough”.  “Why did God give me such terrible kids?” I often moaned in self-pity, completely overlooking the blessing that I had in each of these children I’d prayed so long for.

I began saying the Litany of Humility and it left a bad taste in my mouth.  How could I truly desire such things?  Don't I deserve to be loved? Deserve to be wanted, honored, praised for doing good, acknowledged for being right?  The more I thought and prayed about it, the more I came to realize that I've spent my most of my life trying to achieve these very things. Now, I found myself praying to be released from them.  It was, and is, very uncomfortable.

Sadly, for too long, I have been focused more on receiving love than giving it.  Oh yes, I have done countless small deeds with what appeared to be great love, but it was not true love, because I was not practicing true humility.  My small deeds, when not returned with affirmation or validation, particularly from those closest to me, rapidly turned into the seeds of contempt that, over time, caused my vineyard to be overtaken by weeds and not bountiful fruit.

It has been a rocky road, these past 54 days, and these past 19 years.  My husband returned from his 14 days away, renewed and ready to try again, but the Enemy came after us harder a few days later, and we (I) gave in to our old behaviors.  In the midst of that, I read this past week’s Gospel reading, in which Jesus made it loud and clear to me, saying:

“When an unclean spirit goes out of someone, it roams through arid regions searching for rest but, finding none, it says, ‘I shall return to my home from which I came.’ But upon returning, it finds it swept clean and put in order. Then it goes and brings back seven other spirits more wicked than itself who move in and dwell there, and the last condition of that man is worse than the first.”  (Luke 11: 24-26)

And that is how it has always been, and always will be.  The battle I must fight for my marriage, my children, my own soul, will never end until my time ends.  I see it clearer now, in part because I have come very near to losing the battle and the Enemy revealed himself to me.  Yet, I have complete trust in Our Lady and her Fatima promise, and I know that if armed with the Most Holy Rosary and the virtue of humility, he will not win. 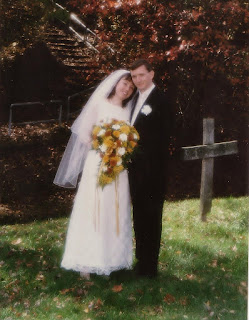 Our Lady, Virgin Most Powerful, pray for us.