Pleasure Without The Pain

The morning sun was warm on my face this morning as I stepped outside.  I should have been deer hunting, considering the mornings that are above freezing during a November deer season are few and far between. Yet, as much as I love watching the sun come up and hearing the forest come to life, I also hate cold toes and frozen fingers.  This morning, I could have had the pleasure without the pain.  But instead, I slept in, thinking only about the pain I was escaping instead of the joy I may have been missing.

Novembers in Appalachia usually go in one of two directions climatologically.  Some years, we have days upon days of cold, cloudy, wet weather with gray trees silhouetted by gray skies.  Other years, we have starry mornings, bright blue skies and days upon days of sunshine.  There usually is no middle ground in an Appalachian November; the days are either extremely depressing or incredibly uplifting.  Perhaps it is in God’s mercy that he chose to give us the latter for 2020.

The kids and I have made the most of these extended Indian summer days.  We’ve taken up a new hobby:  mountain biking.  Yesterday, we biked almost 10 miles, half on trails and half on roads.  The week before that, we did 8 miles on backroads through the forest, and the week before that, 4 miles to the river and back.  Other than a few “Oh s#$%” moments and an aching tailbone at the end of the day, it has been glorious.  I had forgotten what it felt like as a child to climb on a bike and race down the road, wind in my face, feeling like I was escaping the confines of my home and the reality of my world.  How ironic that as a 51-year old housewife, I still feel the same.

On each of our rides, we inevitably pass a cemetery or two.   Appalachian forests are full of cemeteries.  I was pleased with my boys when, without prompting, they stopped their bikes at each cemetery to offer a prayer for the dead.  Earlier in the month, we spent All Souls' Day making a pilgrimage to five cemeteries, saying a decade of the rosary at each.  The kids made gravestone rubbings and recorded the names of whomever they felt led by the Holy Spirit to pray for.  When we returned home that evening, we wrote those names on our Remembrance Candle and have lit it each night as we prayed for all those on it. Since that day, we’ve written the names of three more friends on that candle who have passed on to eternal life since the month began.  I often wonder who’s name will be next.  If 2020 has made me aware of anything, it is that.

I made my weekly run to the grocery store this morning as I do most Saturday mornings.  The store was already crowded, despite it being only 8:30 a.m.   Old ladies were buying frozen pie crusts, one young couple was debating about the size of turkey to buy, and the onion and yam kiosk overflowed to capacity.  As I scanned my groceries at the self-checkout, I chatted with the employee who is there every Saturday and knows my routine.  We know each other by name now, and always enjoy making small talk.  Today, she told me that it was on Thanksgiving Day last year that her husband went to the hospital and I saw her eyes fall.  I did not ask any questions.  I already knew that today, she is a widow.

I took the mac n cheese, Vienna sausages and tuna fish that I’d bought at the grocery and dropped them off at the Blessing Box.  Noticing that someone had left trash around the base of the statue of the Blessed Mother nearby, I walked over to her and picked it up.  The sun was even warmer now, and when I stopped to remove my jacket, I noticed a middle-aged lady in a motorized wheelchair had already spotted me placing food in the Blessing Box and was approaching it.  I smiled at her and waved and I suppose she smiled back behind the mask she was wearing.  I finished cleaning up around the statue and noticed that people had been putting small stones around our Blessed Mother’s feet.  As I prepared to leave, I checked the Blessing Box and it was already empty again.

And now, I sit in our local library, mandatory mask on my face, typing quietly in the corner.  The ladies at the front desk discuss the people they know who have COVID-19 and I think about my own friend who often hikes with me on Saturday mornings, but today, is in quarantine on this lovely weekend.  Sitting here, I look at the periodicals in the magazine rack:  TIME magazine has a cover photo of Biden and Harris with the headline “Time to Heal”;  National Geographic proclaims “A World Gone Viral”, Working Mother magazine asks the question “Now What?” and Liberty magazine ponders “The Collapse of Liberal Democracy?”  Next to the magazines stand three large racks of paperback novels, all with broken spines and worn-out covers, evidence that they are clearly the most-read books in the entire library.  They are divided into two major categories:  romance novels on two racks, westerns on the other.  Escapism for each gender.

After this, I’ll return home.  We are making a brisket for supper and inviting a family to join us.  They, like us, homeschool, and share much of our philosophy, not to mention a love of good BBQ. This past summer, they spent most of their time hiking the Appalachian Trail.  When not hiking, they were camping near the trail, performing “trail magic” for other hikers, which basically means, meeting long-distance hikers along the trail and providing them with hot meals and snacks, shuttles and friendly and encouraging conversation. He’s a military veteran who speaks his mind but makes a lot of sense.  He has already been suspended on social media twice, or maybe it’s three times now.  I’m starting to lose count.  He and his wife are pretty sure their family had COVID-19 last month but did not get tested.  They isolated and rode it out, like most of us will have to do.

So, I will head home and make a cake and some beans to go along with the meat-fest my husband is preparing.  We’ll enjoy sitting in this warm November sunshine and chatting while the kids do flips on the trampoline and race bikes.  A friend told me that we should never have gotten that trampoline, by the way, because they are so dangerous.  She’ll never let her daughter on one, she said.  I don’t doubt she’s right.  And yesterday, flying down the hill on that mountain bike, I saw myself for a second heading to the ER, or one of my kids.  Heck, we’ve already spent most of 2020 nursing my son’s broken elbow, thanks to a bike accident he had in late April.   But I doubt my friend has ever done a flip on the trampoline or flown down a hill on her bike. "Couch potatoes are the new heroes of 2020" was a headline I saw this past week.

Today is supposed to be the last warm and sunny day we have for a while.  This week will bring cloudy skies and rain.  Deer gun season will end this coming weekend, and the Christmas music will start playing in the stores.   I don’t expect I’ll be able to get another bike ride in with the boys for quite some time now, maybe not until spring.  I fear it will be a long winter, once it finally arrives. 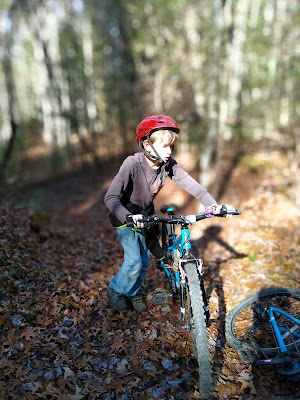