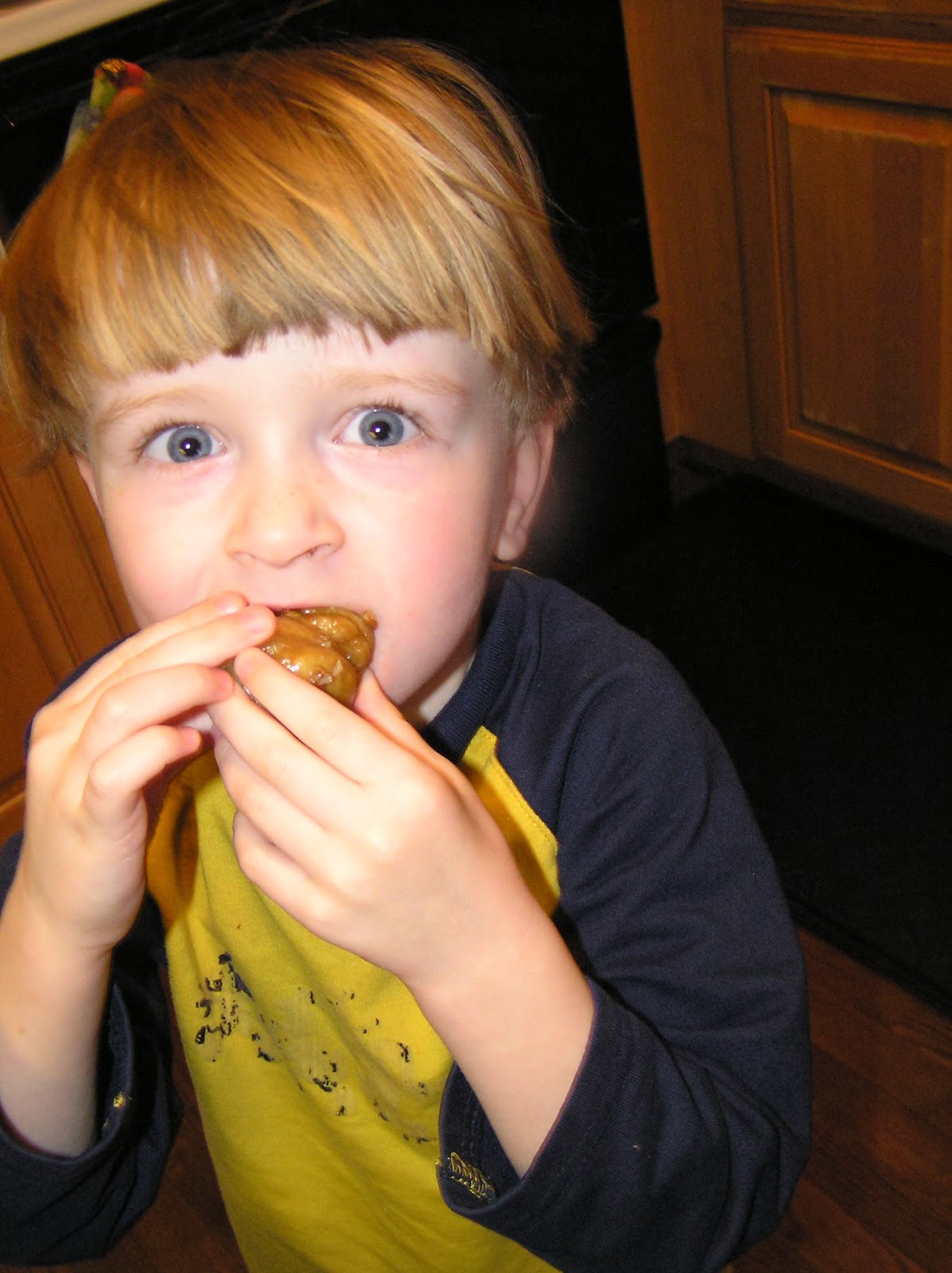 Sitting on the front porch at the moment, watching the boys peddle their little legs off on their trikes.  For the first time in months, they aren't forced to turn their trikes into snow plows and they are totally loving the freedom that being unencumbered by snow has given them.   I'm pretty sure Joah just hit 32 mph on his.

This past Sunday was another freeze-the-nose-hairs kinda day, so the current 50 degrees feels downright tropical.  Even though last Sunday was another day to forget weather-wise, I really did enjoy having a "down day" at home.   Tom did 95% of the kid-watching, and 98% of the cooking, and 100% of the dish-washing so I was left with only 7%  responsibility which means I got about 1% of anything accomplished.  I did make some sticky cinnamon buns for the guys, mostly to relieve myself of any guilt I was feeling from being 94% useless that day.

Anyhow, that's my first quick take, which I now realize was about a whole bunch of nothin' . 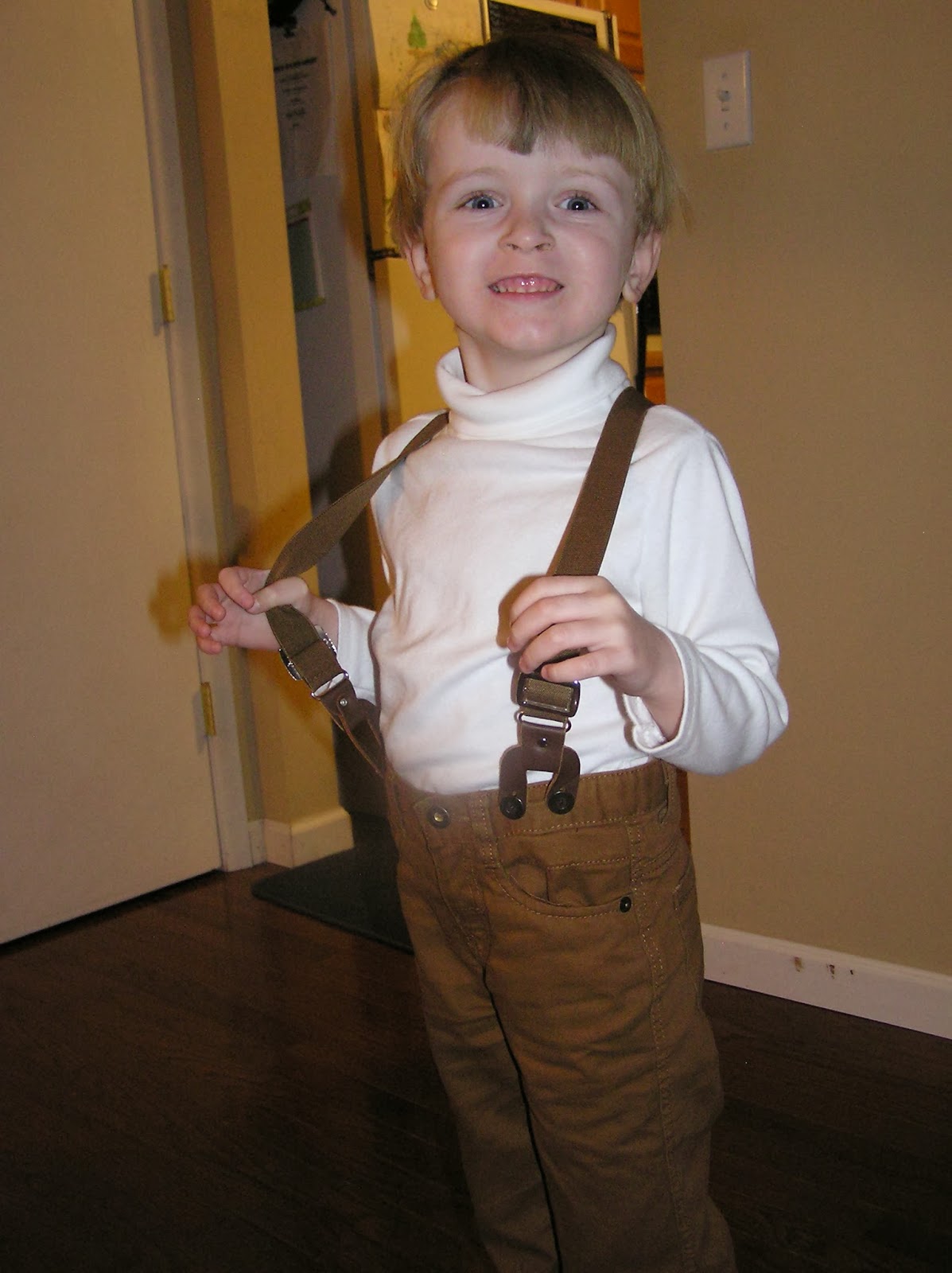 Moving on.  Tom made it back from his Utah trip without drama which is always noteworthy when flying any of the major airlines these days.    While gone, he spent a little of his down time shopping for something for the boys and me and came home with these super cute suspender pants for John.   They go perfectly with his haircut that also matches what all the Amish boys are  sporting these days.    Now we just need to find a hat.   And horse.


-3-
Fat Tuesday around here was also the day after our little Isaac Anne's birth day one year ago.   I combined the two and made a chocolate cake that was a favored recipe of Tom's grandmother. Then I put a very fudgey icing on it which made it appropriate for Fat Tuesday because between the cake and the frosting, there were not one, not two, but three sticks of butter involved!   Paula Deen would be proud.  And so would Grandma June, I think.   We popped a candle on top and sang happy birthday to Isaac Anne while the boys blew it out. 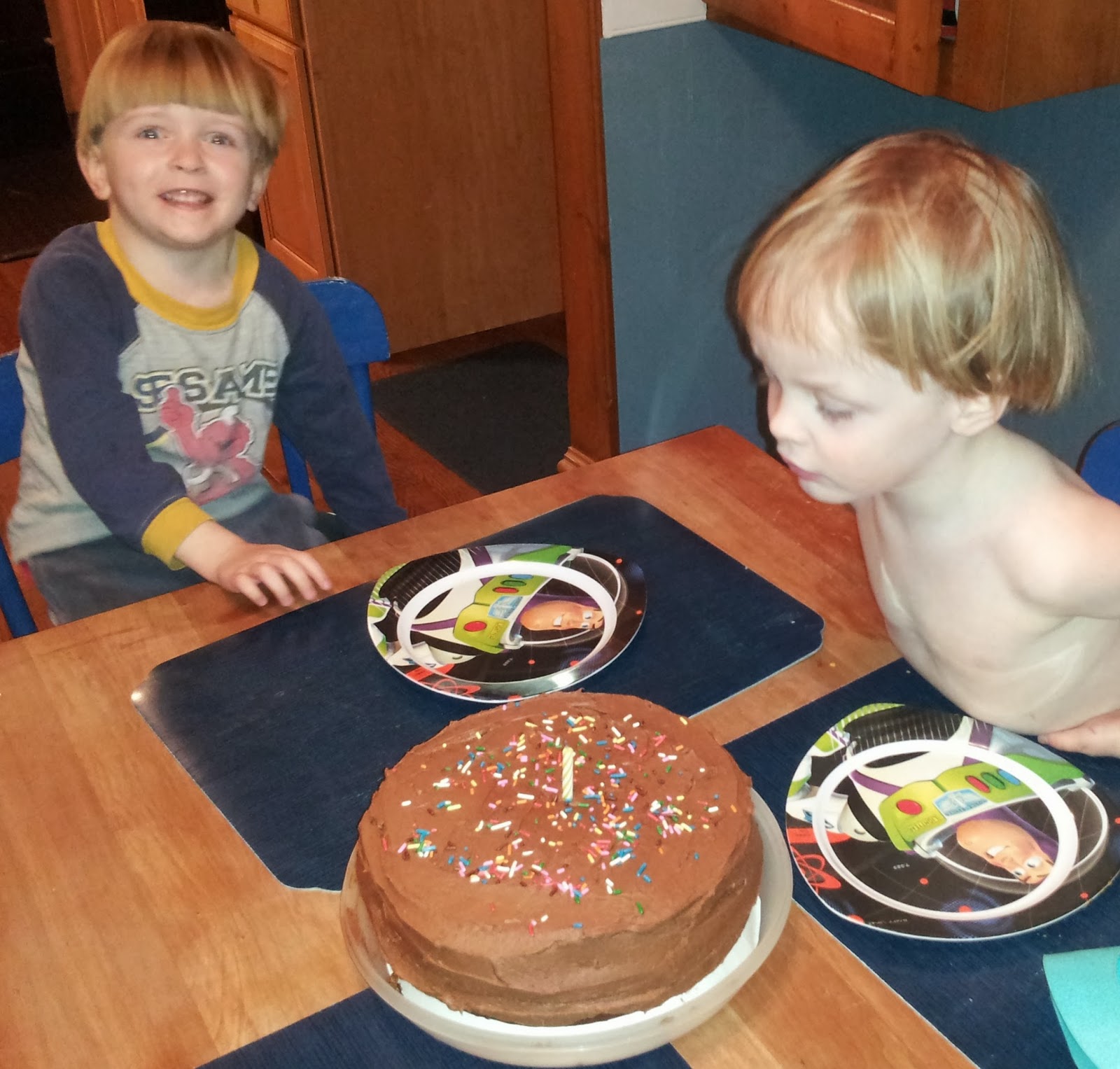 The next day,we took flowers to Isaac Anne's grave and did it all again (the happy birthday song, that is).   I'm pretty sure that Grandma June and Isaac Anne were smiling as they watched us from their side of heaven. 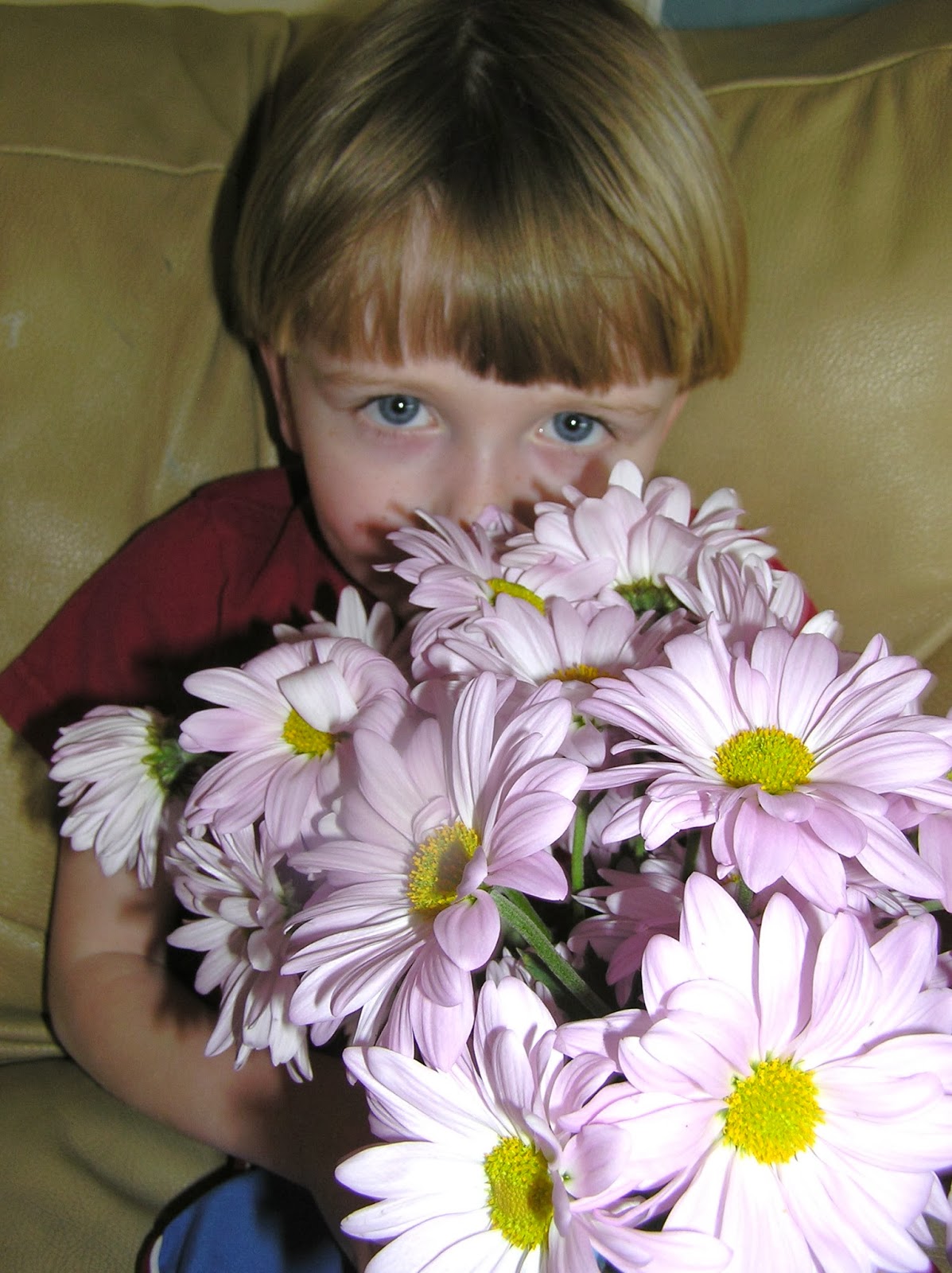 -4-
Of course, the next day was Ash Wednesday.   Giving up meat around here is no big deal for us since we do meatless Fridays year-round and usually one other day meatless each week (however, I don't know how Joah will survive once he is no longer excused by age because he can't seem to get off go each morning unless he has his Jimmy Dean fix).   But not snacking between meals?  That is a whole other ball game for this Mamma who survives by grazing all day.     So, I made a deliberate effort to cluster my raisins, toast, egg, Cheez-its, avocado and kiwi into two 10-minute sessions.   And then Tom came home and returned us to a balanced diet by making salmon and broccoli for dinner.

The boys helped me pick "forn" (thorn) branches for home decor and we placed them on the mantle and replaced the flowers around the statue of the Blessed Mother with them as we talked about "Went" (Lent).   John gets it, sorta.   When he is refused a piece of chocolate cake, he'll say "because it's Went!"  Anyway, it's a start.

Lent for me personally is always difficult because it brings back so many reminders of the when we lost our two babies, Karol and Isaac.   One was lost in Lent 2012 and the other during Lent 2013.   This year, Lent 2014 looks like it will be the year we realize our dream of adopting again will not be fulfilled, as our home study expires at the end of March and then we will be re-locating to another state where the process, if we choose to do it, must be started all over again.   So, in a way, it feels like we are losing another baby.    It is amazing to me how cyclic and circular my life seems to be from year to year.   So, this Lent, I will be offering special intentions for anyone going through the struggle of infertility or failed adoptions or miscarriage.   As I will be posting each week during this Lent, we all go through personal periods of "Lent" in our own lives and this decade of infertility/subfertility has been mine. 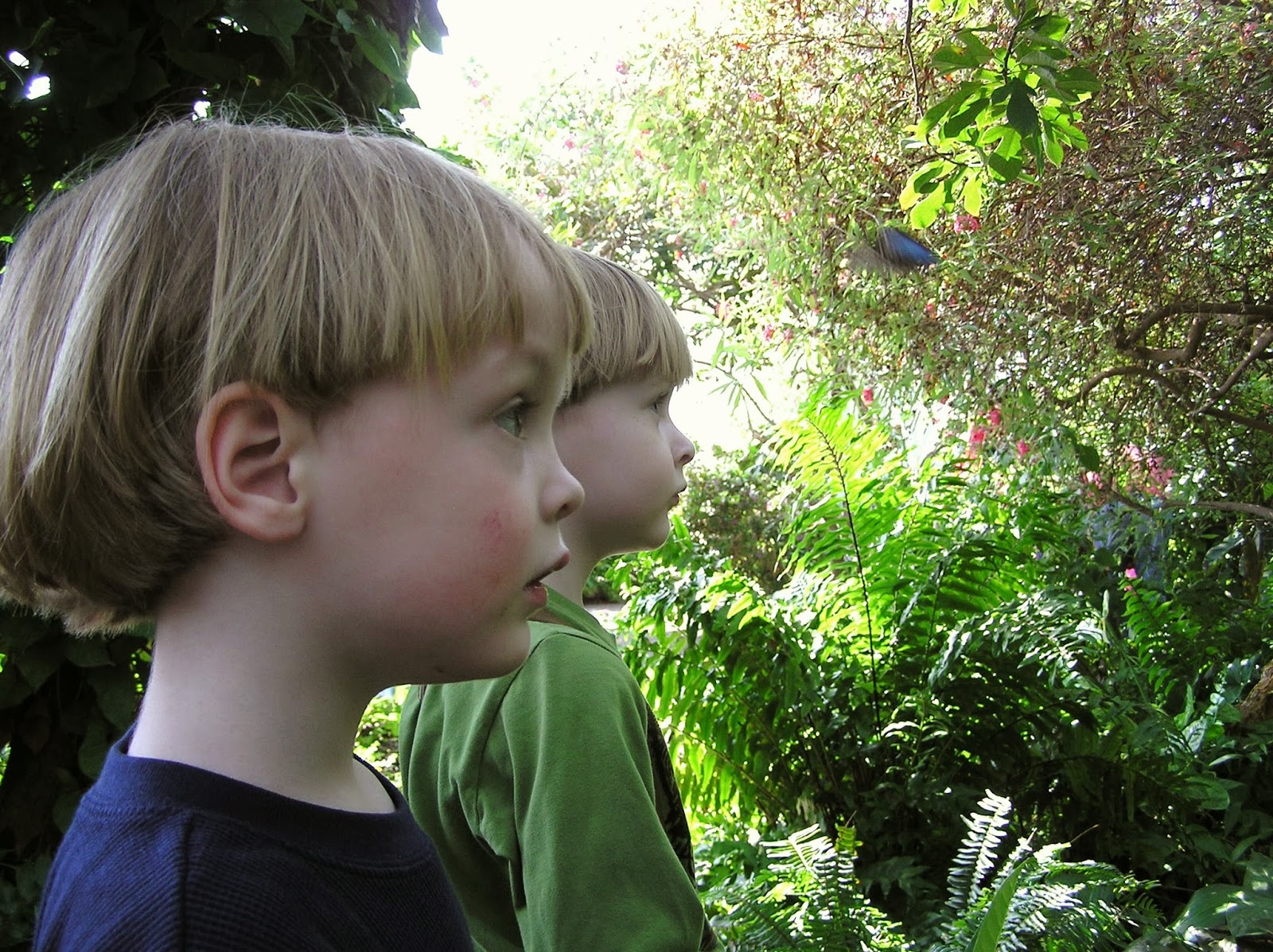 On a lighter note, John has been asking almost daily if we could go to the "Bufferfly House"...this is his all time favorite place to go.   I first took him and Joah when they were only a year-old and they were immediately mesmerized by all the butterflies floating around them.   I kept telling John we would go when the snow melted and he has been anxiously watching the gradual receding snow line in our front yard.   He finally got his wish (and mine) and we all made a trip yesterday. It was a great time and they currently have thousands of Blue Morphos in the butterfly house which made it even more dramatic.   If you have kids and ever get chance to visit, I would definitely encourage it.   Especially in the winter, because there's nothing like walking into an 85-degree atrium filled with orchids and tropical flowers and floating Blue Morphos to make you forget the forty-shades of brown outside.  Plus, there is an indoor carousel right next door, and an outdoor playground too.   So, if you can go, just do it. 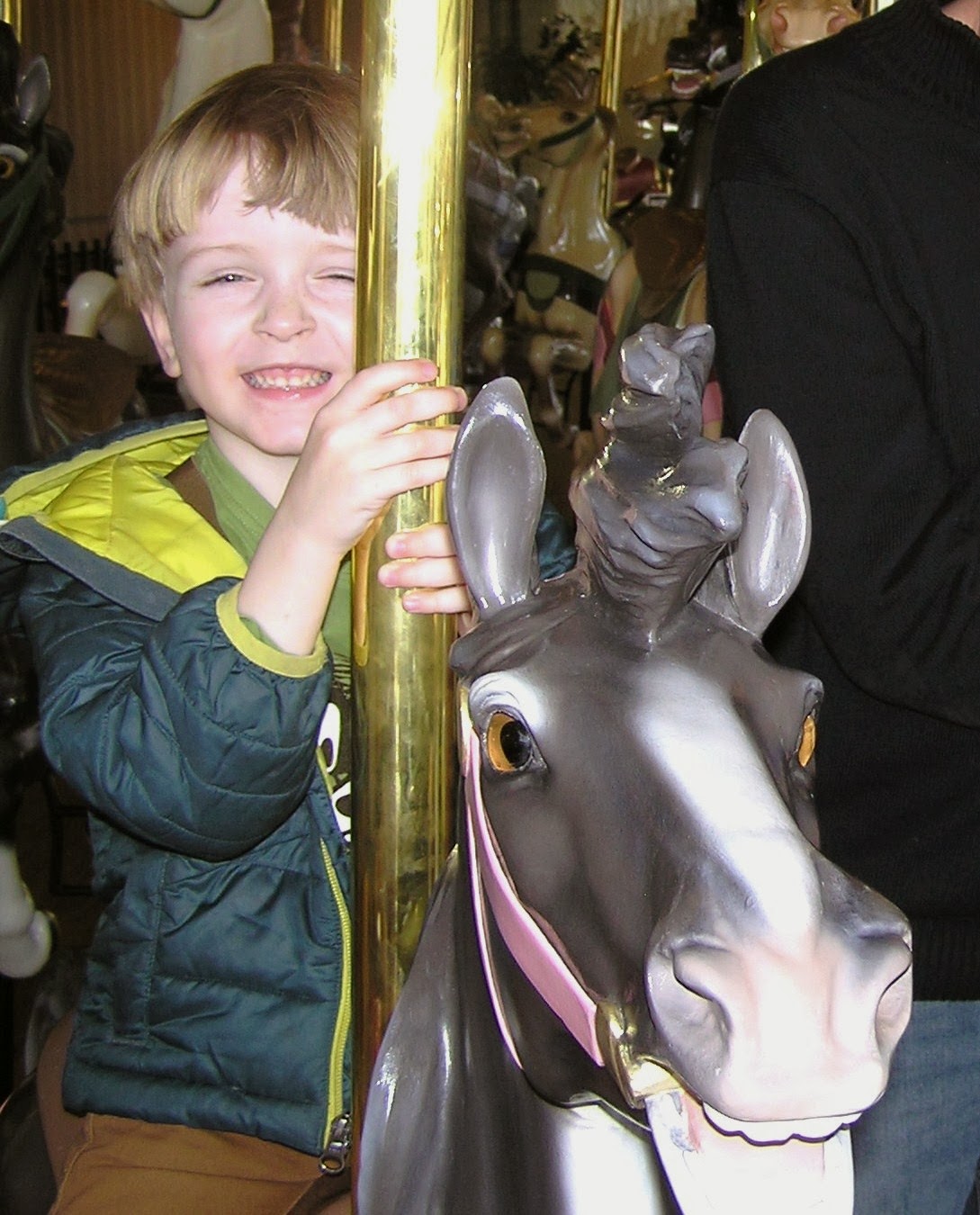 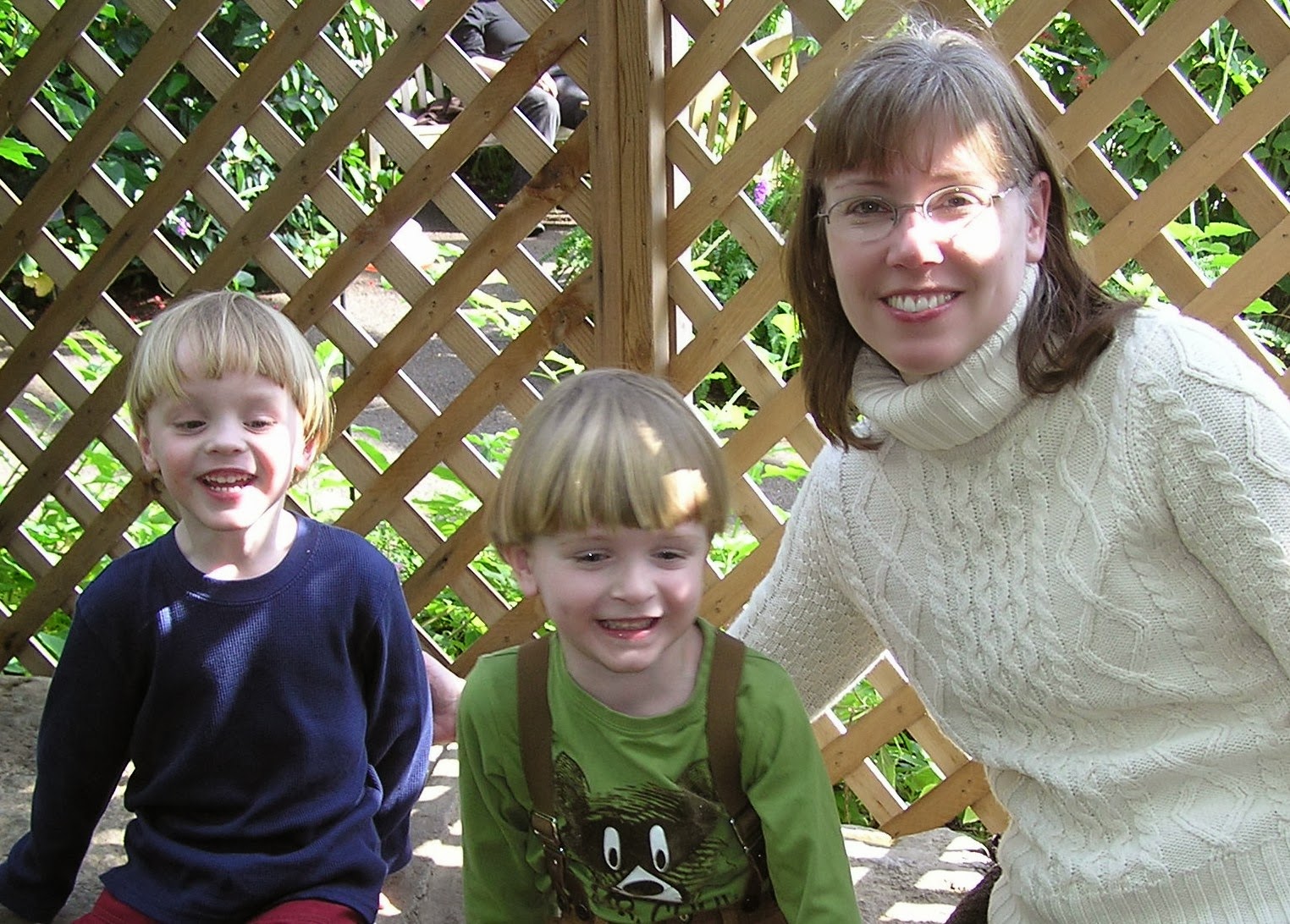 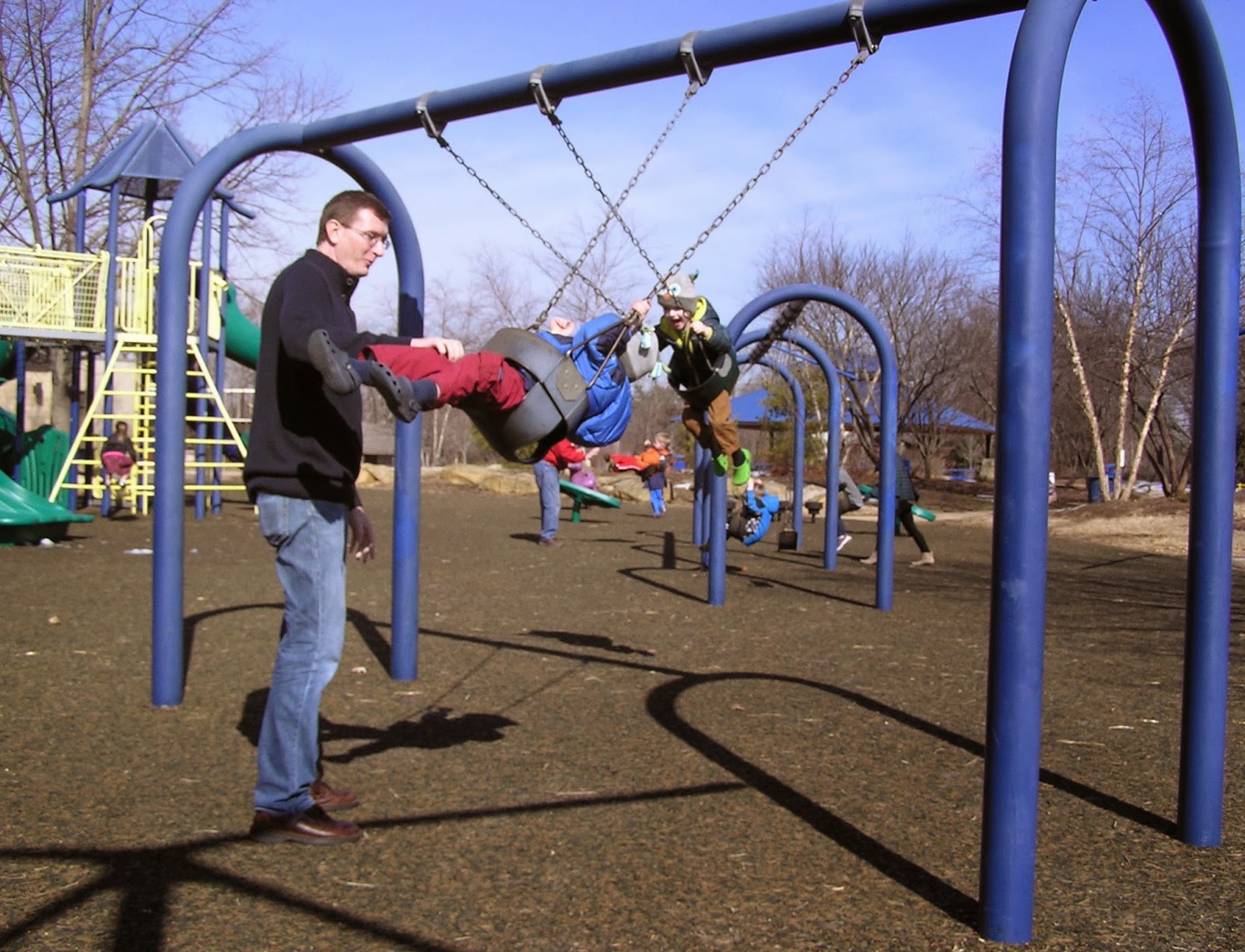 -6-
Because we are down to the wire with the expiration of our adoption home study, Tom and I started a 54-Day Novena and are now on Day 34.   I have to admit, I'm feeling really discouraged, and yesterday didn't help.  While out, we stopped to visit the lawyer who had helped us with Joah's adoption finalization.   He commented that from what he has seen lately, almost all adoptions now are being handled privately and not through adoption agencies, thanks to social media.   Since Tom and I are doing it the "old fashioned" way by working with an agency, it makes it less likely that we will be placed with a baby.   Still, I am trying to hold onto a glimmer of hope while also emotionally preparing to accept whatever may come of this latest adoption journey, which I have a feeling is not going to end the way I wanted it to.  Definitely something I will be working on and praying about during this "Went".


-7-
And lastly, I couldn't finish a Quick Take without one more mention of our little woodcock.   You might be able to tell by now that I'm a bit infatuated by these little guys.   Seriously, you won't find a bird with much more personality!   Well, he was here puttin' on the ritz for the gals until our most recent bout of polar vortex and now we haven't seen feather nor flock of the little guy.   I'm really concerned that he might've been done in by the vile vortex.   Or maybe he got smarter than the rest of us are, and headed back south.   We'll be listening for him again tonight so say a prayer for a "peent".

That's about it.   Looks like while I've been typing, the boys have decided to convert their trikes from snow plows to ATVs and are ushering in the Mud Season...ah, joy. 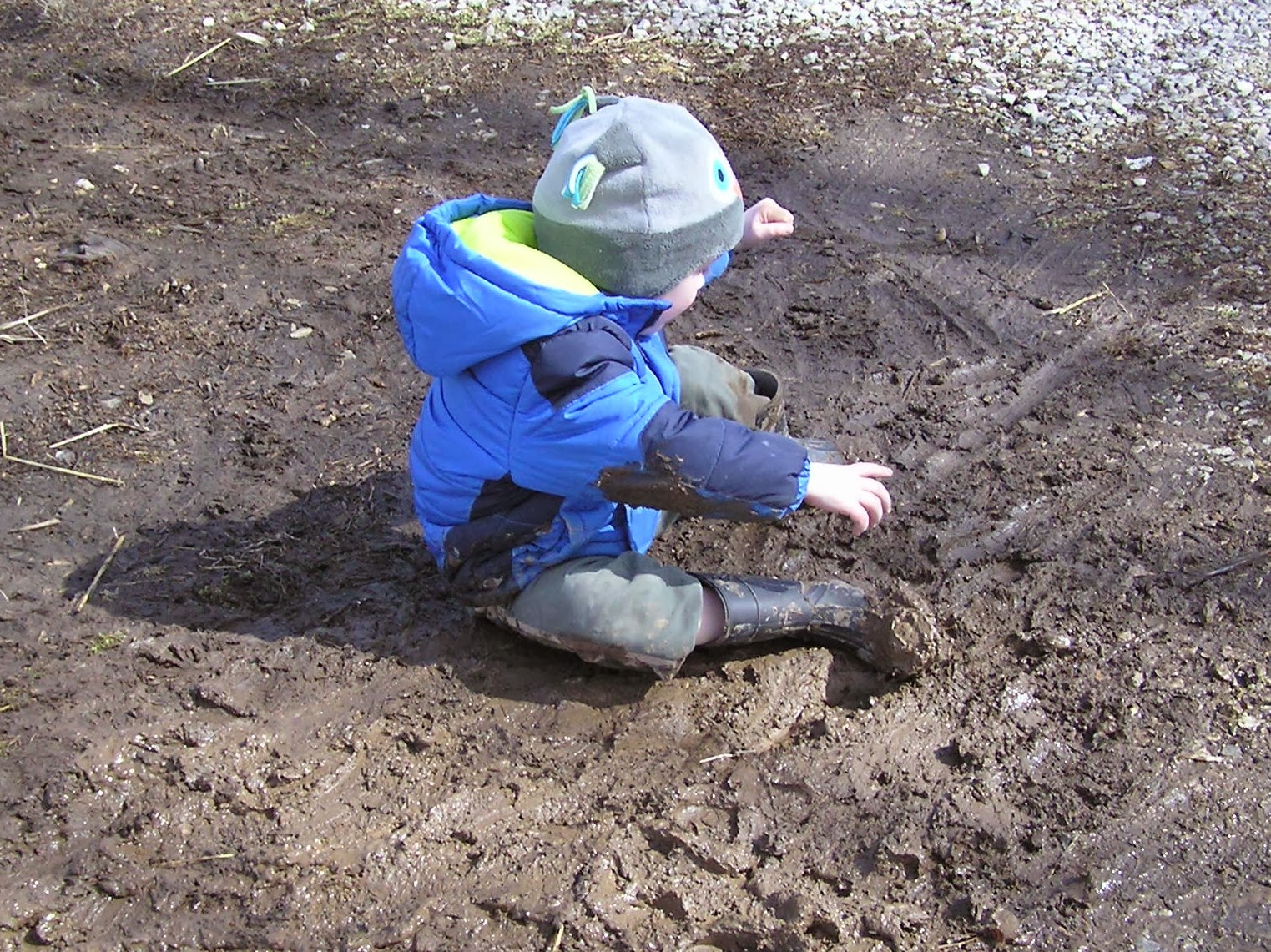 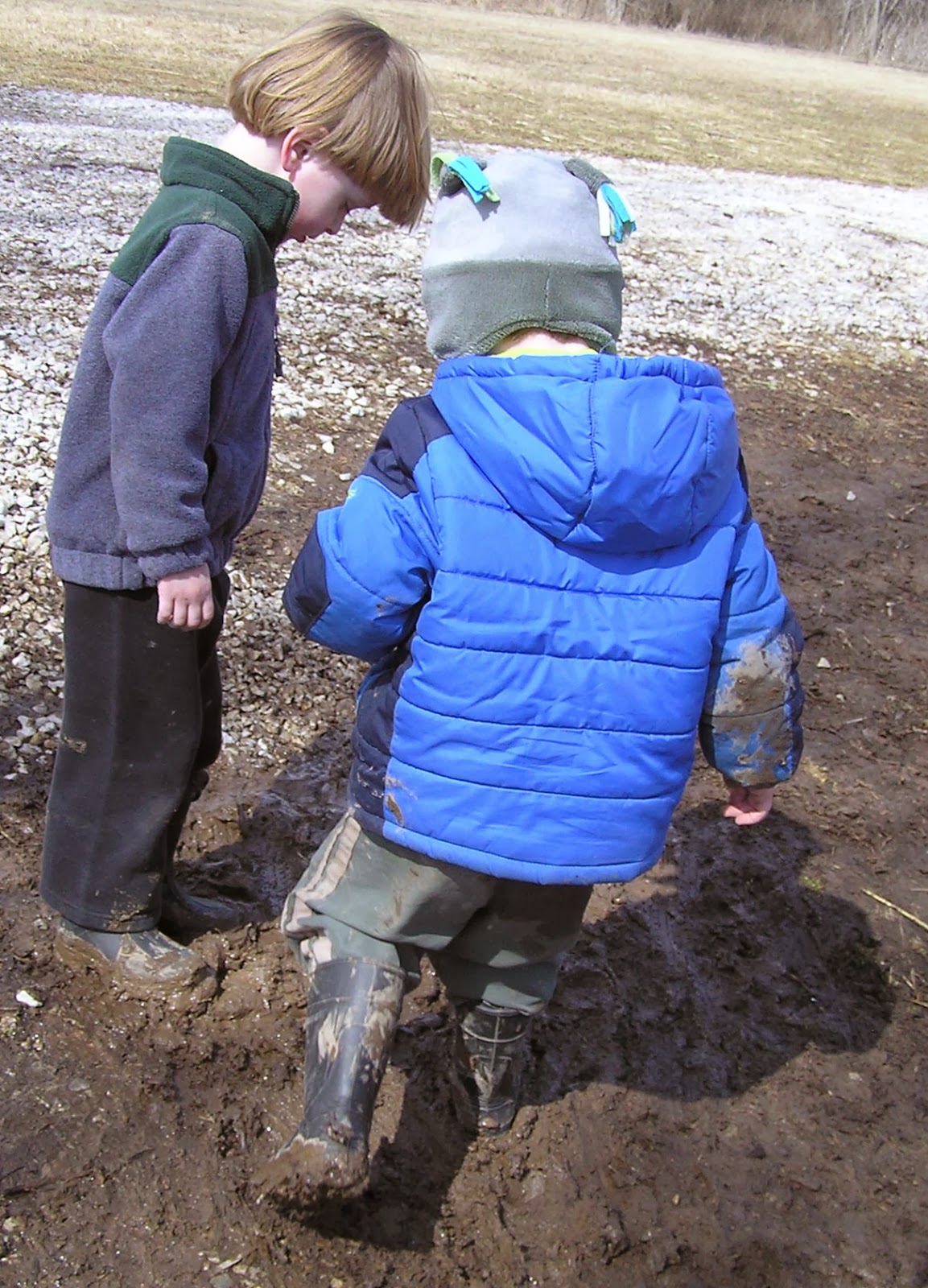 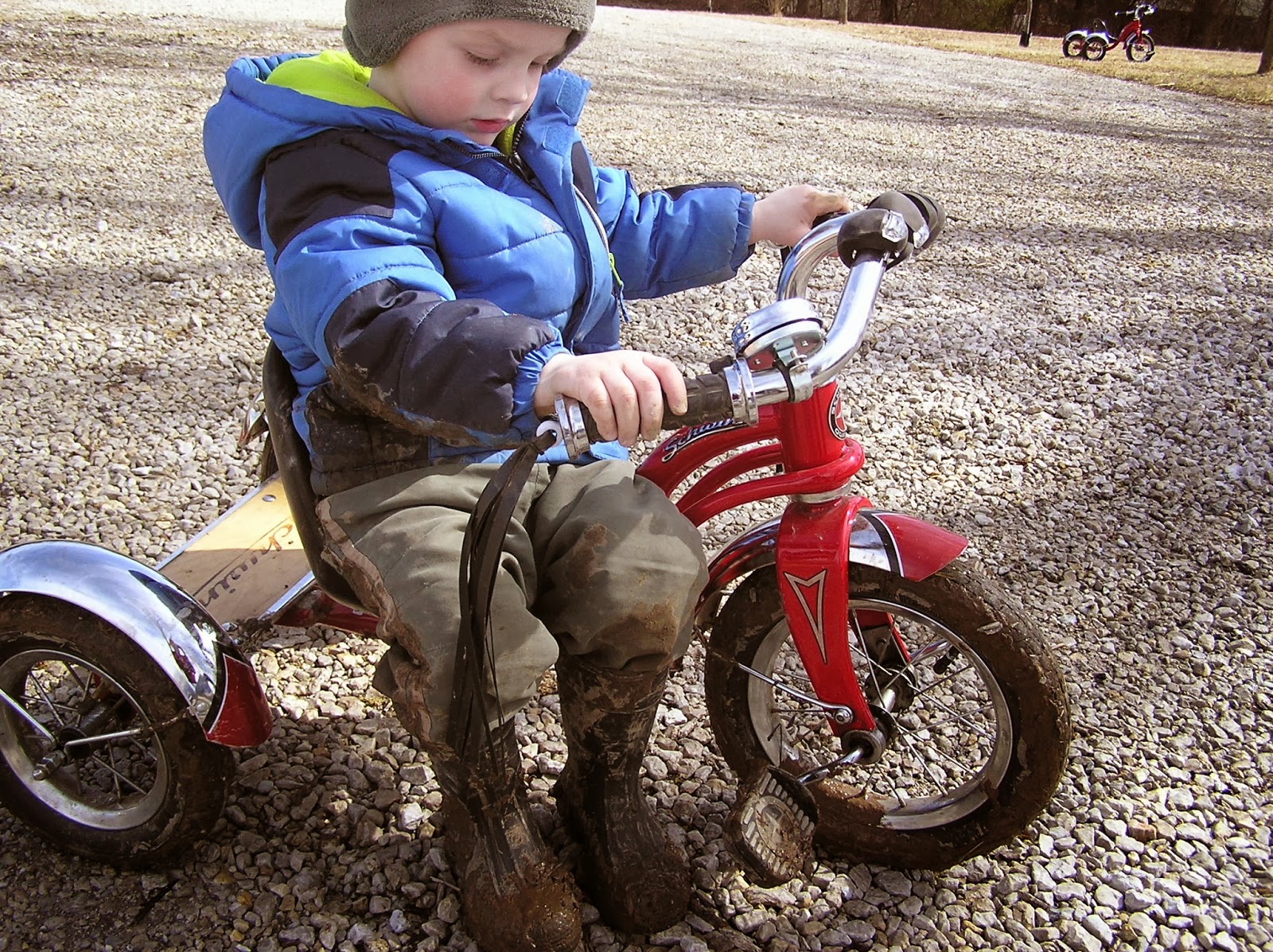 So...have a great weekend and for those of you still in the Snow Belt, may all your snow also soon turn to mud!

Thank you to Jen for hosting.
Posted by Lynda at 3:42 PM