As I mentioned in a previous post, we celebrated Joah's birthday a few weeks ago.   And I had every intention of posting about the grand event within a few days of its occurrence because, even tho I'm a novice at this blogging stuff, I am under the impression that "timeliness" might be a key factor to success?   Something else I am obviously going to need to work on considering the fact that the birthday event went down almost 3 weeks ago.  So, timeliness.   I will add that to my Blogging Skills to Master to-do list, which currently looks like this:

1) be less "wordy"
2) use more pictures
3) figure out how to link to Facebook [I actually tried to tackle Facebook again this past weekend, and is it just me, or is there absolutely nothing intuitive about it?   Anyhow, I think dealing with Facebook will be one of my penances during Lent.]

First, let me just say that the birthday fell on what might've been one of the coldest days of one of the coldest winters on record in St. Louis.   So, what did we plan?   A day outside, of course.  But that is not because we don't know how to interpret a basic 5-day forecast.  After all, they do use pictures in those forecasts and I distinctly remembered seeing a picture of rain coming out of a cloud with sunshine peeking around it.  No, it was because the all-knowing weather forecasters completely missed the forecast. Again.  Completely. What was supposed to be a day of temperatures in the 40s with scattered showers, turned into temperatures in the upper 20s, with wind chills around zero and spitting snow.   Great.

Of course, we didn't realize this would be the case until we'd already arrived at this museum.   We (read: Tom) picked this as a great place to take Joah because he (read: Tom) loves loves loves trains. John and Joah love them too.   Mom?  Hmm, I think this might be why some mothers want daughters.

Upon walking in, the first question I asked the receptionist was "Do you give discounts on bad weather days?"  Seemed like a fair question, considering the fact that it was freezing cold, raining/sleeting, windy, and over half of the museum was an outdoor exhibit.   She gave me her best St. Louis Smile and stated that not only did we have to pay full admission, but for a small additional fee, our boys could also participate in the "Creation Station".   And yes, parents had to pay to enter that, too.   I considered not paying the parent fee, figuring that if we let the boys go in alone, in about 40 seconds, they would be offering to pay us to come supervise them.  But as I was entertaining this thought, Tom handed her the dough and she handed us 4 tickets to all museum amenities.  She then gave us that smile again and indicated that Creation Station would start in approximately 45 minutes and no, they did not have a coat rack.   Enjoy.

That left us with 45 minutes to kill with two three-year-olds in a large open space filled with tables, chairs and glass enclosed exhibits.   Nothing could go wrong.


So after making our contribution to their museum fund, it took us all of 10 minutes to look at the glass-enclosed displays, play with the water fountain, re-arrange the chairs, go potty, and look at the glass-enclosed displays one more time.  Just as I was about to launch into a "this was a total waste of time, money, time and money" tirade, John ran off into a side room and came back saying he'd found a train.  So we followed, and there was a large-scale model train going that kept the boys occupied for almost an entire 30 minutes while I read placards about the history of circus trains (fascinating stuff, actually).  And then we were finally allowed to enter the Creation Station.

Now, up to this point, I was seriously considering asking to see the manager, or superintendent, or whatever you call people who are in charge of train museums, and asking for a partial-refund.  Or at least a raincheck. But upon entering Creation Station, I had a complete change of heart.   For a kid like Joah (or Tom), this room was HEAVEN.   It was filled with dozens of train tables of all sorts, a play kitchen, a small jungle gym, a play house, and even had a very kind-hearted lady overseeing everything and offering to make crafts with the kids. 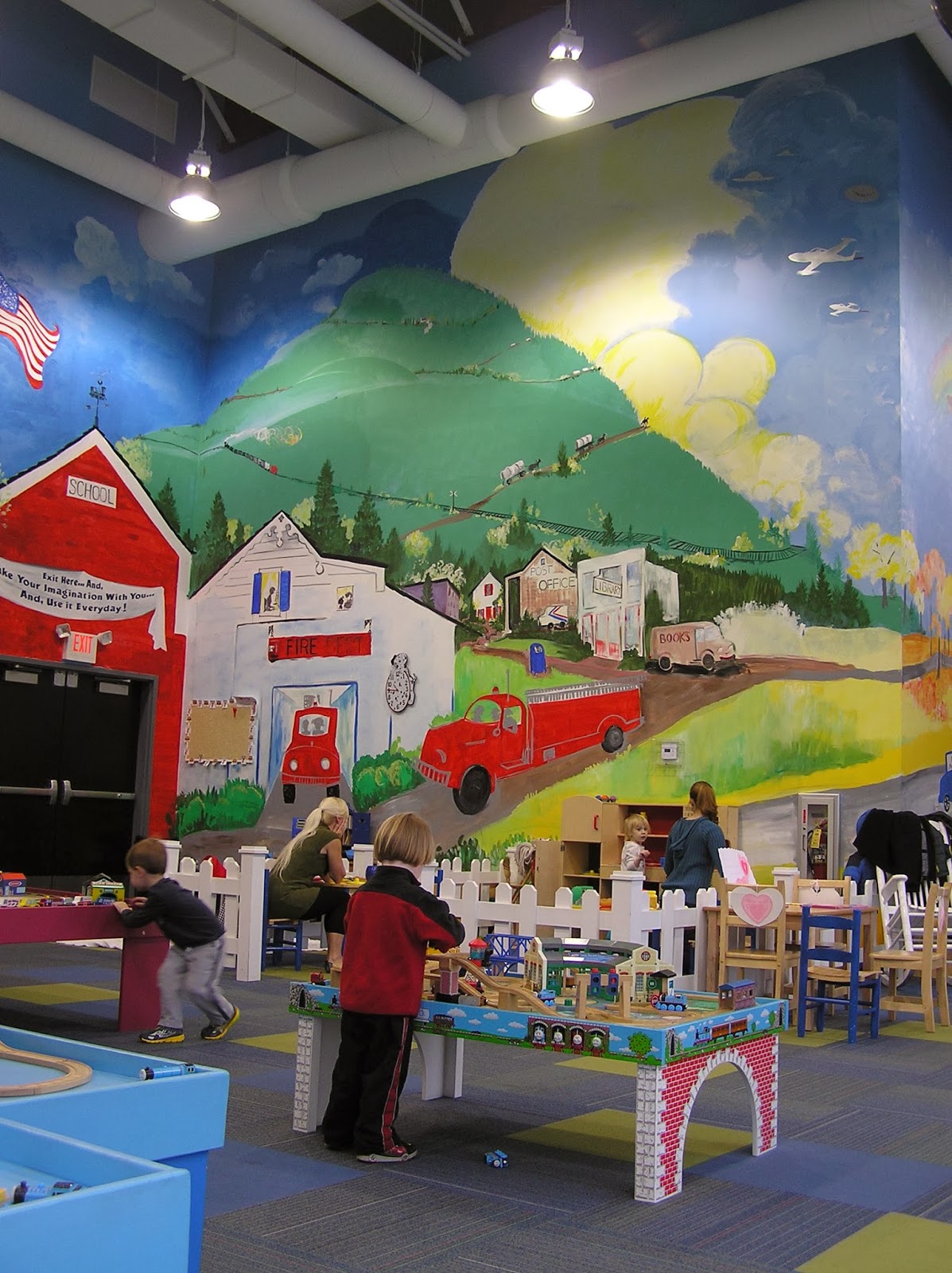 Joah loved it!   For almost an hour, he went from train table to train table and the look on his face was one of complete peace as he became absorbed in the toy trains.  He hooked the trains together, turned the signals off and on, moved the train cars from place to place, and then did it all over again.    Seeing him so calm and content made the trip (and the cost) totally worth it. 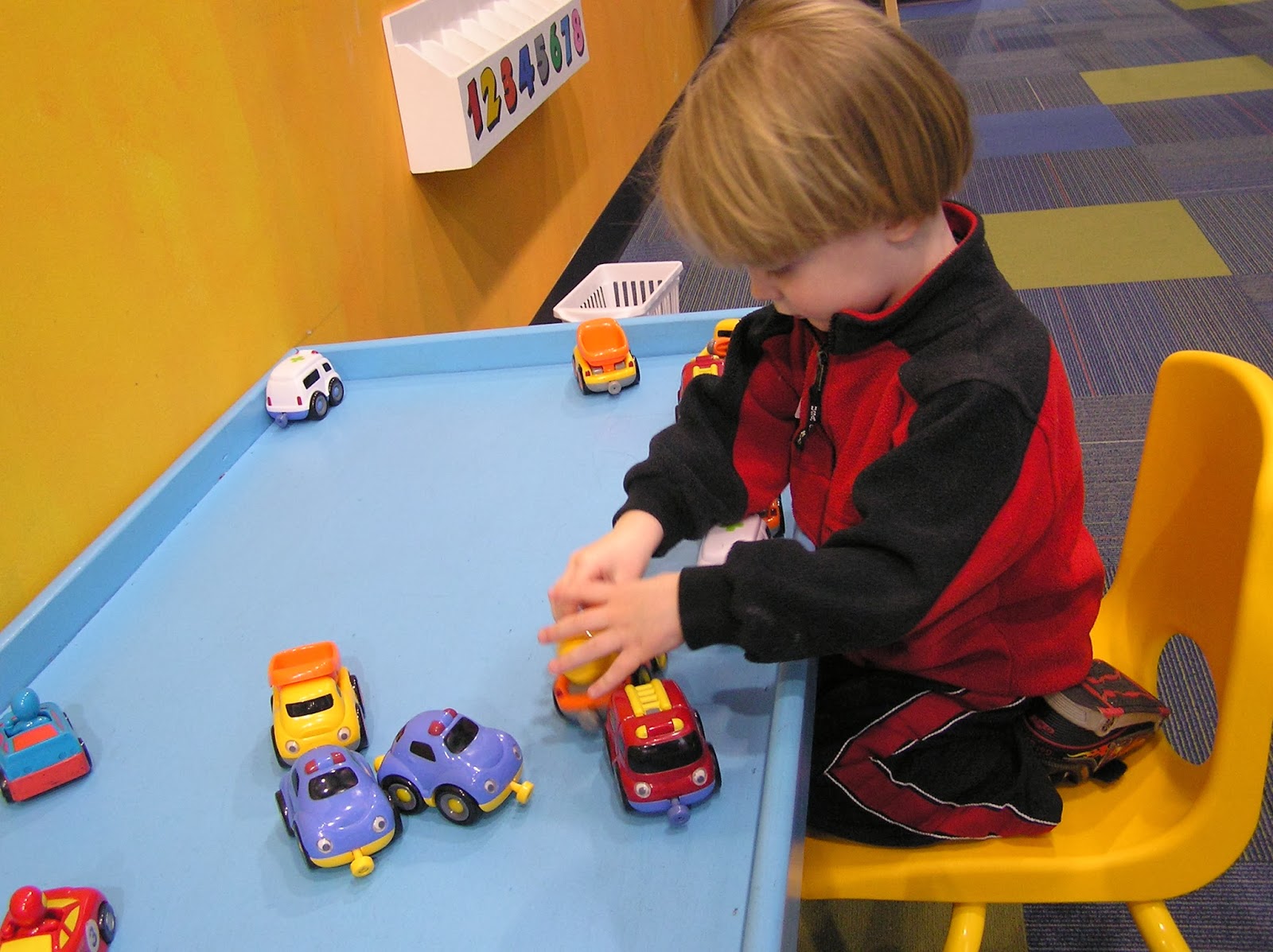 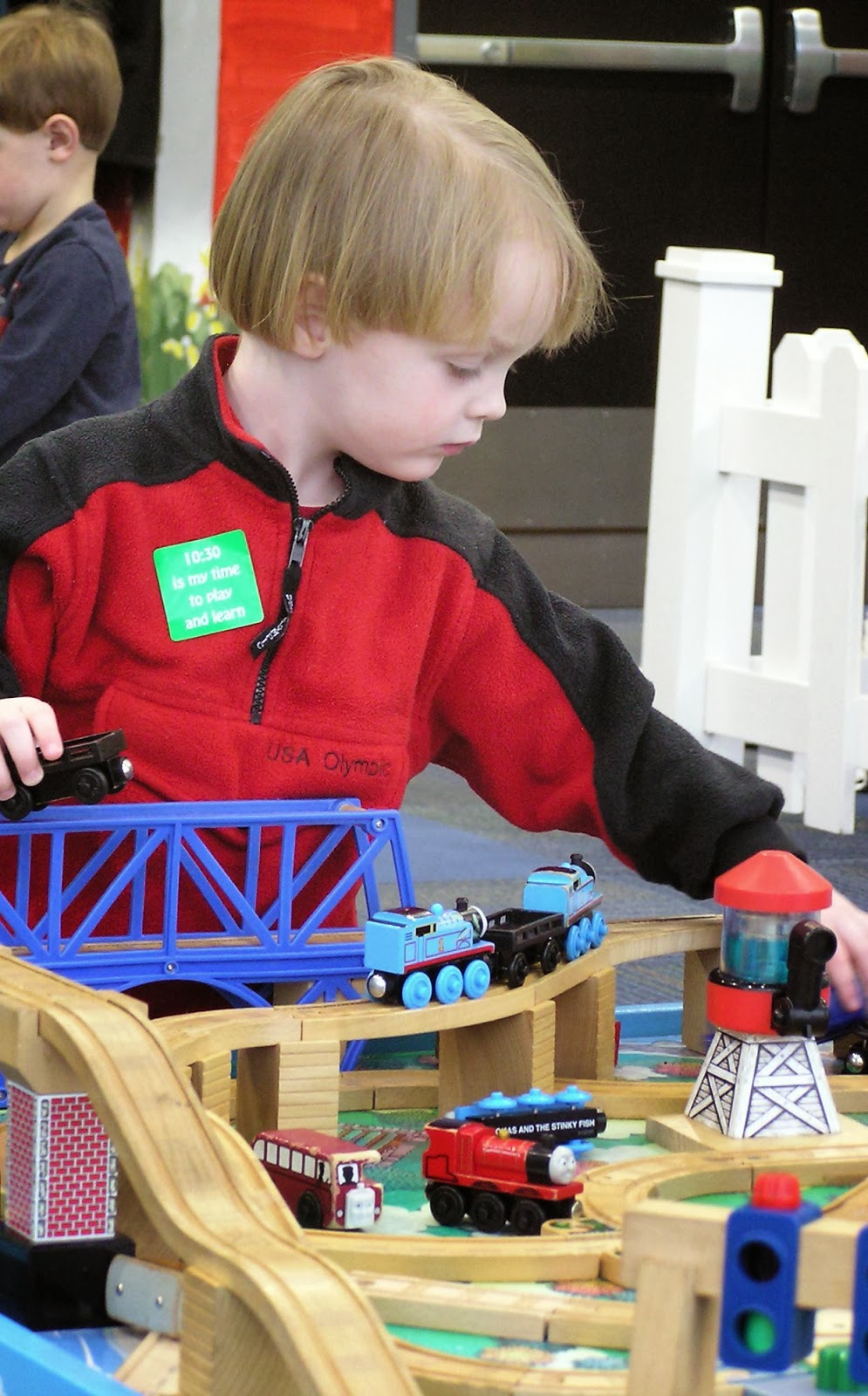 The grandparents (Tom's parents) were at our home waiting for us after our return from the museum and had a little surprise party all ready and waiting when we walked in.    Joah beamed, and John was super excited to see "bawooms" (balloons) hanging from the ceiling fan.

I had asked Joah what kind of birthday cake he wanted a few times and every time I'd asked, he'd said "ice-cream".  I suppose that was his way of trying to tell me he wanted "ice-cream" and not cake, but I decided to take him literally (mostly because it made less work for me) and got him a DQ ice-cream cake.   Needless to say, I didn't have to worry about it melting nor did I have to worry about having extra freezer space because I was able to just put the leftovers on the back porch.   So, if you're like me and and always wanted to buy an ice-cream cake but also like me and are always fighting an overflowing freezer, there's a helpful hint for you...buy your ice-cream cakes when it is freezing outside. Plus, they usually give coupons during the winter. Win. Win. 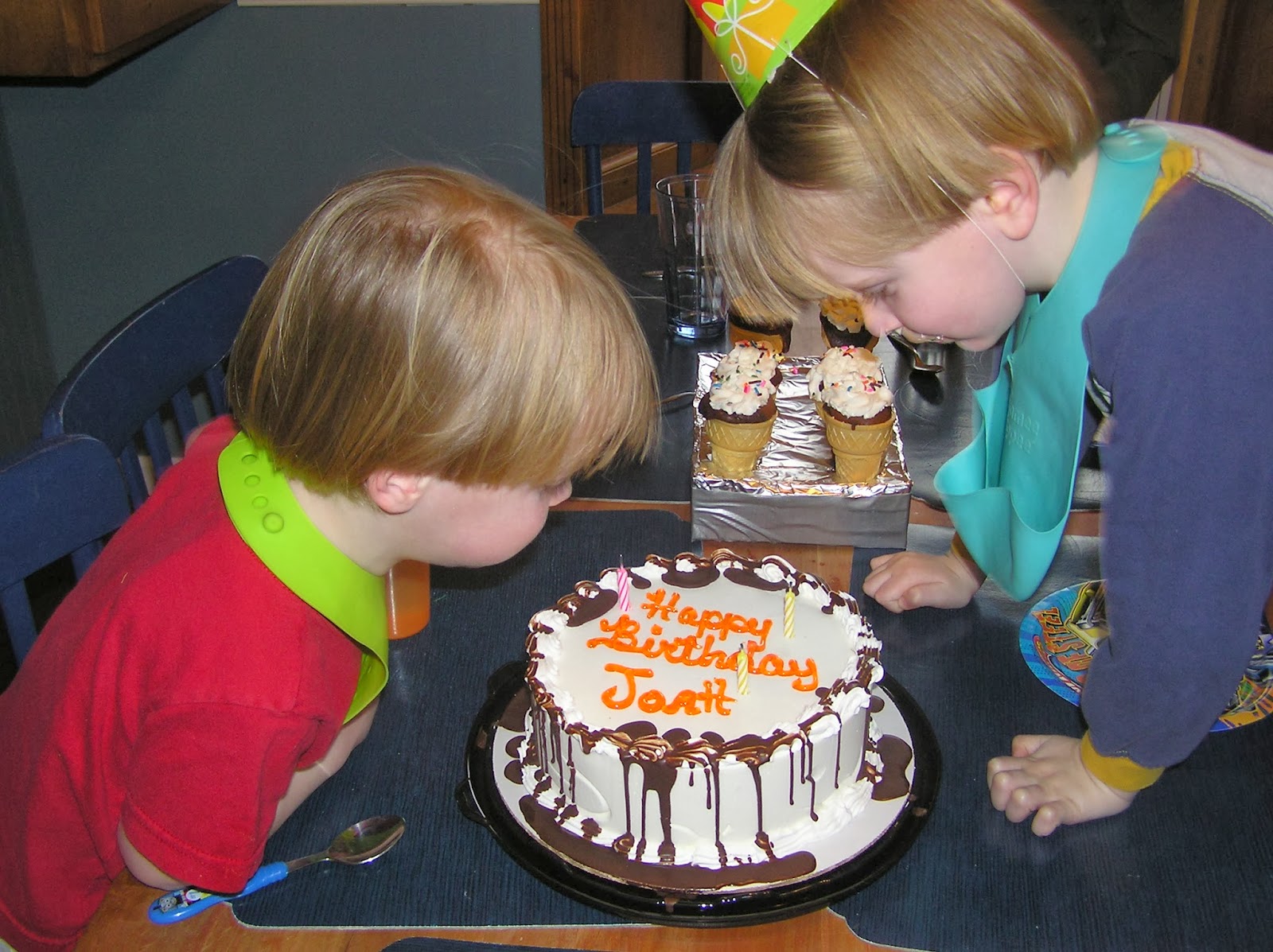 We did have real cake, too.   I made these little ice-cream cone cupcakes to go with the ice-cream cake.   I thought the novelty of having "ice-cream for cake" and "cake for ice-cream" was pretty imaginative, but I'm not sure anyone else was that impressed.    Tom and his folks both commented that they had never seen ice-cream cone cupcakes, and I commented on how much Tom had missed out on by never being in Girl Scouts.


Anyhow, moving on, because I'm trying to avoid the whole "too wordy" trap again....after cake and ice-cream, we opened gifts and played with the bawooms and called it a birthday.  And then Joah completely melted down because long days combined with no naps and lots of sugar end that way.   But the good news is that the ice-cream cake didn't. 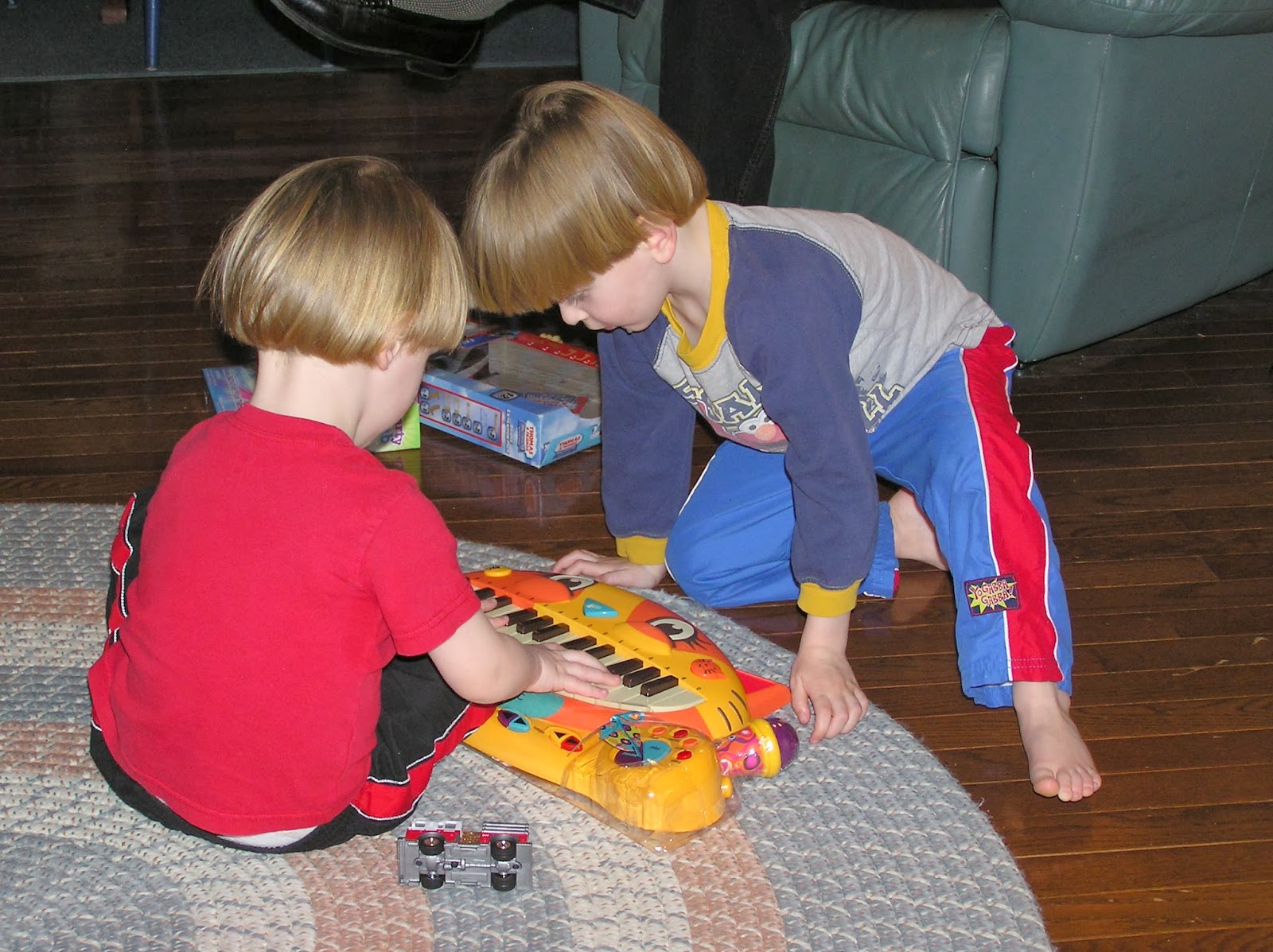 And in case you may be wondering, no, the dog didn't eat the ice-cream cake while it was sitting on the back porch.  Best dog ever.
The End. 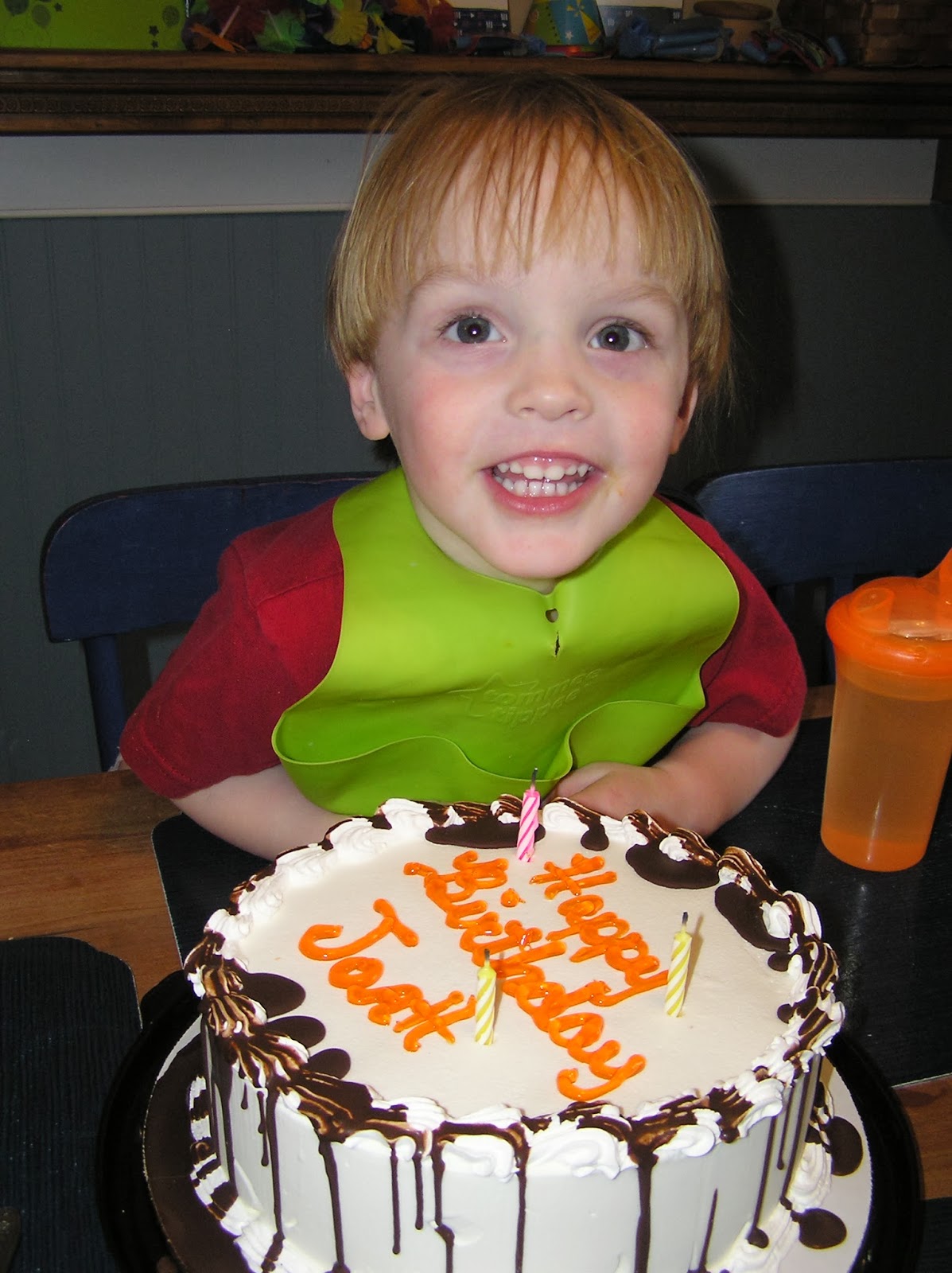