One could argue exactly where the Bible Belt is in America.   Most agree that all southern states are included.  Some would also add the border states such as Missouri and Kentucky.   However, having lived in both Missouri and Kentucky, my experience has been that the term applies well to the southern parts of those states but venture northward and you'll find a much different culture not anything like the true Bible Belt that I am familiar with.  The same could be said for any small town versus large town in the south...that is, small town life in the south is much different than big town life.   So, all in all, if I were to define "Bible Belt", I would limit it to small towns located in rural areas in southern states.   And now that I am once again firmly planted in such, here are a few of the things I love most about living in the Bible Belt of America:


1.  Sundays are really Sundays.   There's a reason why more people in the southern US go to church regularly than anywhere else in the country (not counting Utah).  When you live in the Bible Belt, it's hard to forget what Sundays are meant for.   Here, Sundays are all about church, family, and rest.   In our small town, on Sundays, most people are moving about to go to one of three locations:   their church, to visit their family, or (this time of year) to go fishing.   True, we have a grocery store that is open on Sunday and some of us do make trips there (we need a few things to make Sunday dinner) and yes, there are many who opt to take the family out to a local restaurant in lieu of cooking, but for the most part, people spend time on Sunday the way is was meant to be.   And they really don't have much choice because other than the grocery stores, gas stations, and restaurants, all other locally-owned businesses are closed on Sundays.

Plus, when people here go to church, they really go to church.   For many here, going to church on Sunday isn't just the one hour in and out that we Catholics are familiar with. Rather, here, their entire day often revolves around going to church.   In the morning, many will often go to Sunday school for an hour followed by worship services for an hour and then maybe some social time together after that. Then it's home for dinner and relaxing or visiting (you won't hear many lawn mowers here on Sunday afternoons).  Come evening, they frequently head back to church for evening services.   I can't help but admire their devotion considering that for us Catholics, it's one hour of Mass on Sunday and Lord forgive the poor priest who dares go more than 60 minutes and cause us to miss the best parking spaces at the local Cracker Barrel.  And going back in the evenings for more prayer?  We wouldn't think of it!

And then there's Wednesdays.   In most areas, we Catholics are blessed to have weekday Masses offered but how many of us take advantage of them?   If we make it to an extra weekday Mass, say, once a week, we're feeling pretty good about ourselves.   But in the Bible Belt, all Wednesday evenings are treated like a mini-Sunday.   In order to avoid conflict with the local prayer services being held at the myriad of churches in the community, no other community activities are scheduled.  If you belong to Little League, Girl Scouts, Boy Scouts, Senior Citizens, VFW, or any of the other civic groups, you can count on there being no games or meetings or other events on Wednesday evening.   Nothing is planned that may impede people from being where they need to be that night, namely, in church and if something like that was planned, very few if any would show up.  You don't show up at a ballgame when you should be in church, right?  How many times have we, as Catholics had to choose between going to a weekday Mass and other extracurricular activities?  Here, one night of the week, those other activities have been mostly eliminated in order to avoid that conflict.  It doesn't mean everyone takes advantage of it, but it does set  a nice example, if you ask me.

2.   God is given his due.   When you live in the Bible Belt, you find that God is never far from people's minds.   What I mean by that is that you will not see many social gatherings in which there is not at some point, a reference made to God.   For example, during music festivals (of which we have many), you can be assured that there will be a gospel song or two.  And there is to be no dancing during these gospel selections, no matter how lively a tune they may be (and some of them are pretty lively). Not that dancing in itself is considered sinful (well, a few people may still feel that way) but mostly because dancing during a gospel tune is considered disrespectful much like refusing to stand during the national anthem would be. So you pause during the gospel songs, maybe take your hat off, and listen to the words, because those lyrics are about us and the Almighty and who would want to distract anyone from that?

Then there are the many gatherings at which food is involved.  Even if it is not a family gathering or church gathering, you can still count on someone leading a blessing before we all chow down.  Nobody questions if it is the PC thing to do or not.  We just do it.  And it's not the 10-second kind of blessing either.  No, it will be extemporaneous and heartfelt and your biscuits just might get cold.

3.  People are proud to be Christian.  There aren't many folks here who hide their faith.   A few days ago, I was at a ballgame and saw a lady with a t-shirt on that proclaimed in large letters "Saved by Grace".  It brought to mind another t-shirt I saw a woman wearing while I lived in the (not Bible Belt) midwest that said "Too Many Christians-Too Few Lions".   Think about that message for a second and it should make us all shudder.   Obviously, I'd rather live in a community where the former and not the latter is considered acceptable.   And if the "Too Many Christians" lady wore that shirt here, she'd probably be approached in a very friendly manner by more than one person who was genuinely concerned about her salvation.  She'd likely be invited to attend their church and encouraged to seek a different message and a different path. 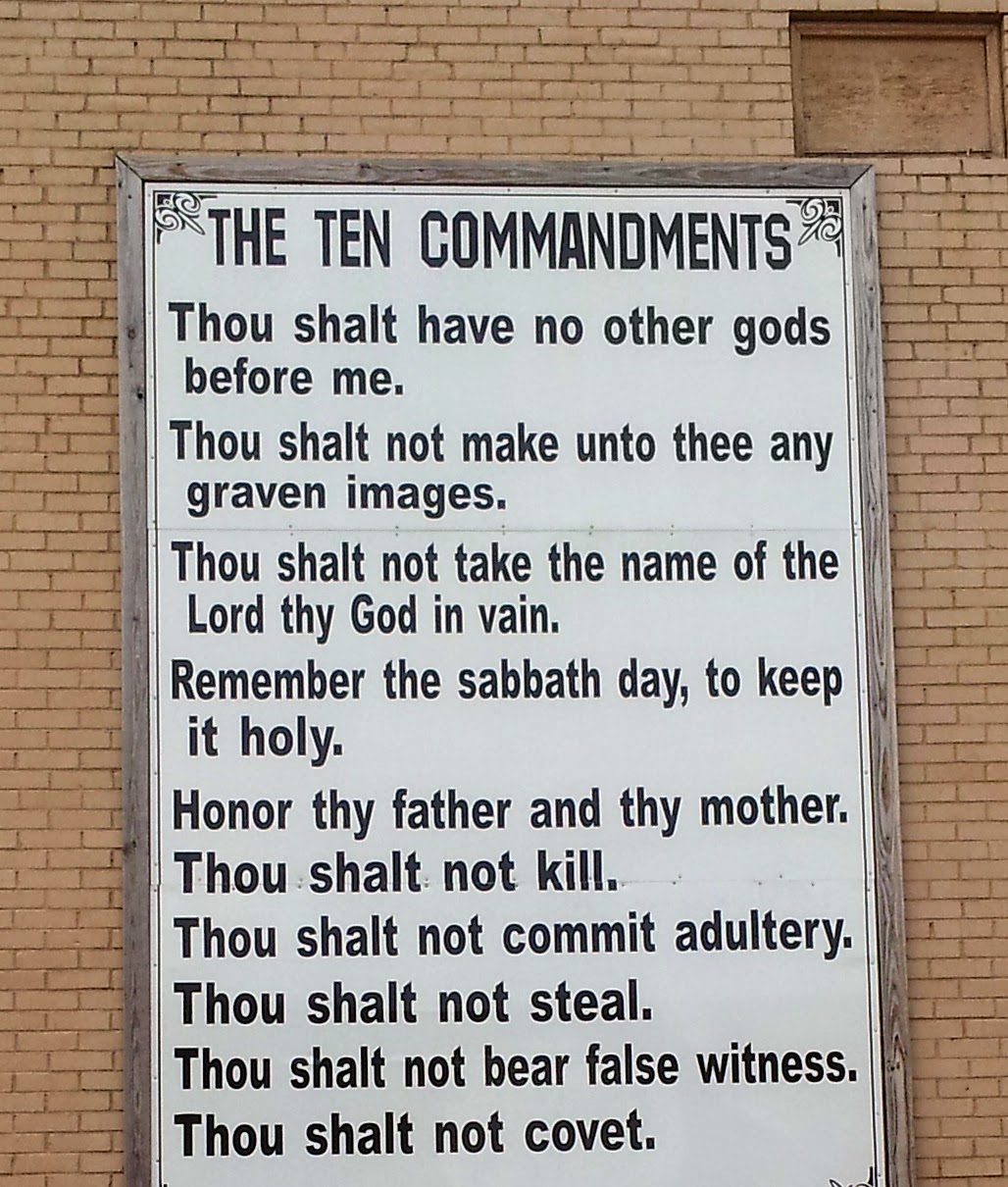 On a day to day basis here, it's hard to forget what is most important.  When you go into a store, the storekeeper is just as likely to say "God bless" as "have a nice day". When you drive down main street, you'll see our large billboard with the Ten Commandments posted on it (it was hung there after the Supreme Court made us remove them from the courthouse).   They may not be the exact same Ten Commandments we Catholics are familiar with, but considering most people today aren't familiar with either version, it's nice to see them just the same.

4.  They know how to support each other.  It's unbelievable just how many benefit suppers, bake sales, singings, and other fund-raising events are held here when someone is in need.  I've seen advertisements for community fund-raisers fill up an entire page of our local newspaper, which is saying something considering newsworthy items barely can do that.  For example, last summer, a local volunteer firefighter was seriously injured when he entered a burning home in an attempt to check for inhabitants.   Within hours of his accident, there was a Facebook page created in order to garner prayers and donations for his family.  In a few days, the page had hundreds of followers and in a few weeks, there were thousands of followers. His cause was the most talked about subject in town.  Just about every county organization held a fundraiser for his family including the local McDonald's.   Churches held prayer vigils on his behalf and public events were marked with a moment of silence for him and his family.  In the end, he succumbed to his injuries and his funeral service was so large, it had to be held in the local high school gymnasium.  The funeral procession went for miles and people who never even knew him lined up along the road as it went by, many saluting.  People here know what real support looks like.

5.  They love their church and their faith so much that they work hard at sharing it.  There is no shortage of revivals, church singings, or invites to church.   All are intended to bring people closer to God and share the joy they have found in their faith.   They are not only genuinely concerned for their neighbor's physical well-being, but also their spiritual well-being.  Granted, this makes being a Catholic a bit tricky sometimes, considering many here do not consider us "saved", but I also find it heartening that someone would actually have any concern for my soul.  It is always with sincere appreciation that I refuse invites to other churches and often I think to myself, if I wasn't already a Catholic, I just might take them up on the offer.  It's a good reminder to us that while we Catholics have been recently trying to jump start our own "new evangelization", our friends in the Bible Belt never forgot how to do it in the first place.


Considering all this, it's probably no coincidence that the Bible Belt is also known for its hospitality. "People here will walk up and talk to you about anything," my husband commented one day after a fellow walked up to him in the store and started telling him all about the row of 'taters he'd planted that day and about how he likes to eat his green onions (in a glass of milk and cornbread, in case you're wondering).   It's also probably no coincidence that during political elections, we are almost always the "red states" which might be why some people are looking for a lot more lions. However, it is also why, even though I'm a Catholic and will always be a bit of a local oddball,  I'm pleased to call it home.