This is a bit late, but it's still Friday so here goes...


-1-
Since last Sunday was Divine Mercy Sunday, I thought I'd share a little Divine Mercy story of my own.
When I married Tom, who at the time was not Catholic, a dear Catholic friend took me aside on our wedding day and whispered in my ear "Make sure you take Tom to Mass on Mercy Sunday." At the time, I didn't even know when Mercy Sunday was.   But I made it a point to find out and took her advice.  Tom did go to Mass with me that Sunday (he actually went to Mass with me every Sunday even before he converted) and I made it a point to pray especially for his conversion. Two years later, on the Easter vigil, he joined the Church. Divine Mercy Sunday has always been extra special to us ever since.   So, is there someone you know who has left the Church, or who you hope joins the Church?  Take them to Mass on Mercy Sunday!

This year, on Divine Mercy Sunday, I found this little red azalea bush tucked away under the sea of white azaleas blooming in our yard. 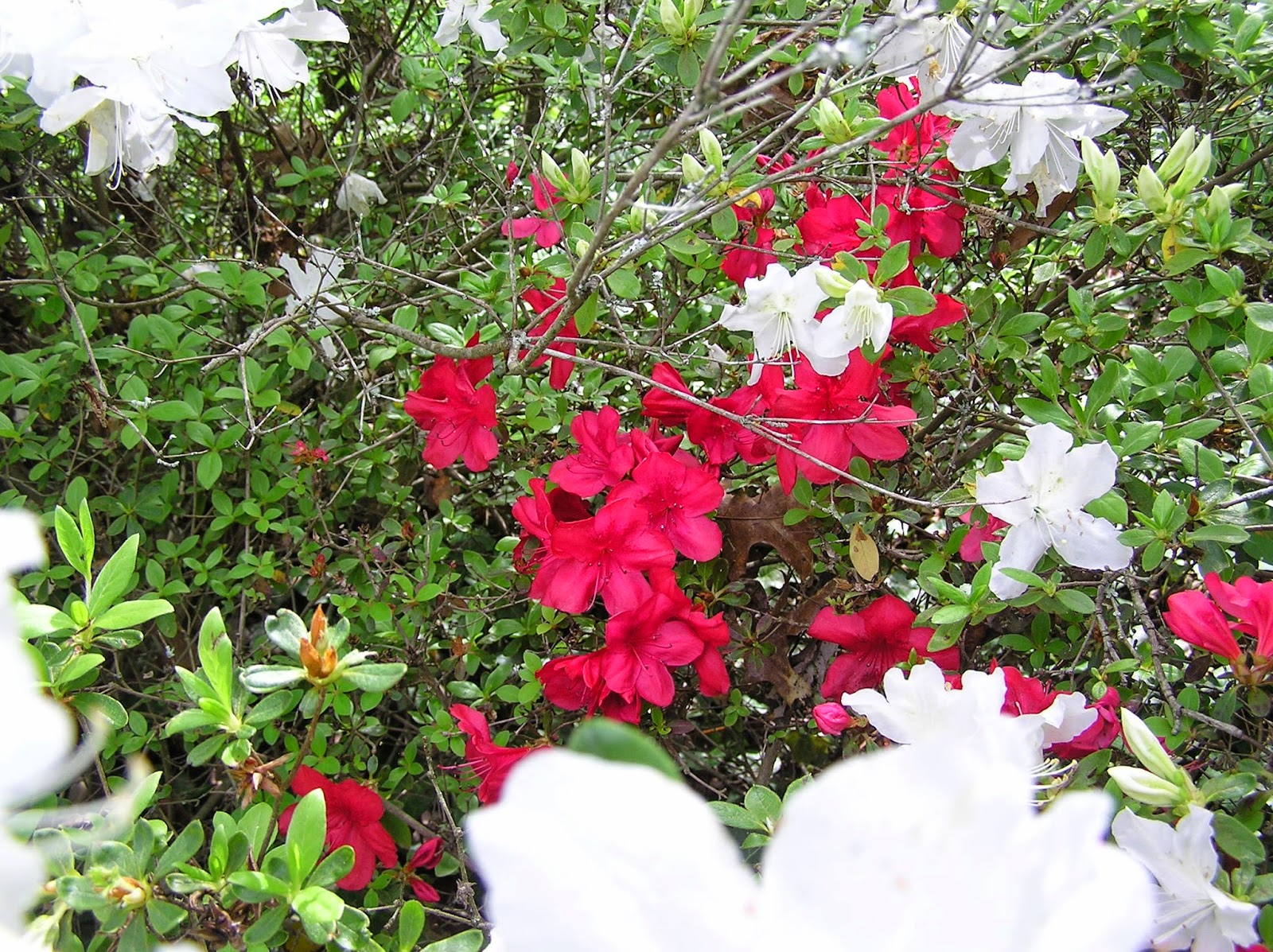 The white ones had been in bloom for a few days but the red one just showed up in bloom on Sunday and before it bloomed, I never even knew it was hidden under the others.    It will forever now be known in my eyes as our "Divine Mercy" azalea.


-2-
Of course, this past Sunday was also a special day for all us Generation Xers who knew Pope John Paul II as "Our Pope" because he's the one we grew up with, and in a way, for many of us, he was our "Catholic Grandpa".    Like so many, I feel blessed that I got to see him (albeit from a distance) before he died.
Of the many things we have to be thankful for that came from this great pope, I personally am most thankful for the Catechism.   When it finally came out in print again, I was a young college graduate on the verge of leaving the Church.  I wanted to learn about the Church but everywhere I turned, I saw only poor examples and got few answers. I didn't know which books about the Church could be trusted, or which Catholics I could trust.  But for some reason, I trusted this Pope, and I poured through the Catechism during the days after it was published.  I still remember making a special trip to the book store to purchase my copy.  And gradually, all the "rules" I'd grown up with began to make sense and I saw the beauty in my faith. Thank you, St. John Paul the Great, for saving me and so many others by catechizing a mostly uncatechized generation.


-3-
This past week marked the feast of another great saint, too.  St. Gianna Beretta Molla.   I can't count all the prayers and novenas I've said to St. Gianna.   She got me through some difficult days, especially when I thought we may lose our baby John.   Where would I be without these saints to turn to?   Thank you, St. Gianna and please pray for all of us who struggle to become mothers and to be mothers.


-4-
There were two momentous events that happened around here this past week.  I already posted about the first here.   We signed the offer and hopefully things will go well and our septic system will pass inspection (yes, I am really praying for that particular intention!).   I am gradually accepting the fact that this really narrows our time frame now for adopting to a mere three weeks.   A baby suddenly becoming available in the next three weeks? Now that would be a miracle.  I've already had two miracles, so I probably shouldn't expect a third.   I know every mother has to accept that her family is as big as it's going to get at some point in time.  That, and I know that if we adopted a third, in a few months I'd want a fourth.  So I need to work on being happy with what I've been given, which I know is a lot!


-5-
The other momentous event is that I've started potty training with Joah...again.   I had this theory that he'd be a piece of cake because he tries to do everything his brother does and his brother has been potty trained since he was a little over two.  But Joah is his own little person and believe me, does things in his own little way and in his own time.   We started down this road last fall, had some success, but then there was major regression so I pulled the diapers out and decided to wait until spring.   Now that he has mostly recovered from the trauma of surgery and re-locating to a new home, we are trying it again.   I am pleased to say that he is doing very well so far.   I am taking the approach of just letting him take the lead and I say almost nothing about it.  Hopefully I didn't just jinx us now by blogging about it!


-6-
I also found out that there is a name for what I described in my last Quick Takes when I somewhat desperately requested advice for dealing with three-year old siblings who feed off each other's (bad) behavior.  It's called "Twin Escalation Syndrome" and apparently it has driven many a mother nuts, including me.  Part of the remedy seems to be to do as much one-on-one time with them as we can and to separate them more often.  They really crave having a parent to themselves, it seems.   Anyhow, I'm still (always) open to advice if anyone has any.


-7-
I'll end with a photo I took of this little gem we have blooming in the woods behind our home. It's a pink lady's slipper orchid and I am thrilled to have them!  Joah loves to watch the "humblebees" as he calls them fly in and out of the slipper part.   We're also still enjoying the return of the spring migrant birds and this week, were treated to a Cape May warbler and a Chesnut-Sided warbler in the front yard.   Both are relatively uncommon here so we feel privileged to have them stop by for a visit.   I can't wait to see what other critters this spring brings to our new home!   I expect a bear any day now.

Have a great weekend.  Check out Jen's blog (and check out her new book, too) for more Quick Takes.