It's been a while since I did a Quick Takes and linked-up with Jen over at Conversion Diary so here we go.


--1--
I seem to have left off on the family updates somewhere around our wedding anniversary, so let me just follow that up by saying that Tom and I had fantastic anniversary!   Believe it or not, it was the very first time we'd been away together for more than a few hours since we became parents. Yep, our first time away together. alone. all night. in four years and two months, not that we're counting. I didn't care where we went or what we did, as long as we were together, just the two of us, and it felt like old times.

The boys did great with their grandparents while Tom and I hid away in the Great Smoky Mountains. Any anxiety I had about leaving the boys without a parent was quickly replaced by the long-forgotten joy that came from being able to have uninterrupted conversations and peaceful meals with my husband.  Because we struggled for so many years to have children, it has taken us a while to reach the point where we feel comfortable being away from them for long periods.  But it does take a toll on the marriage sometimes and after four years, it was reassuring to find out that we still really enjoy each other's company.   I promise we won't be letting four more years go by until we do it again.


--2--
On October 22, we decided to make something Polish to commemorate St. John Paul II's very first feast day.   I have a good friend who makes wonderful perogies from scratch, but after seeing the process, I decided that tackling those would be way beyond my cooking abilities.  So, instead, I opted for the only other Polish food I know of...store-bought kielbasa. We picked a bunch of kale from Papaw's garden and cooked it up with some kielbasa and carrots and served it with cornbread and baked apples on the side. 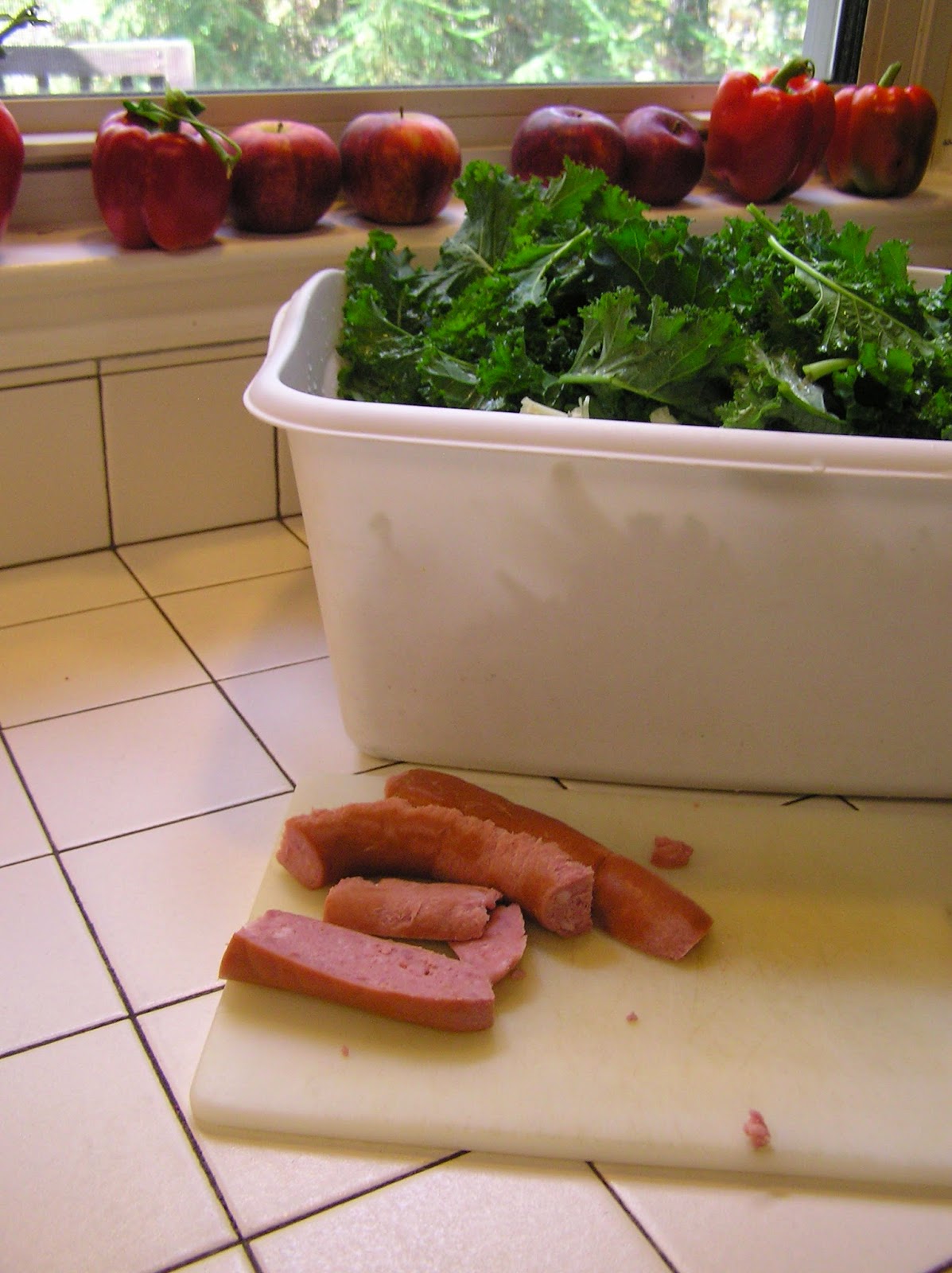 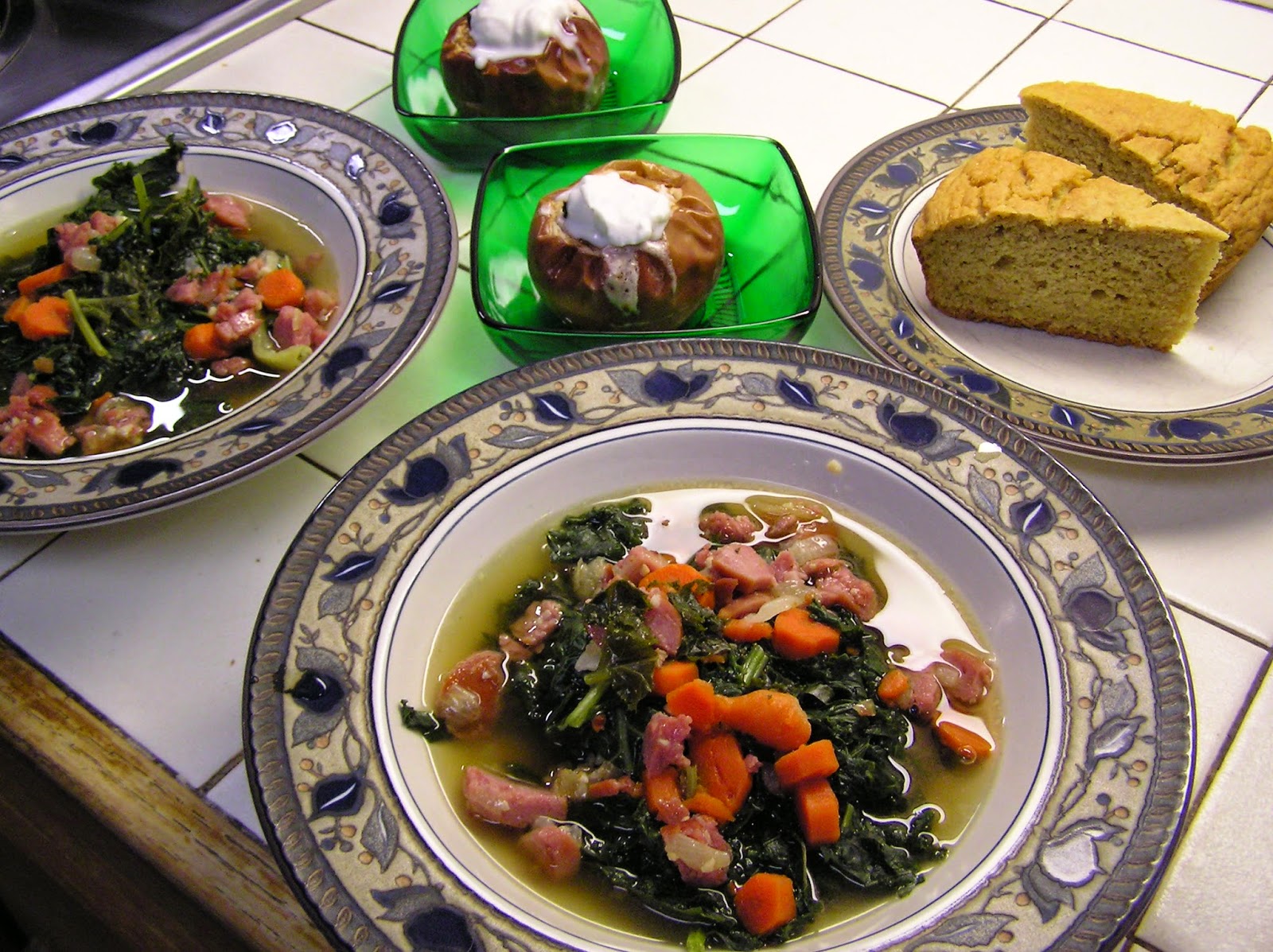 Here in the south, greens cooked up like this and served with cornbread or cornmeal dumplings are called "pot likker"and "corn pone", so I guess you could say our dinner was "Pole Food meets Soul Food" cuisine.   How appropriate is that!


--3--
And then there was Halloween, the secular version.  Before my boys were of the age where they understood anything about Halloween, especially the "trick-or-treating" part, our Halloweens were spent in the peaceful bliss of having a bit of candy at home and watching The Great Pumpkin together.   Not anymore. Thanks to Halloween parties planned at their preschool and the local library, I jumped onto the proverbial bandwagon and we made costumes, painted pumpkins and ate way too much free candy.  John was excited by the costume idea and declared that he wanted to be a scarecrow.   When I asked him "why do you want to be a scarecrow?" he replied, "because it's my favorite kind of bird". Nothing gets by that kid!   Joah, who is eluded by most current affairs, seemed completely uninterested in the concept of wearing a costume until I suggested he be a cat. He was all for that, mostly because he often thinks he is one.  Seriously.   Pretending to be a "kitty cat" is one of his favorite games.  Please tell me this is normal for a three-year old. 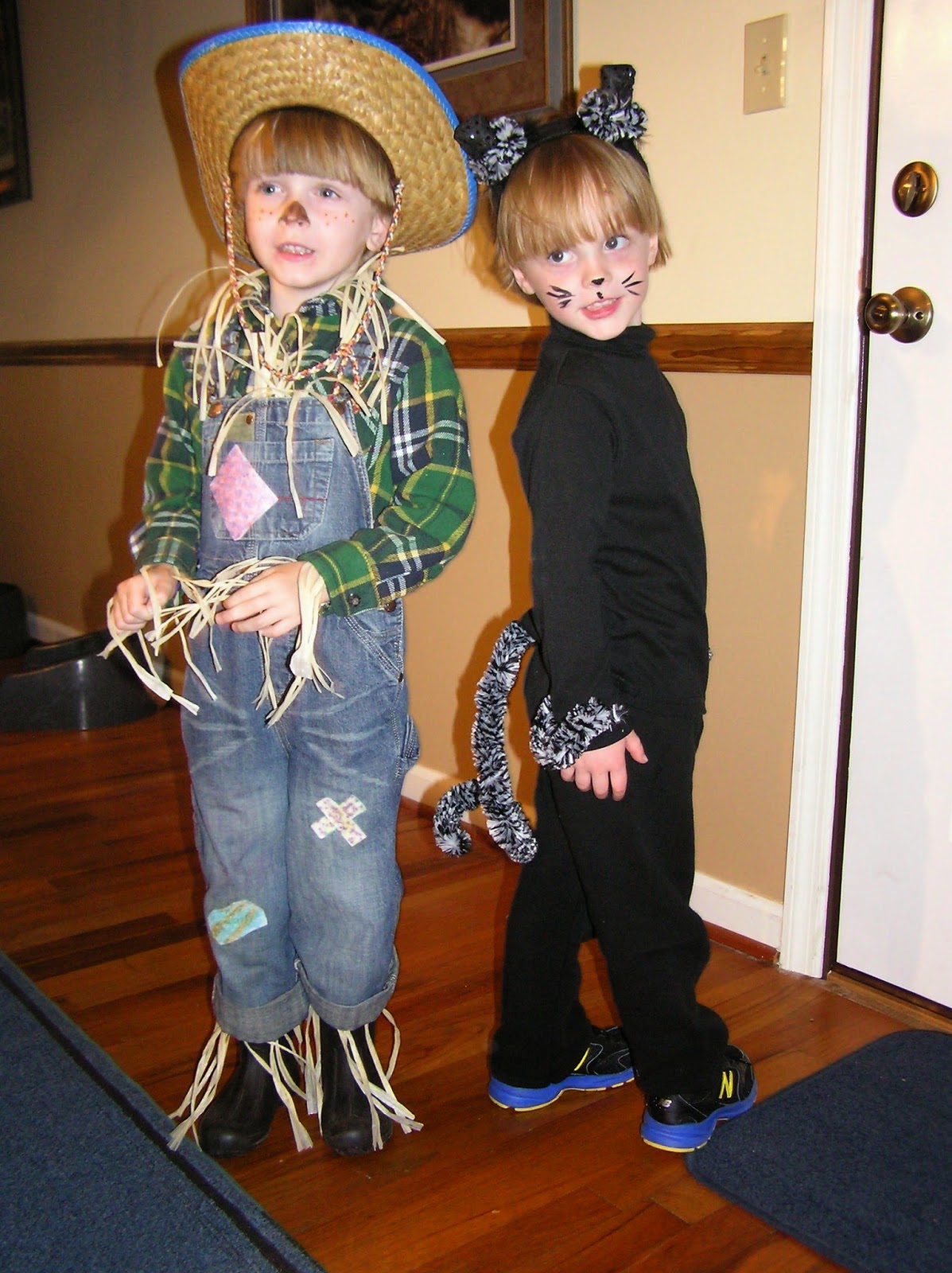 --4--
To balance out celebrating the secular version of Halloween on October 31, we followed up with some little saints costumes for All Saints Day.   I transformed Joah the Cat into a little St. John Bosco and John enjoyed dressing up as his patron saint, John the Baptist.   He particularly relished in referring to himself as "John the BAD-tist" and telling everyone "I eat bugs".  The boys wore their saint costumes to a church party on Saturday night and again to Mass on Sunday. After Mass, everyone enjoyed "St. Benedict's Cross" cookies (the idea for which I completely stole from Kerri, although when Joah saw them, he exclaimed "Look at all that treasure!") and "Blood of the Martyrs" punch.   It was the first All Saints/Souls Day party for our little parish but hopefully not the last. 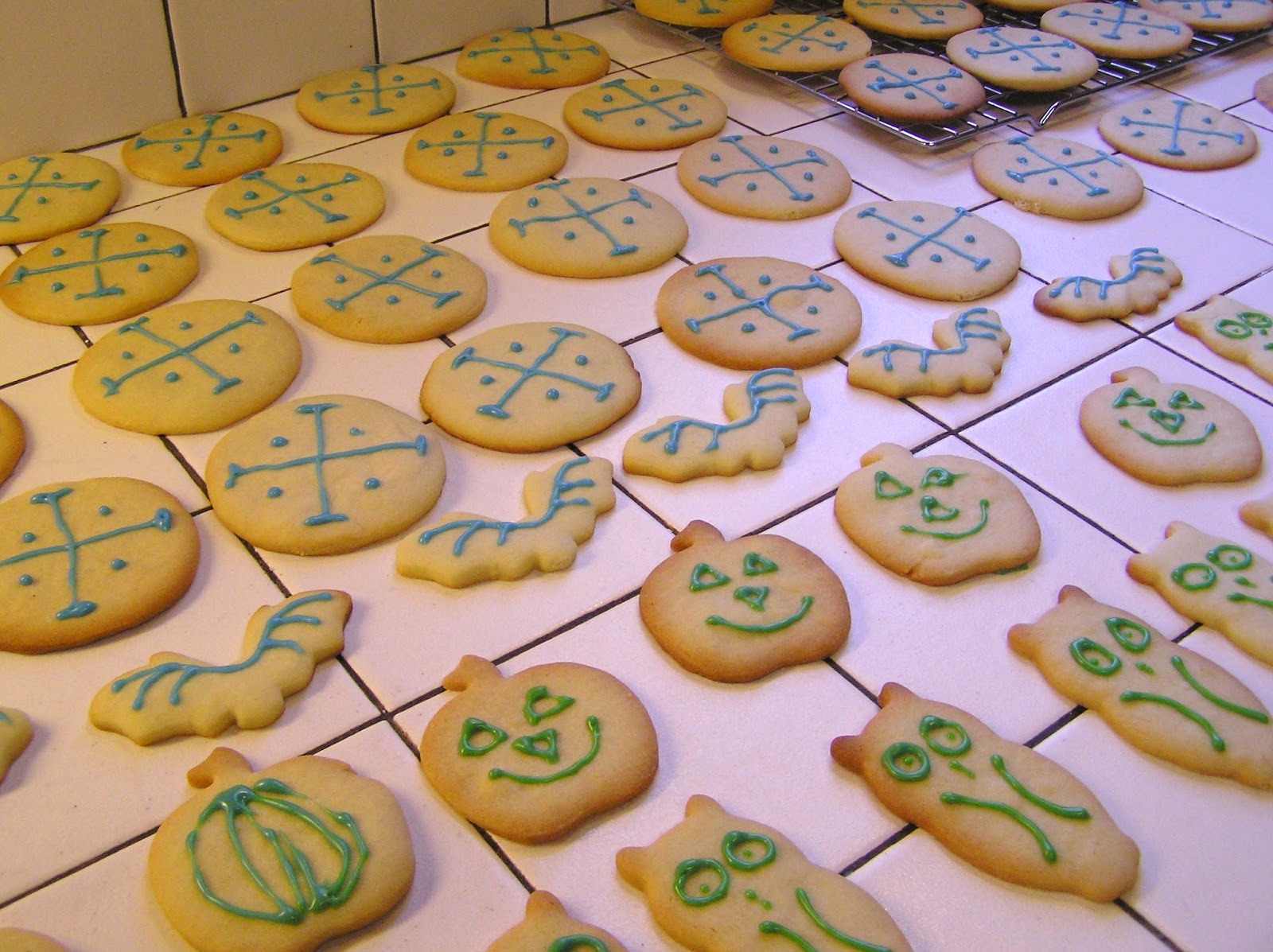 --5--
In between the costume making and cookie making, we also have been plugging away at the mountain of paperwork required for our adoption home study.   I am pleased to report that as of a week ago, all paperwork has been completed and forwarded to our agency.   Now, we await our home visit.   I have grand visions of having all of our home study completed by Thanksgiving but a more realistic plan is probably Christmas.  I just want to be back on the waiting list so so badly! Right now, it feels like we are in a weird kind of limbo but I keep telling myself God will give us the right baby at the right time and I don't need to get too anxious about all the time that has passed (almost two years now) since we made the decision to pursue adoption again.   Many couples have waited much longer. Such is the nature of adoption these days.

--6--
And speaking of adoption, did you know November is National Adoption Awareness month?   If there was ever an issue that needs some serious promotion and marketing, it is adoption.   Please help spread the word because adoption is one of the most sincere gifts of love that one person can offer to another.   It offers so much hope to so many who may be feeling like they are in a hopeless situation.  I hope to find the time to write a blog post devoted solely to this subject before the month ends.   There is so much more that we could be doing to promote adoption in a culture that still sees very little beauty in it.

--7--
So, that's about it for my October re-cap. I am thinking now that October might be my favorite month of the year.  For me, it's always a toss up which month I love more...October or April.  Even though it was the wettest one on record for us, this past month was still amazing.  I can't remember the fall colors ever being prettier and we had some gorgeous days mixed in with the rainy ones. Now the fall colors are mostly gone, and when we awoke on the first day of November, we were greeted with snow on the mountains and our first hard freeze. It was as if Mother Nature was saying "sorry folks, October is over, time for winter". 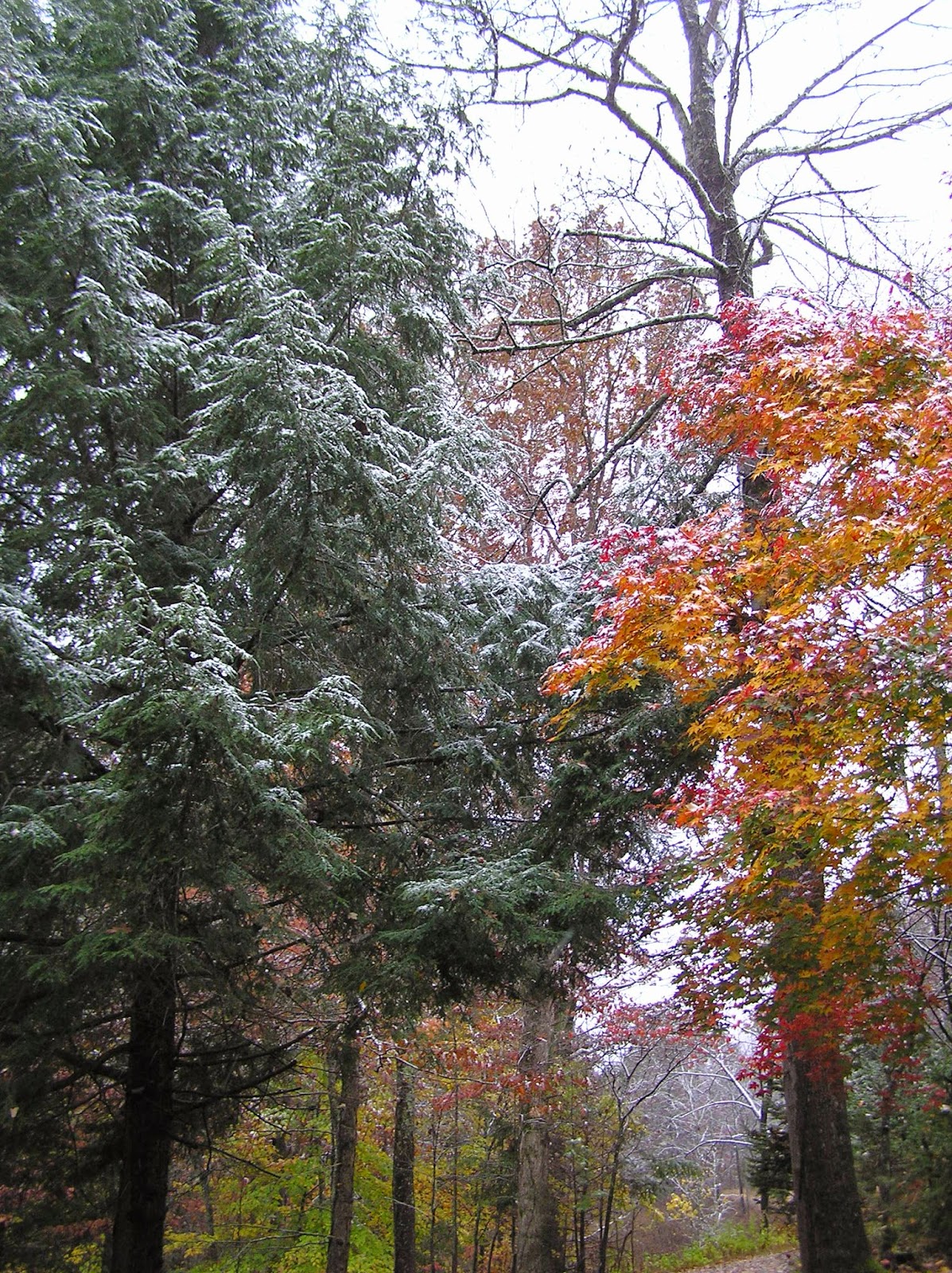 Of course, she was only teasing us...for now. Everyone in these parts knows that the first hard freeze of autumn is followed soon after by the delightfully warm days of Indian summer, during which Mother Nature will tease us again.  But then the jokes will be over and the gray cloudy skies that herald in an Appalachian winter will be upon us.  October will soon become a distant memory as we huddle next to the wood stove, longing for sunshine and dreaming of April.