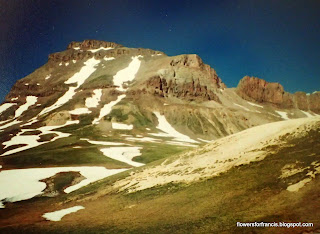 I trudged up the narrow footpath, slowly putting one foot in front of the other, stopping every few steps to suck in the cool mountain air and to look up.  Ahead, I saw only more rock, more ice, and more mountain; the mountain that went up and up with no end in sight. With my hand, I shielded my eyes from the glaring sun that pierced through the deep blue sky, and through my squinting, I could make out the distant clouds that would soon bring the afternoon thunderstorms.  My friends and I had only a few hours left to make the summit before the distant clouds unleashed their powerful force.

“This was supposed to be fun,” I said to myself as I took another sip from my self-rationed water. My head was pounding, but the light-headedness I’d succumbed to the day before during my first climbing attempt had mostly subsided.  Now, I only needed to conquer the breathlessness that came from being unaccustomed to the high altitude.  I looked back down at the ground and focused on the path in front of me and my next step.

I was 28-years old and trying to make it to the summit of Mt. Uncompahgre, a majestic 14,321-foot mountain in the Colorado Rockies.  The day before, I’d attempted to climb its sister mountain, Wetterhorn, but had been forced to stop less than a hundred feet from its summit due to extreme dizzy spells. I had sat on a rock just below its pinnacle while my three comrades summited without me.  I tried to convince myself as I sat there, looking up at them from below, that the view from my location was just as good as theirs and that making it to the top didn’t really matter that much, but still, I felt disappointed.  I had not reached my goal, and my body had failed me, and I was not accustomed to feeling like a failure, even if it was for the sake of my own safety.

Now, as I trudged up Uncompahgre in my second attempt to summit my first fourteener, I was beginning to feel defeat closing in again.  This time, my body was willing, thanks to another 24-hours I'd had to acclimatize to the altitude, but my spirit was weak. Suddenly, the effort and fatigue no longer felt like they had any meaning, and my desire to summit meant nothing to anyone, including myself.  If I decided to stop now, nobody would blame me, and really, no one would care. I could just turn around, I told myself, and walk back to camp and take a nap, and have a perfectly good time while I waited for my friends to return. Nothing was worth so much effort, I told myself.  This was not supposed to be so hard.  Let others do it, I said to myself.  They are in better shape, enjoy it more, want it more.  I just…can’t.

And then an image came to my mind.  It was from a photograph that I’d seen not long before I’d made this journey to the Colorado mountains.  It was a picture of a young man, about my age, standing atop a mountain with snow and peaks surrounding him.  He looked strong, and confident, and full of spirit and life, and everything that I wished I could be, as he stood on top of that mountain. And more than anything, he looked like someone who never quit and who faced every physical and spiritual challenge with determination, faith, and fearlessness. The look on his face seemed to say, “I can conquer anything,” and from what little I knew about his life, he had.  But, I also knew that he had not done it alone.

And so, trudging up that mountainside that day, I decided to call upon him.  To ask him to walk beside me each step until I reached the top.  Surely, I thought, he too knew the feelings of fatigue and disillusionment that I was facing in that moment.  I pictured him in my mind, climbing with me, step by step, encouraging me to not quit and to not lose heart.  And slowly, my spirit began to improve, and I began to focus on the thrill and jubilation that would come when I reached the endpoint of my journey up the mountain, instead of focusing on the agony of the journey itself.

Before I knew it, I was there.  After thousands of steps, each pushing upwards, suddenly, there was no more climbing left for me to do.  The ground had leveled out, my breathing became easy and relaxed, and I was able to rejoice and relish in the 360-degree view around me, in which I was elevated higher than anything or anyone else in my surroundings.  To be standing above all else, even the birds, was an incredible feeling and worth every tortured and painful step.

I never climbed another fourteener after that.  Life went on and I returned to the low lands.  A few years later, I would be married, and soon after that, I would be climbing spiritual mountains much higher than any Colorado fourteener.  And again, I would find myself facing defeat, thinking none of it matters and nobody really cares, not even me.  And more than anything, I would feel incredibly alone, climbing a mountain that nobody else could see.

But as I learned on that mountainside many years ago, at those moments when the struggles feel insurmountable and the mountains too steep, I can turn to divine help.  I need only to recognize that many have climbed these same mountains ahead of me, and if I ask them to, they will help me make it to the top.  They will walk with me, maybe even ahead of me, and show me the way.  They have made it to the summit and more than anything else, they want to share the view with me.

And if I ever doubt this, I need only to recall my climb up Uncompahgre many years ago. Because little did I know, on that 4th day of July, in 1997, that it was also the feast day of Blessed Pier Georgio Frassati, upon whose intercession I had called upon that day to help me make it to the top.